Looking up, the asterism of the Summer Triangle consisting of Altair, Vega and Deneb is still very prominent, see Moira’s article, and probably the first stars you’ll see as the sky darkens. This is a great time of year to see objects of interest in the constellations at the zenith: Cygnus, Lyra and Cassiopeia.

The Milky Way goes right over your head so there are lots of star clusters to look out for. The most obvious one will be The Double Cluster (NGC 884/869) situated between Cassiopeia and Perseus. In addition, there is Caroline’s Rose, NGC7789, and M103 in Cassiopeia, M34 in Perseus, M29 and M39 in Cygnus for starters. The area is a joy to behold in binoculars on a dark night. There is the globular cluster M62, sometimes known as the Flickering Globular as it seems to change brightness – purely an optical illusion. In addition, there is the North America Nebula complex, NGC7000, in Cygnus and the California Nebula, NGC1499. With a tracked 70mm lens you could capture both NCC7000 and the Pleiades, M45, in one shot, although that combination might be better later in the evening when M45 is higher.

The Square off Pegasus is generally quite obvious. This acts as a good signpost to M31. My preferred solution to find M31 is to star hop from the corner nearest Perseus. This star is Alpheratz, magnitude 2. Following the line of the top of the square towards Perseus there is a fainter, magnitude 3 star, then and slightly higher is Mirach at magnitude 2. Turn a right angle ‘up’ towards the pole and at the second star (both around mag 4) you are almost there. With averted vision M31 should be visible to the eye if the sky is dark, and certainly in binoculars, as a faint smudge. Even in a reasonable telescope, it isn’t much better – always a slight disappointment until you think what it is! Photographically, it is magnificent. For wide field imaging photographic targets, what could be better than M31, The Great Andromeda Galaxy and nearby telescopic M33.

Lyra is an interesting constellation. The Ring Nebula, M57, is a splendid fuzzy ring in a small telescope. Just 2° from Vega is The Double-Double, ε-Lyrae, a binary star in binoculars, but with a telescope each of these two stars is seen to be a double star itself. Whilst on double stars, you must look at Albireo, β-Cygni and magnitude 3.3, at the end of the neck of Cygnus, The Swan. It is situated at the opposite ‘end’ of Cygnus to brighter Deneb (magnitude 1.25). This is a beautiful low power telescopic object the brighter star golden and the dimmer one blue. 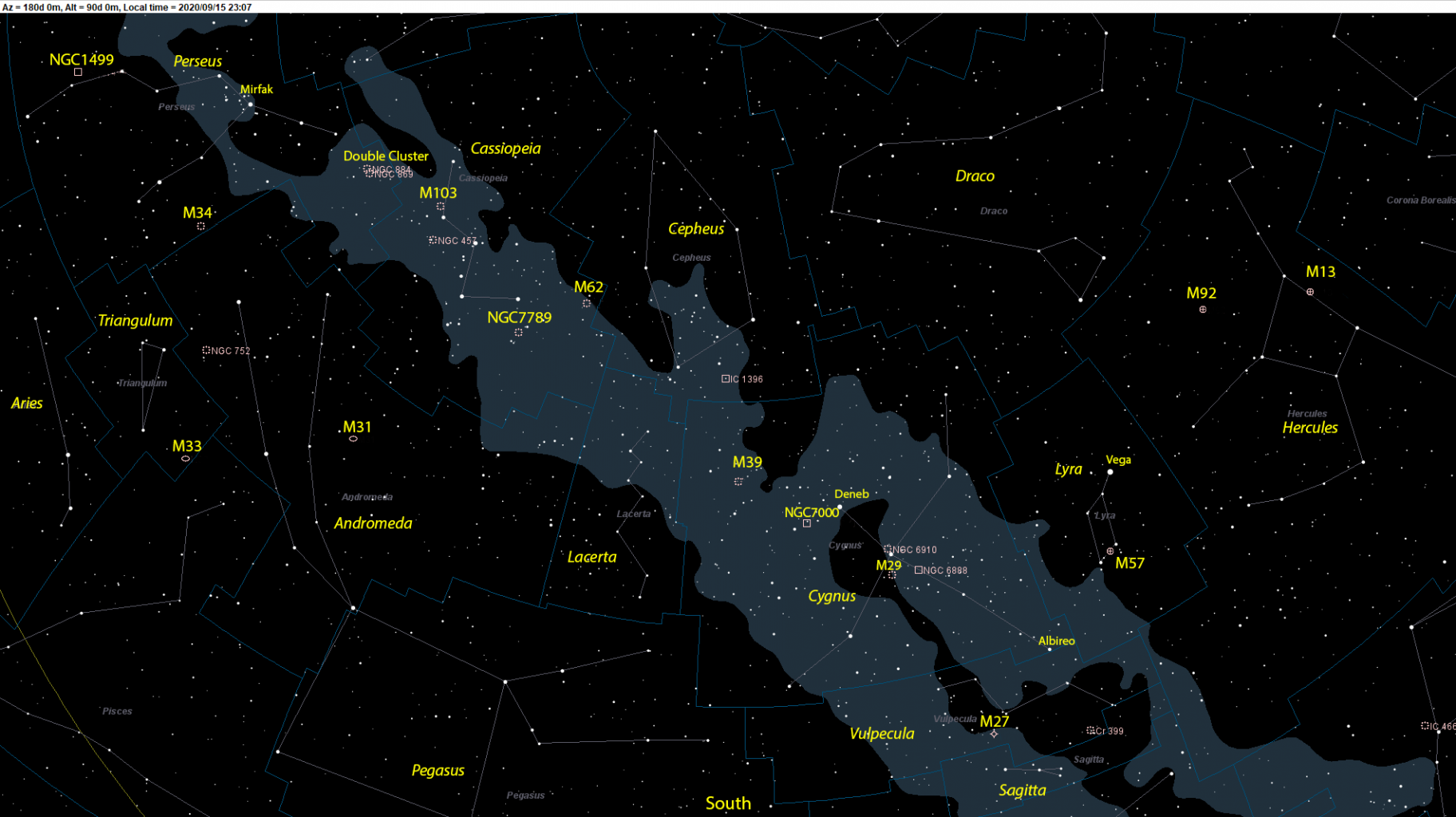 Looking up in September South at the bottom. Click for a larger image. 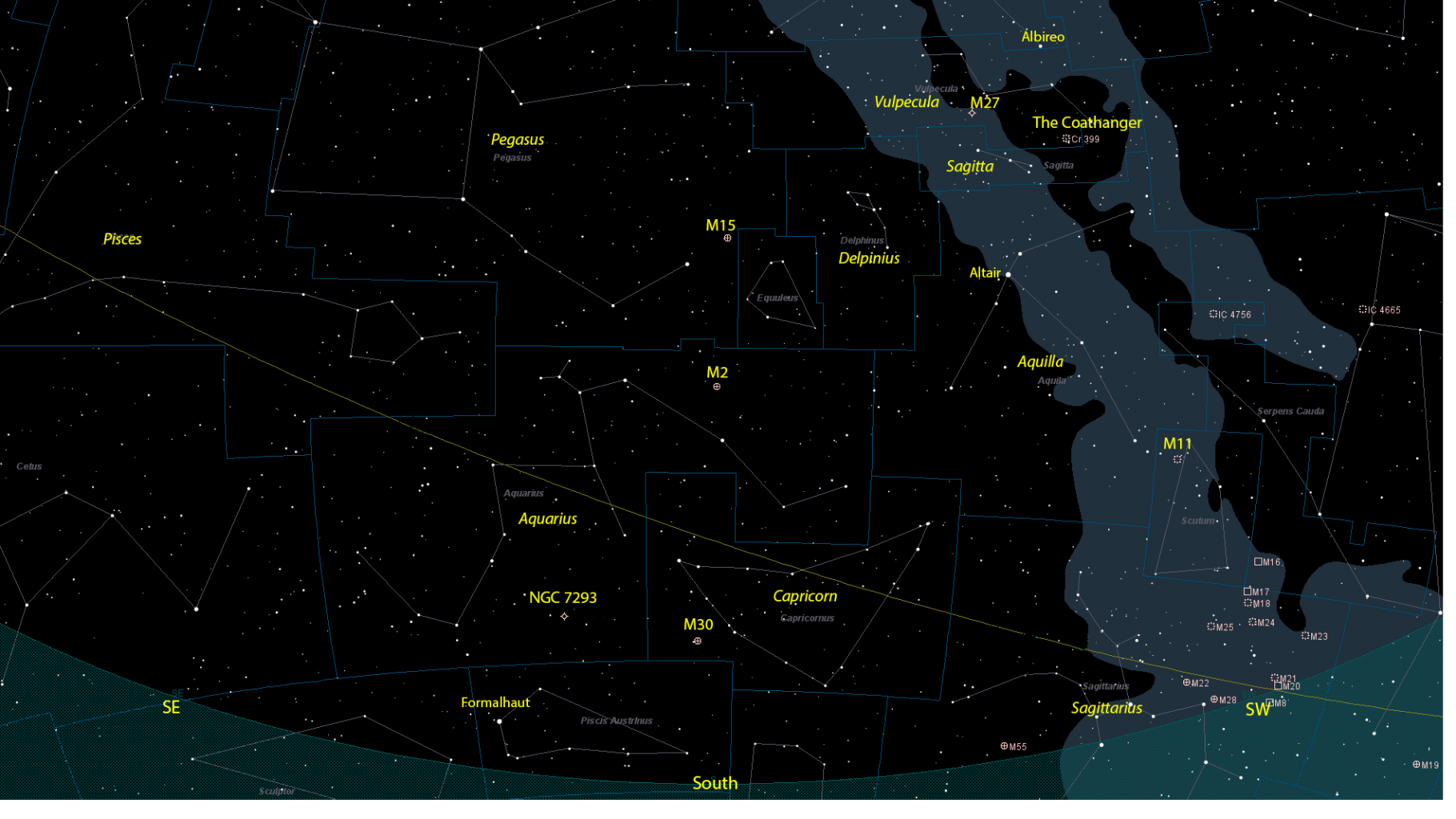 Looking South in September. Click for a larger image. 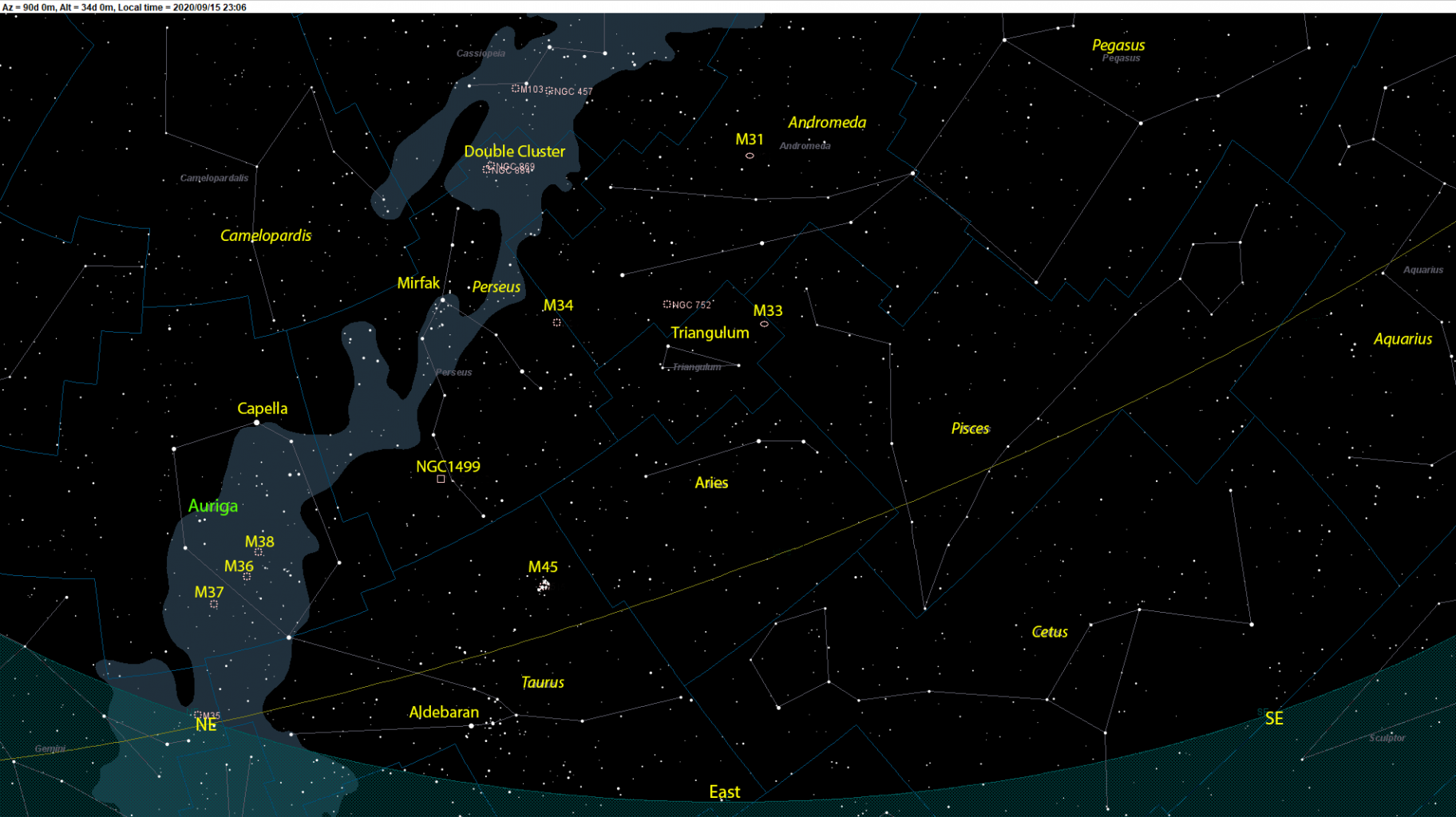 Looking East in September. Click for a larger image. 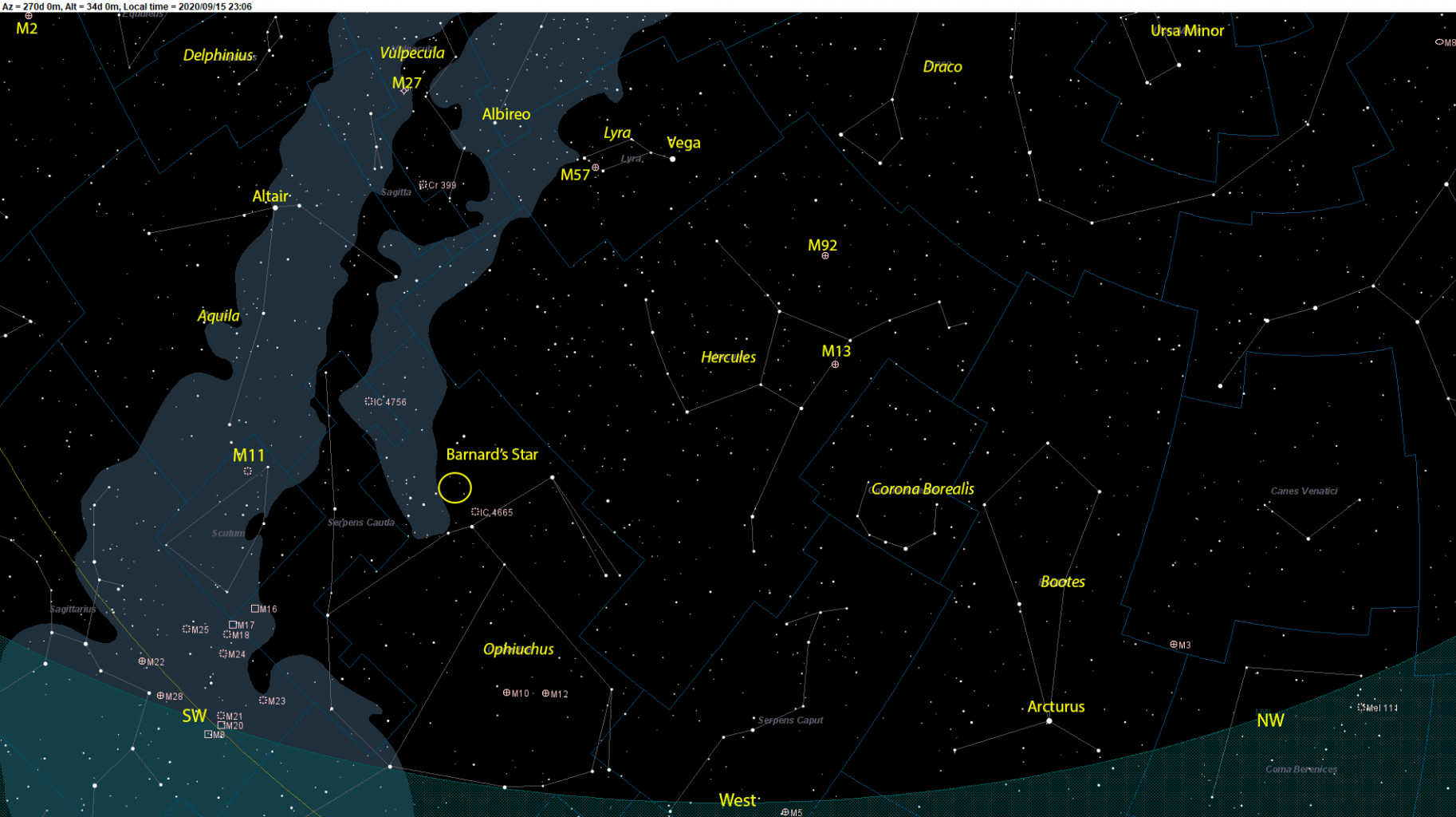 Looking West in September. Click for a larger image. 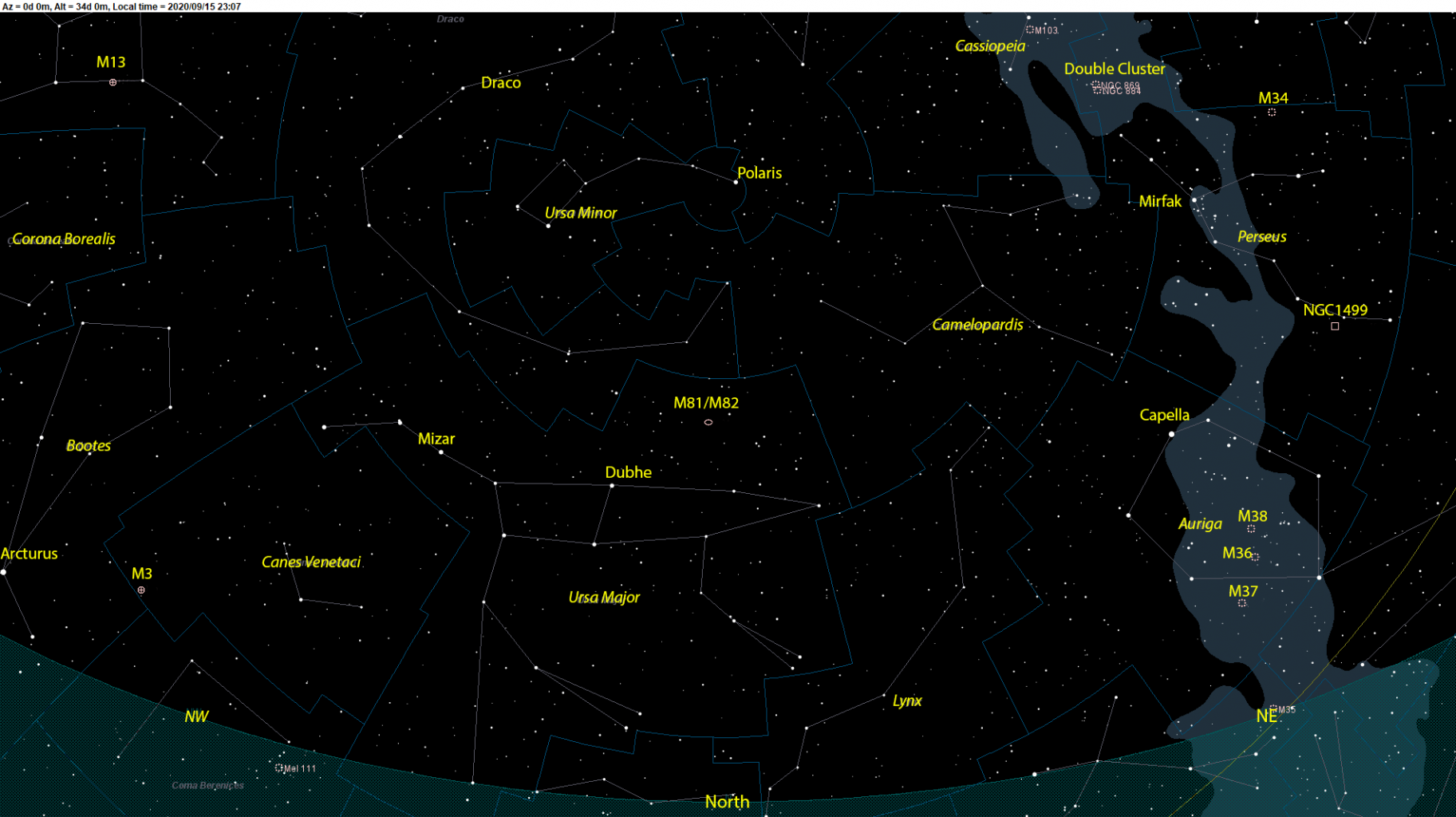 Looking North in September. Click for a larger image.