Draconids meteor shower – October 8/9 – radiates from the Head of Draco and worth looking for a day either side. Because Draco is almost overhead in the evening, this shower tends to be best in the early evening rather than morning. But it is an oddball as generally it doesn’t produce that many meteors per hour but is prone to intense outbursts of 100’s per hour some years. Unfortunately, the full moon coincides with peak activity.

Orionids meteor shower – October 21. Linked with Comet Halley. The moon is only 17% and waning so it will not get in the way too much. At best 10 to 20 per hour and usually better early morning. Tend to be fast-moving meteors which occasionally leave persistent trains and sometimes bright fireballs which might be visible over the bright moonlight.

We still have the fabulous Milky Way right over your heads and the asterism of the Summer Triangle consisting of Vega, Deneb and Altair (just off the chart in Aquilla) still very prominent. This is a great time of year to see objects of interest in the constellations at the zenith: Cygnus, Lyra and Cassiopeia.

The most obvious star cluster is The Double Cluster (NGC 884/869) situated between Cassiopeia and Perseus, a clearly visible double fuzzy patch to the naked eye. In addition, there is Caroline’s Rose, NGC7789, and M103 in Cassiopeia, M34 in Perseus, M29 and M39 in Cygnus for starters. The area is a joy to behold in binoculars on a dark night. For wide field imaging photographic targets, what could be better than M31, The Great Andromeda Galaxy and nearby telescopic M33. I saw M31 with my unaided eye from a very dark site recently whilst looking for aurora – it was huge, several times larger than a full moon when looked at with averted vision. Sadly, it is rather a disappointment through as eyepiece as it is so large and distended. I find the Square of Pegasus acts as a good signpost to M31. To find M31, star hop from the corner nearest Perseus. This star is Alpheratz, magnitude 2. Following the line of the top of the square towards Perseus there is a fainter, magnitude 3 star, then and slightly higher is Mirach at magnitude 2. Turn a right angle ‘up’ towards the pole and at the second star (both around mag 4) you are almost there.

In addition, there is the North America Nebula complex, NGC7000, in Cygnus and the California Nebula, NGC1499 in Perseus. With a tracked 70mm lens you could capture both NGC1499 and the Pleiades, M45, in one shot.

The crowning glory of planetary nebulae, the Ring Nebula, M57, is still a splendid fuzzy ring in a small telescope. Just 2° from Vega is The Double-Double, e-Lyrae, a binary star in binoculars, but with a telescope each of these two stars is seen to be a double star itself.

Whilst on double stars, you must look at Albireo, b-Cygni. This is a beautiful low power telescopic object the brighter star golden and the dimmer one blue.

If you have a telescope, look for the planetary nebula M27, The Dumbbell Nebula, in Vulpecula. Also, try and find the fine globular cluster M71 in nearby Sagitta. If you like globular clusters try for M13 and M92 in Hercules.

Looking south, there are two bright and large globular clusters M2 and M15, both about magnitude 6 and 12’ in diameter look good in binoculars or a small telescope.

Low in the south, transiting at 22:00, is the Helix Nebula, NGC 7293, which makes a wonderful photographic target through a telescope. This is quite difficult as it is only 15° above the horizon. Nearby is the globular cluster M30.

The sprawling constellation Cetus, The Whale, is surrounded by other water-related constellations: Aquarius, Pisces, Eridanus [not visible on the chart but lower (south) and yet to rise]. Cetus contains one remarkable reddish star, the variable star Mira (o Ceti), “the wonderful variable star Mira” which was the first non-supernova variable star discovered. It is a pulsating variable that changes brightness with an average period of 331 days as the star’s diameter shrinks and grows… there is a startling 6 magnitude change from an easy naked eye magnitude 3 to an invisible magnitude 9 (Round here we can probably see magnitude 5 stars on a good night). It peaked mid-August (with the next expected peak July 2022) so should now be fading but still around magnitude 3. 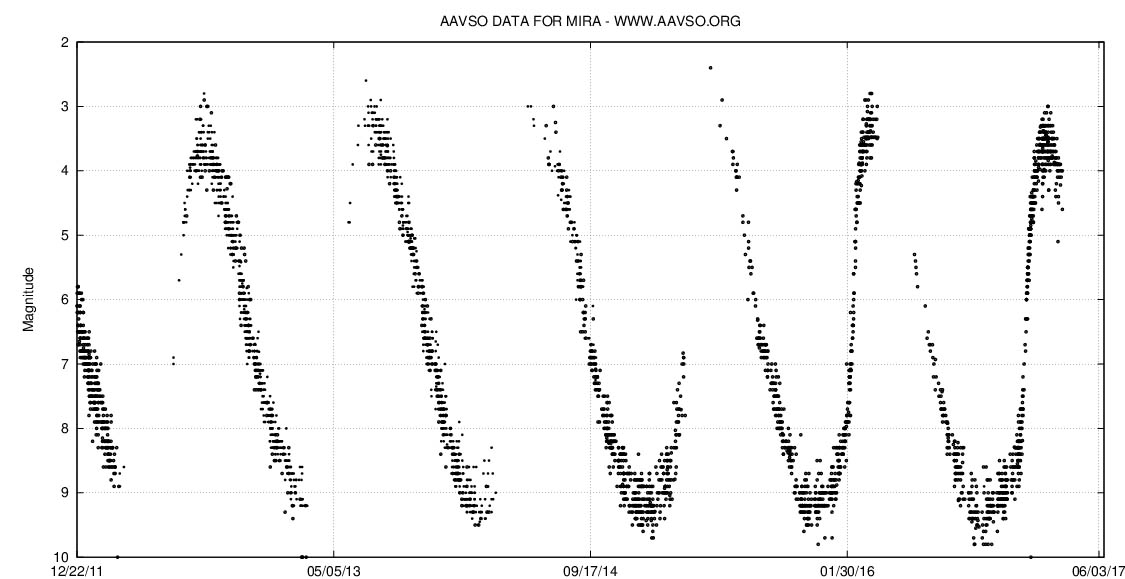 In the east, the winter constellations are starting to appear with Orion just peeking up around 23:00.

The Pleiades, M45, is easily seen and makes a good widefield photo-op. A much more open cluster in Taurus is the vee of the Hyades with Aldebaran at one end. the California Nebula, NGC1499 in Perseus. With a tracked 70mm lens you could capture both NGC1499 and the Pleiades, M45, in one shot.

In Cetus, Kaffaljidhma, η-Ceti, is a rather close but lovely double star [magnitudes 3.6 and 6.2] with a separation of 2.6” and thus requires at least a telescope of 10cm aperture to separate them. The colours are usually described as yellow and blue although this is partly illusionary contrast effect given the known spectral types of the two stars. Actually, the system is a triple star but the faint third star [a magnitude 10 red dwarf at position angle 315°] is 840” [about half the angular diameter of the Moon] away

Scan through Auriga with binoculars and the trio of open clusters, M36, M37 and M38, will appear as faint misty clouds if you have a dark sky. In Perseus, we have another open cluster, M34, and just beneath this and west of Mirfak (a-Per) is Algol, the prototype for a class of eclipsing variable stars. Usually magnitude 2.1, it drops to 3.4 every 2.86 days – (2 days 20 hours 49 min), a rather noticeable change for a few hours. The times for the eclipse minima this month are given in the table. The times for the minimum of Algol can be found here. 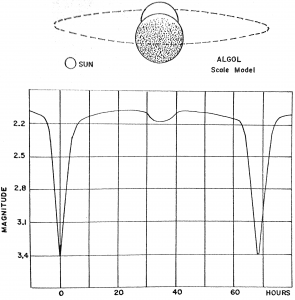 Algol’s light curve with its double minimum. The secondary minimum is quite shallow as the hidden fainter star is much dimmer (mag ~5) than the primary star (mag~2). When the fainter star is in front of the primary, then there is a large dimming. The stars are only 0.062 AU apart.

Looking west, many of the other major objects have already been discussed earlier: M27, M57, M11. We will soon lose the constellation Hercules so now is the time, if you haven’t already, to see the magnificent (magnitude 6) globular clusters of M13 nearly 17’ in diameter and M92, a mere 11’ in diameter. 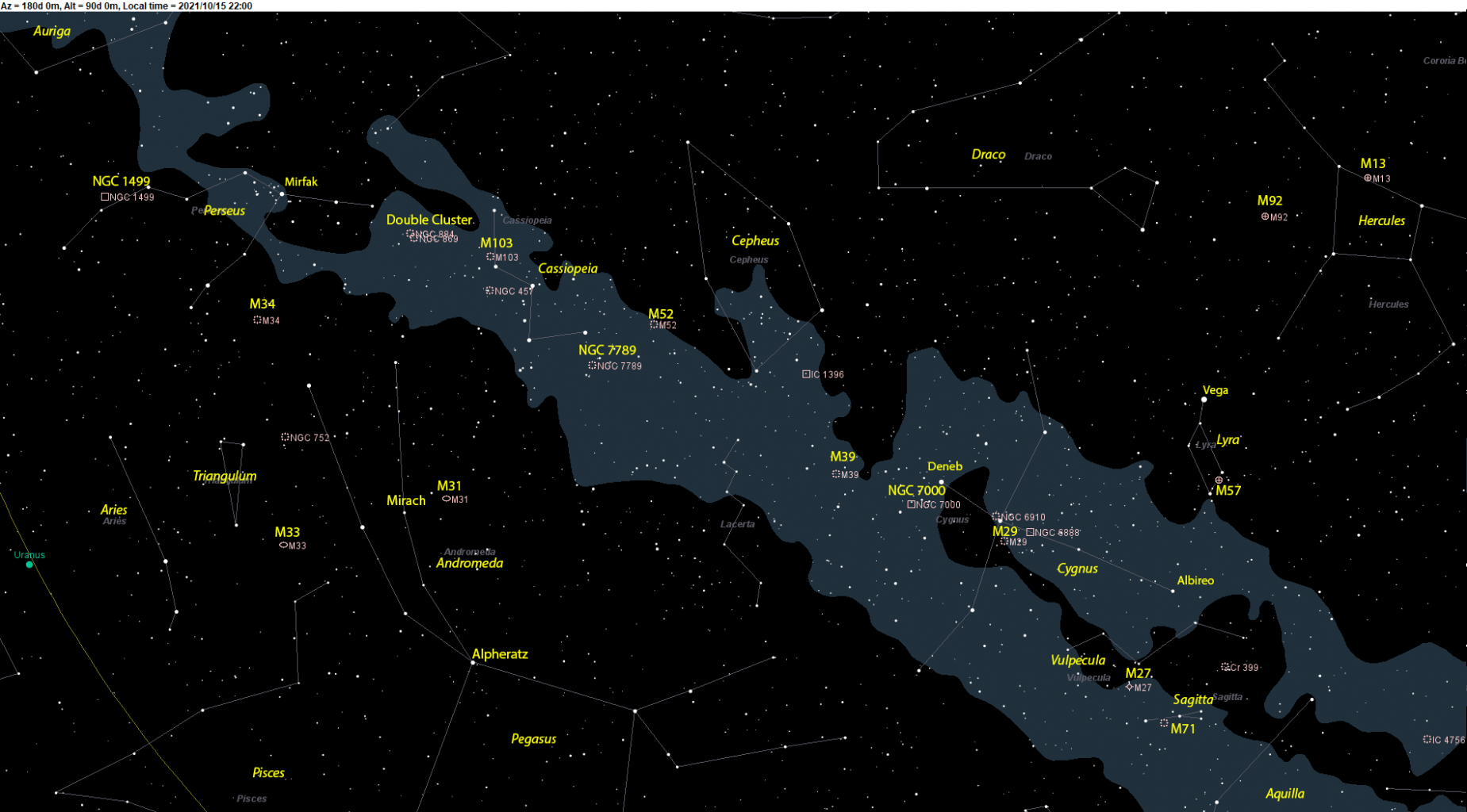 Looking up in October South at the bottom. Click for a larger image. 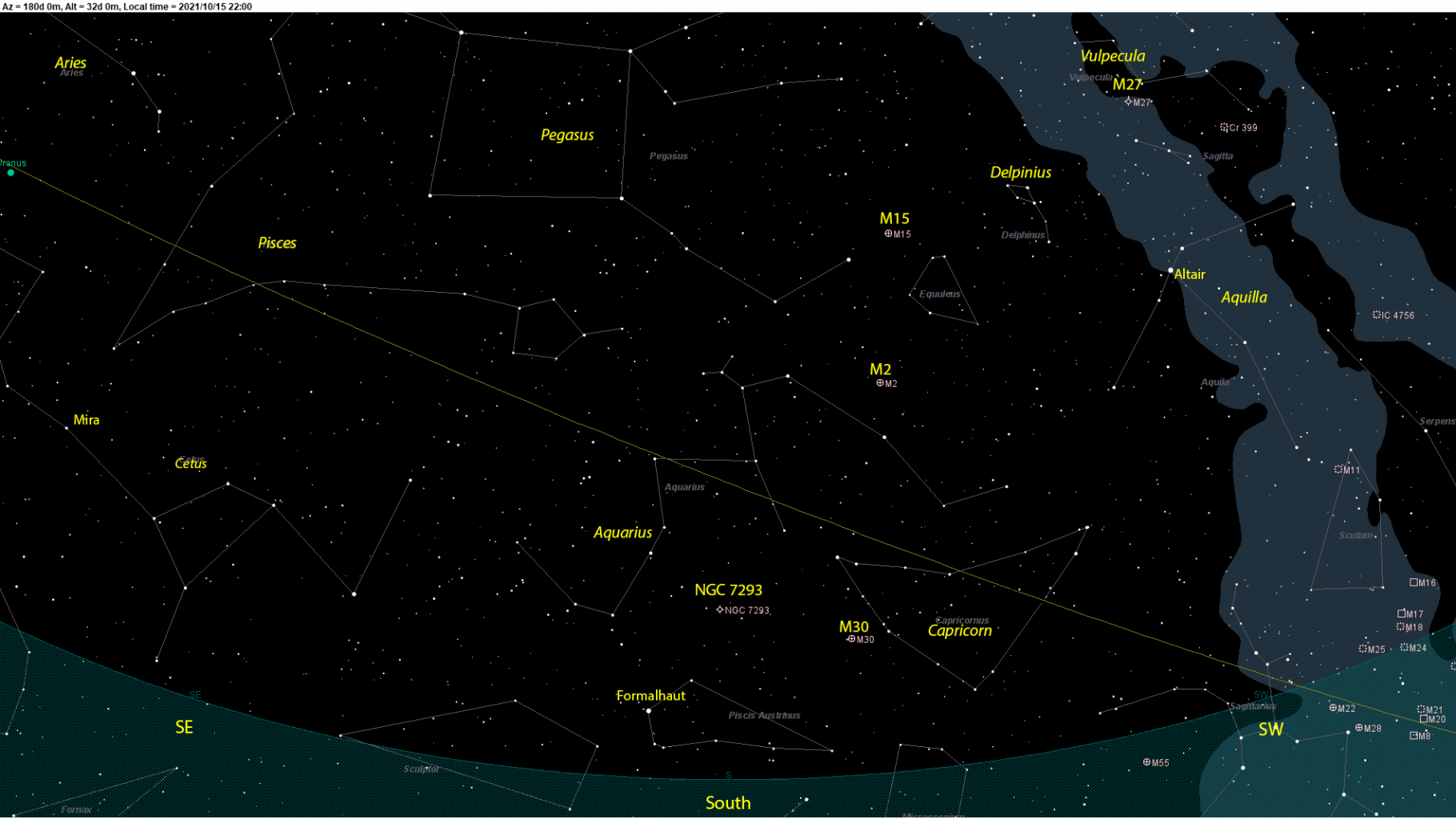 Looking South in October. Click for a larger image. 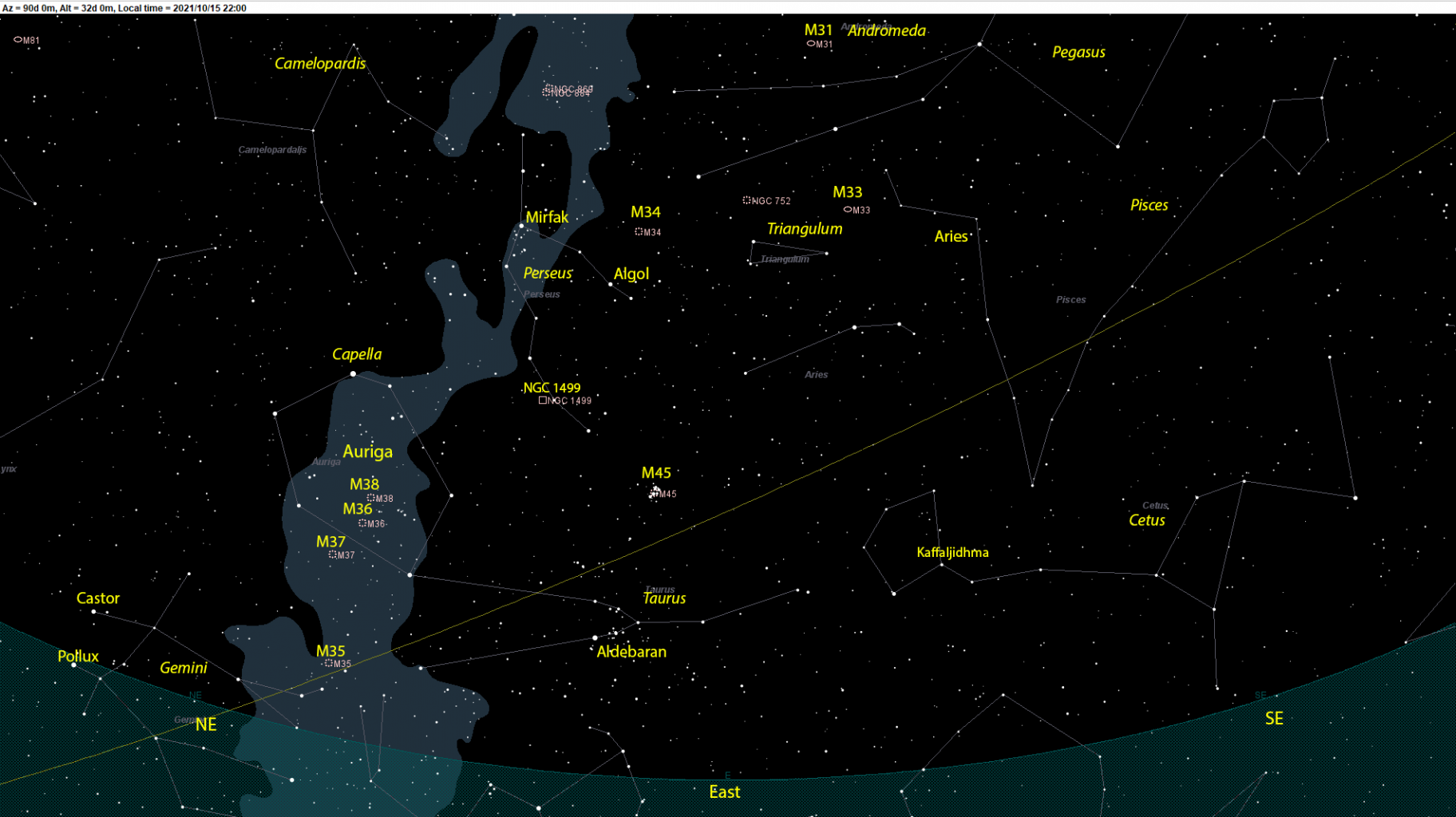 Looking East in October. Click for a larger image. 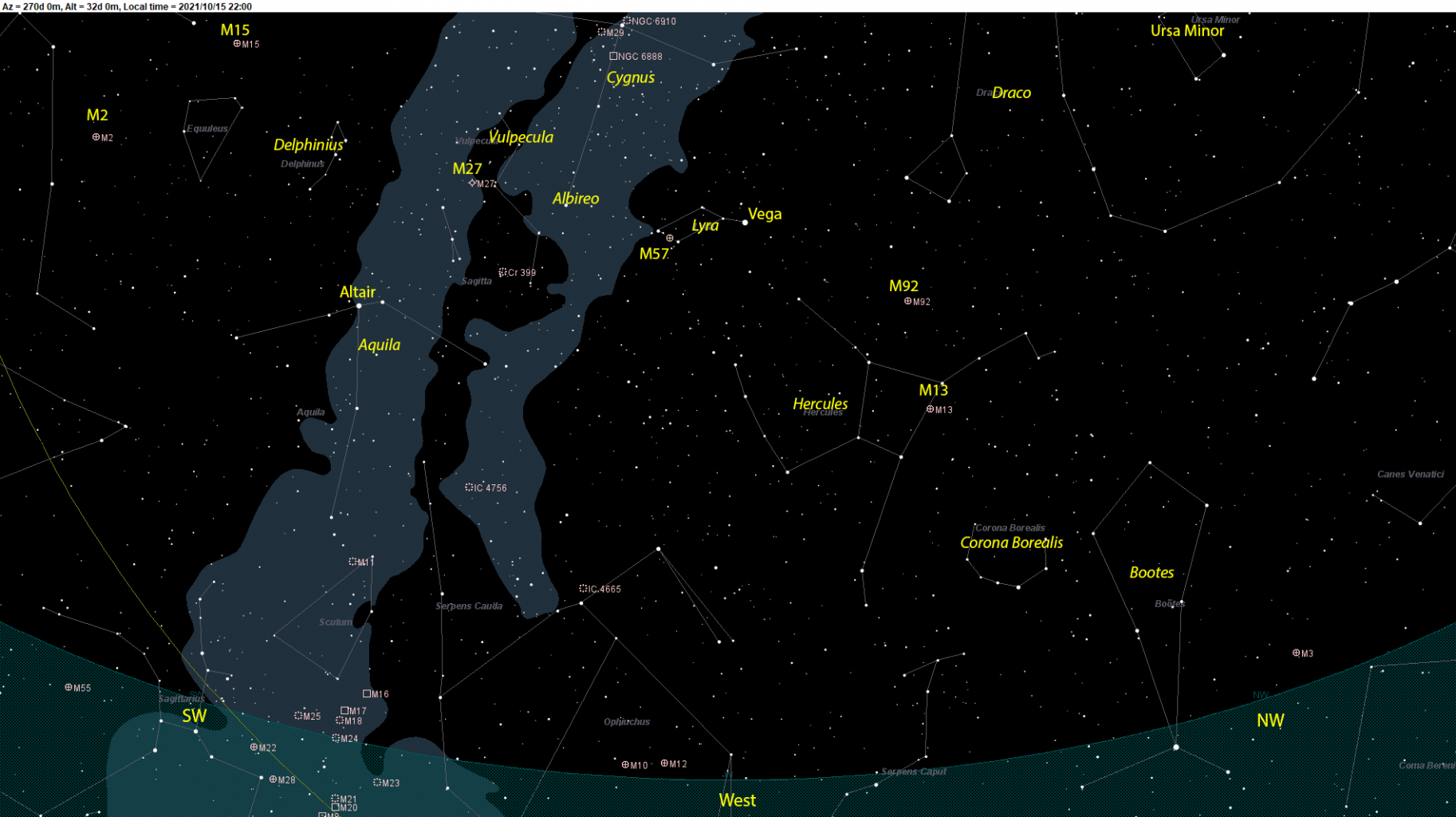 Looking West in October. Click for a larger image. 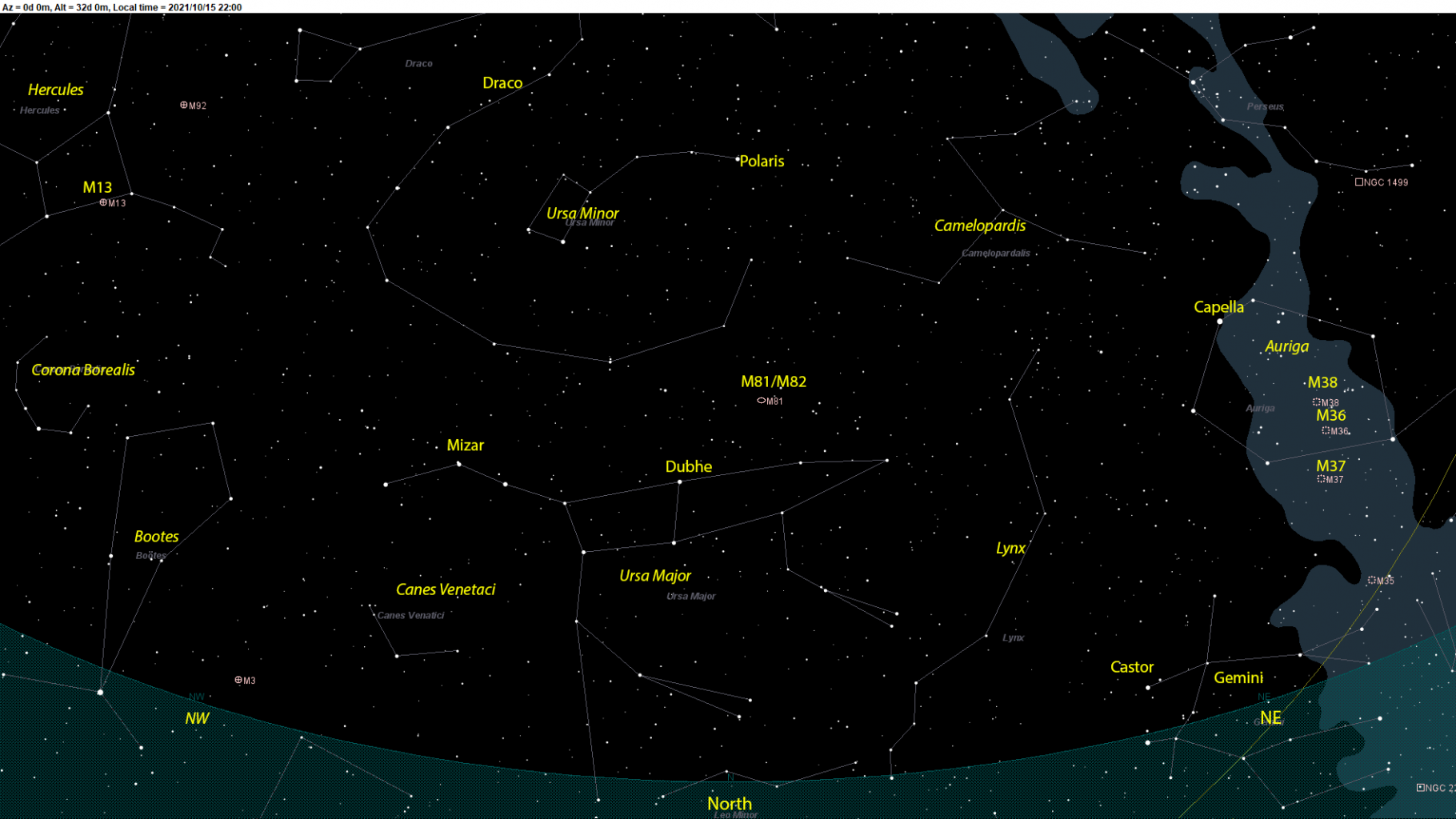 Looking North in October. Click for a larger image.