Perseids meteor shower – peak August 12/13 but active from 7 July to 24 August. Unfortunately, the peak coincides with a full moon, so viewing conditions will be poor. Usually one of the better meteor showers to observe, producing up to 150 meteors per hour at its peak. It is produced by comet Swift-Tuttle. Visible throughout the night but probably best just before dawn on the 13th. The shower tends to have a large number of fast bright meteors, some leaving persistent trails.

The sky is still dominated by the asterism of the Summer Triangle and the Milky Way. These three very bright stars that form the Summer Triangle, Vega, Deneb and (just off the diagram) Altair are good for getting your bearings. Although very prominent on the charts, the Milky Way will be easier to see clearly later in the year with darker skies.

There are lots of Messier objects to see:

Just less than 2° from Vega is The Double-Double, Epsilon (ε) Lyrae, a binary star in binoculars, but with a telescope, each of these two stars is seen to be a double star itself. And don’t forget the rather pretty and colourful double star at the head of Cygnus, Albireo β-Cygni. The primary is a lovely amber-orange at magnitude 3.1 whilst the secondary is a blue-green at magnitude 5.1. The separation is 35” so easily separable in a small telescope.

Looking south, the galactic centre in Sagittarius is visible if you’ve a good southern horizon. Antares is the bright naked eye star just above the horizon.

Meanwhile, looking east, the Milky Way and its luxurious star fields and clusters runs right through Cassiopeia, Cygnus and Aquila. The open cluster M52 in Cassiopeia is a nice binocular object. Lower down are two globular clusters, M15 and M2.

Looking north, the sky is still rather bright in this direction as the Sun isn’t that far below the horizon. The Andromeda Galaxy M31 clearly visible in binoculars. The star clouds of the Milky Way are ‘busy’. The Triangulum Galaxy M33 is still rather low early in the evening. 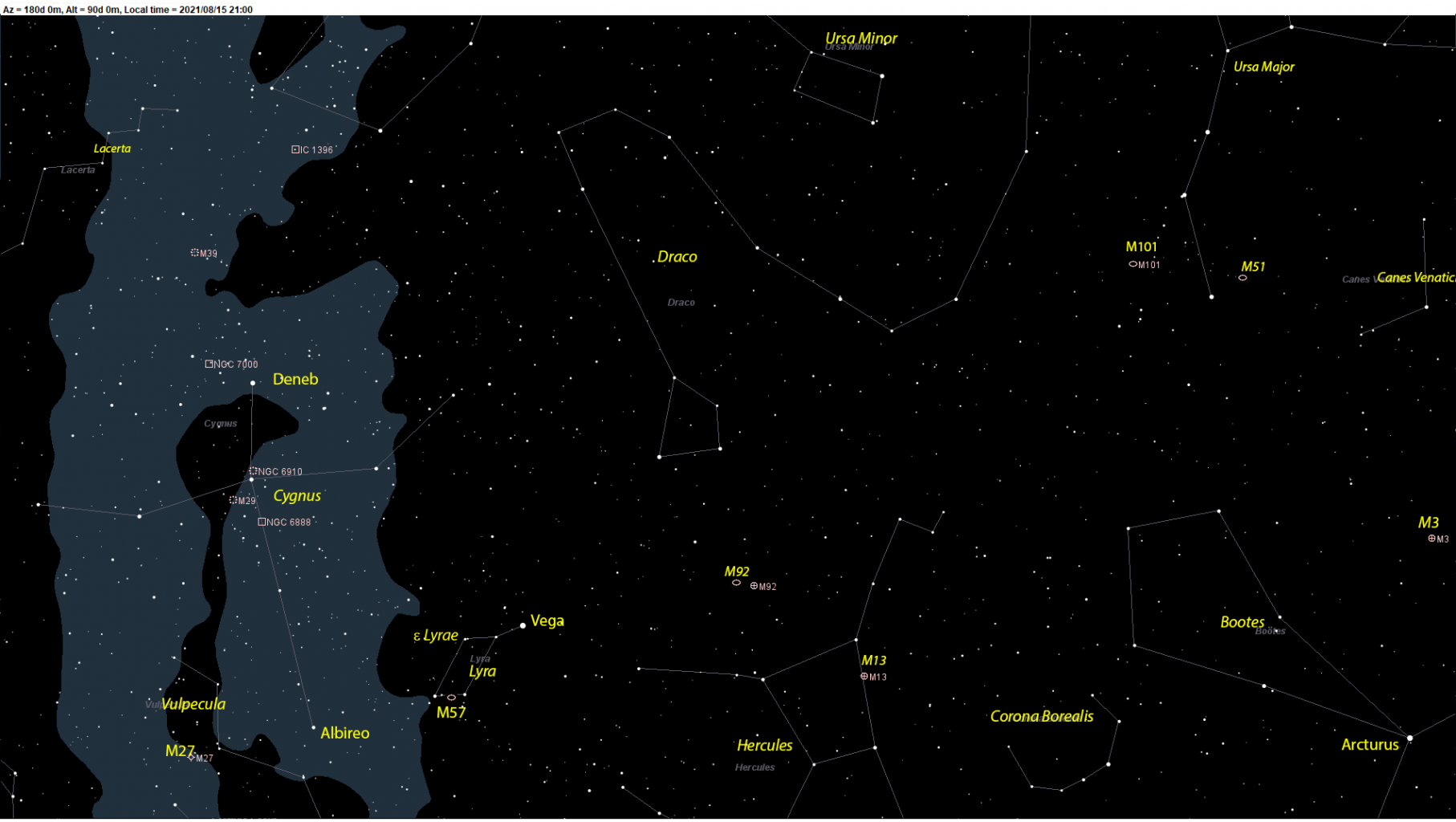 Looking up in August South at the bottom. Click for a larger image. 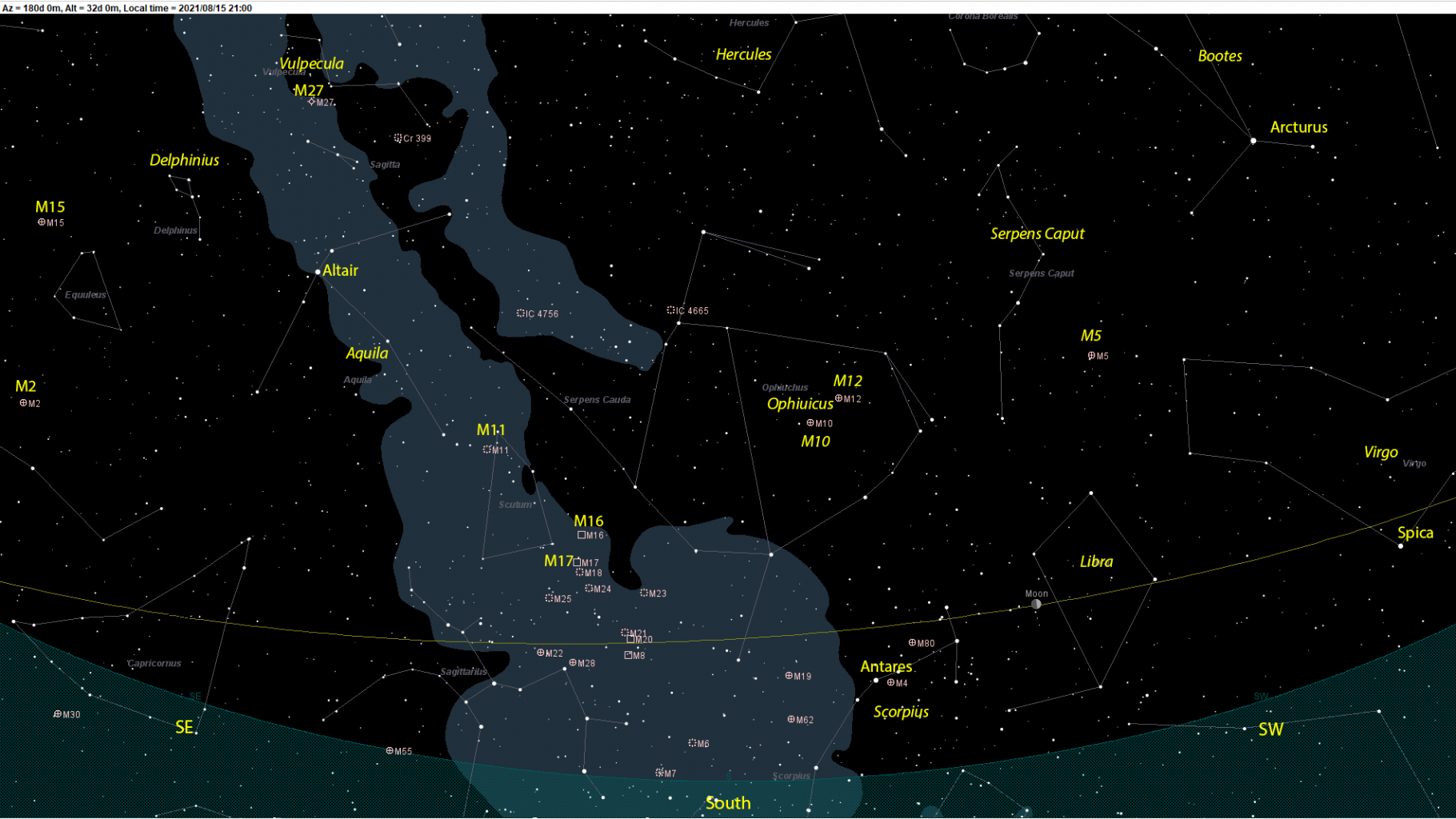 Looking South in August. Click for a larger image. 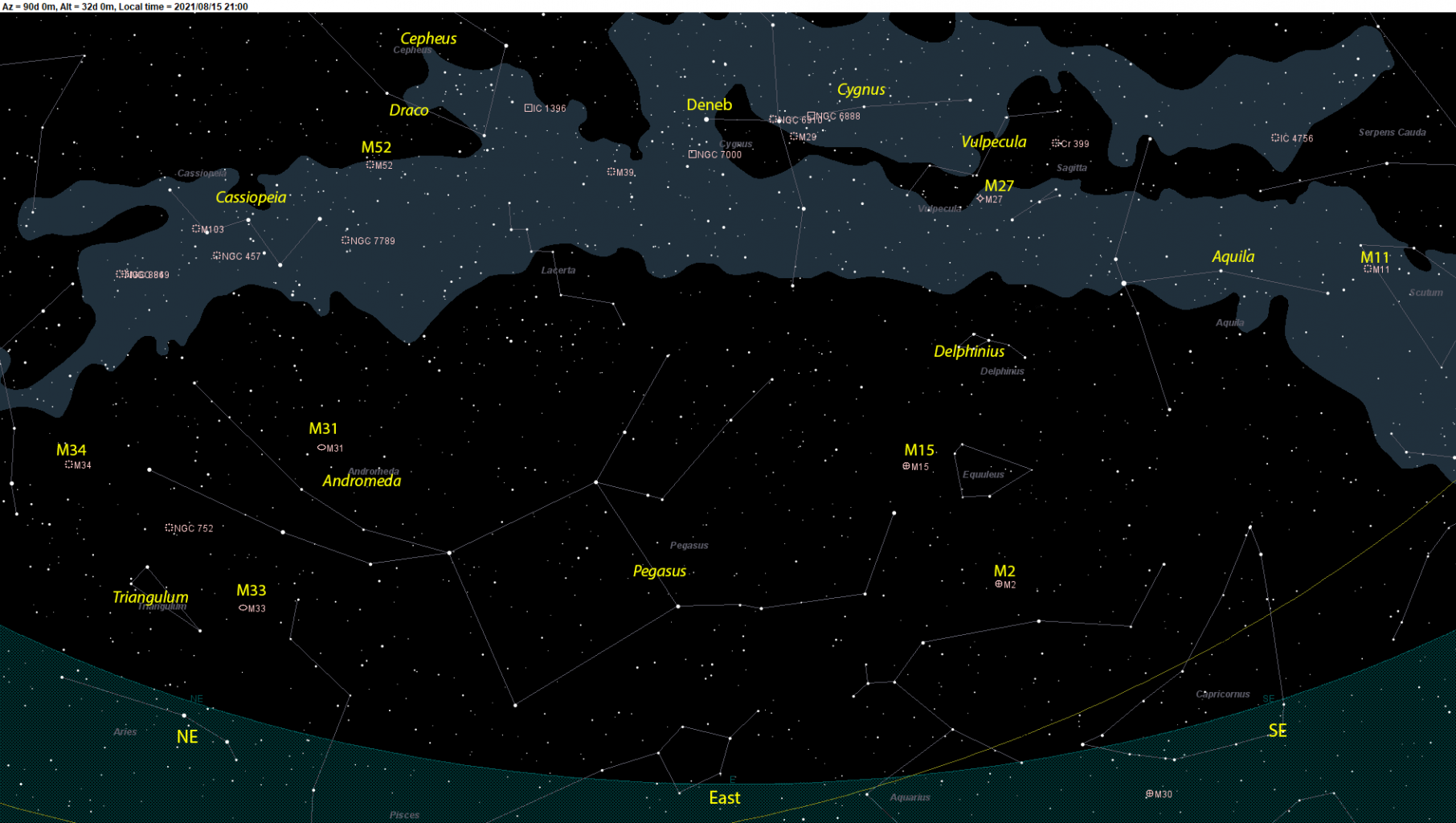 Looking East in August. Click for a larger image. 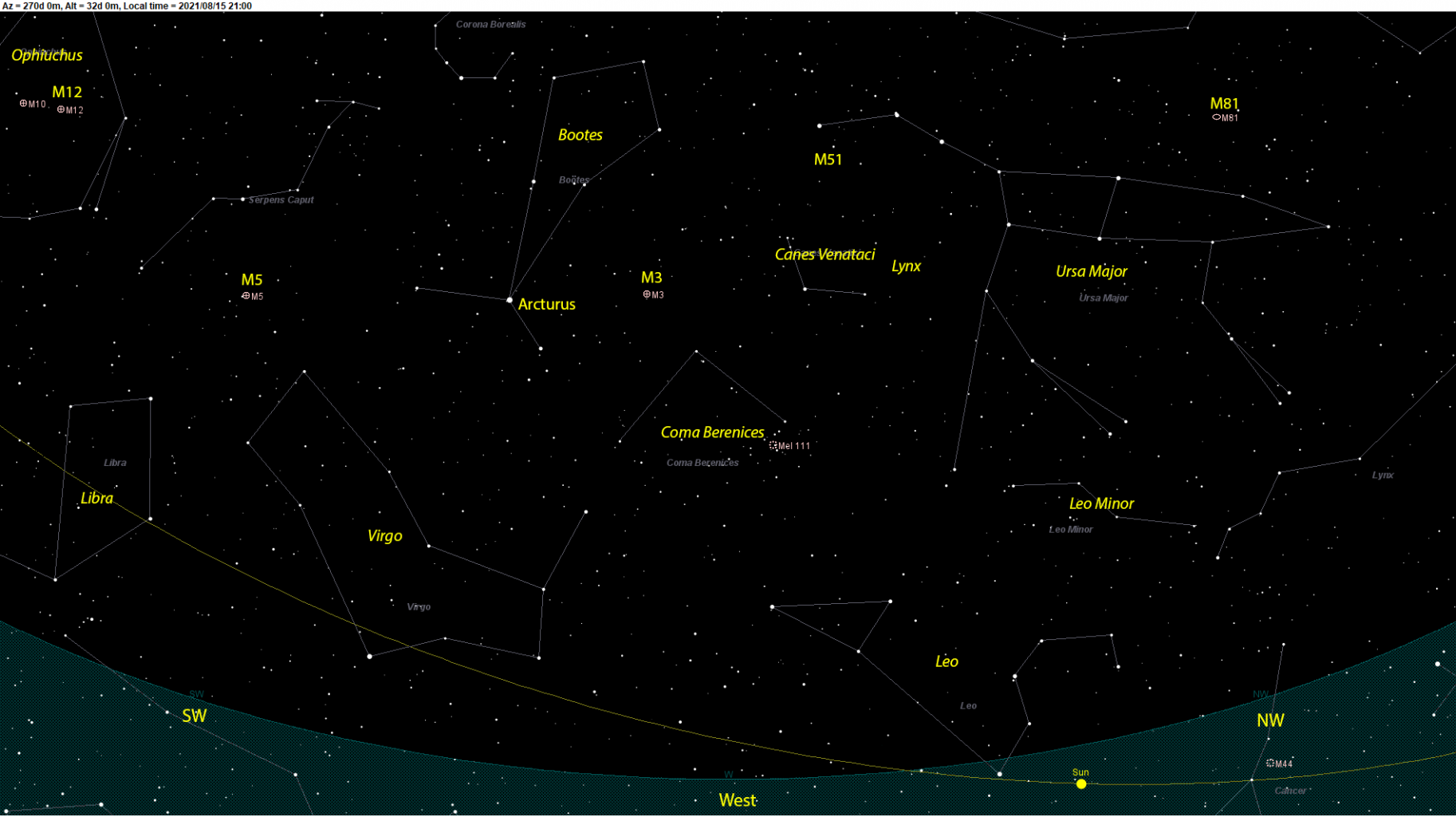 Looking West in August. Click for a larger image. 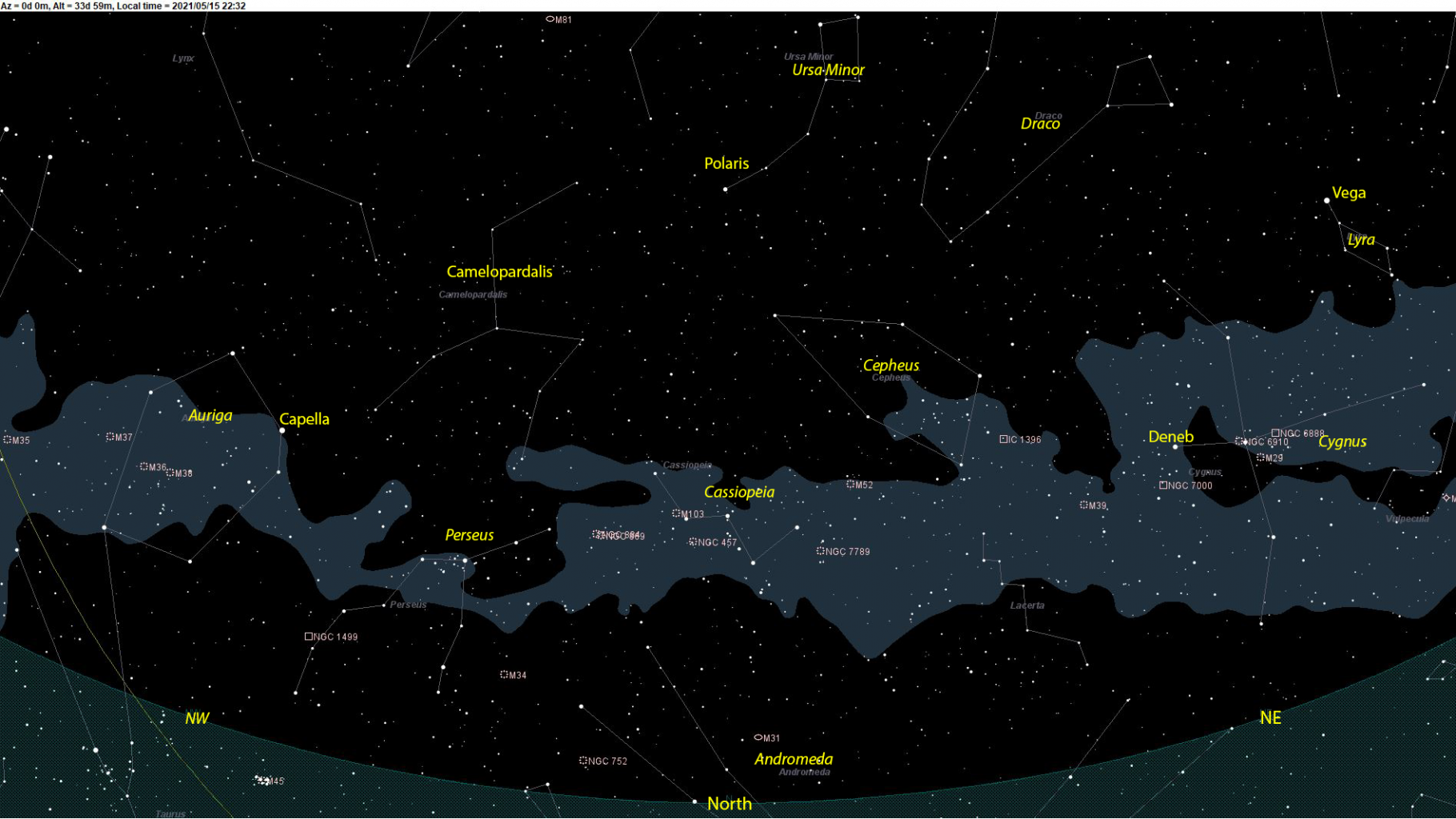 Looking North in August. Click for a larger image.