Astronomical dark does not occur after the 2nd week of May until the first week of August in Kendal.

The view is dominated by the asterism of the Summer Triangle and the Milky Way. Although very prominent on the charts, the Milky Way will be easier to see clearly later in the year with darker skies. The three stars of the Summer Triangle are good for getting your bearings. The brightest Vega, unmissable as it is the brightest star in the sky at magnitude 0.03. To the east is fainter Deneb, magnitude 1.25, at the tail of the swan, Cygnus. To the south is Altair, magnitude 0.76, flanked by two brightish stars around magnitude 3 making it too unmistakable. There are a lot of Messier objects to see although the not dark skies make photography of these tricky. One of the telescopic highlights is the planetary nebula M57, the Ring Nebula, in Lyra which appears as a fuzzy green donut. Just less than 2° from Vega is the multiple double star system of the Epsilon (ε) Lyrae. With binoculars a binary star is seen within the same field of view as Vega, but with a telescope, each of these two stars is seen to be a double star itself – hence the common name of the Double Double. Of course, the Great Andromeda Galaxy is now rising in the NE and by mid-August will be a great wide-angle photographic target if you’ve a tracker. There are plenty of globular clusters and other galaxies to see, as discussed in the last newsletter.

To the south, if you’ve a good southern horizon, the galactic centre in Sagittarius is now visible with the Teapot asterism just visible for us at 54°N – in the star chart it is the ‘loop’ of stars below the label Sagittarius. There are the two globular clusters M10 and M12 plus the Eagle Nebula, M16, ‘home’ to the famous HST photograph The Pillars of Creation. There is a nice open cluster higher ‘up’ the Milky Way, M11. And one of my favourites, the planetary nebula M27, the Dumbbell Nebula, in Vulpecula.

In the east, the Milky Way and its luxurious star fields and clusters runs right through Cassiopeia, Cygnus and Aquilla. The open cluster M52 in Cassiopeia is a nice binocular object. Lower down are two globular clusters, M15 and M2.

The west is generally quite bright as the Sun is not that far below the horizon at the map times. 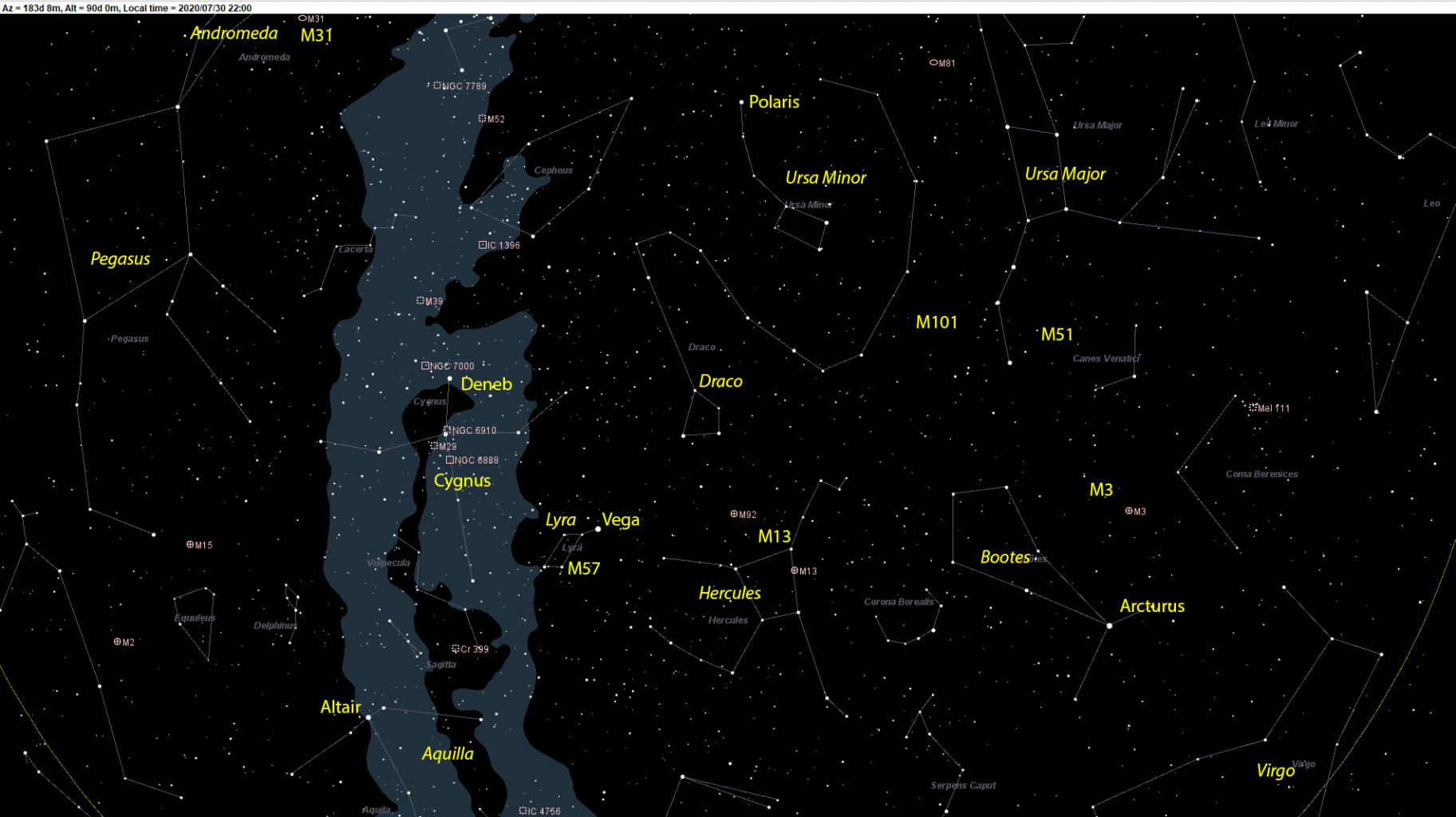 Looking up in July South at the bottom. Click for a larger image. 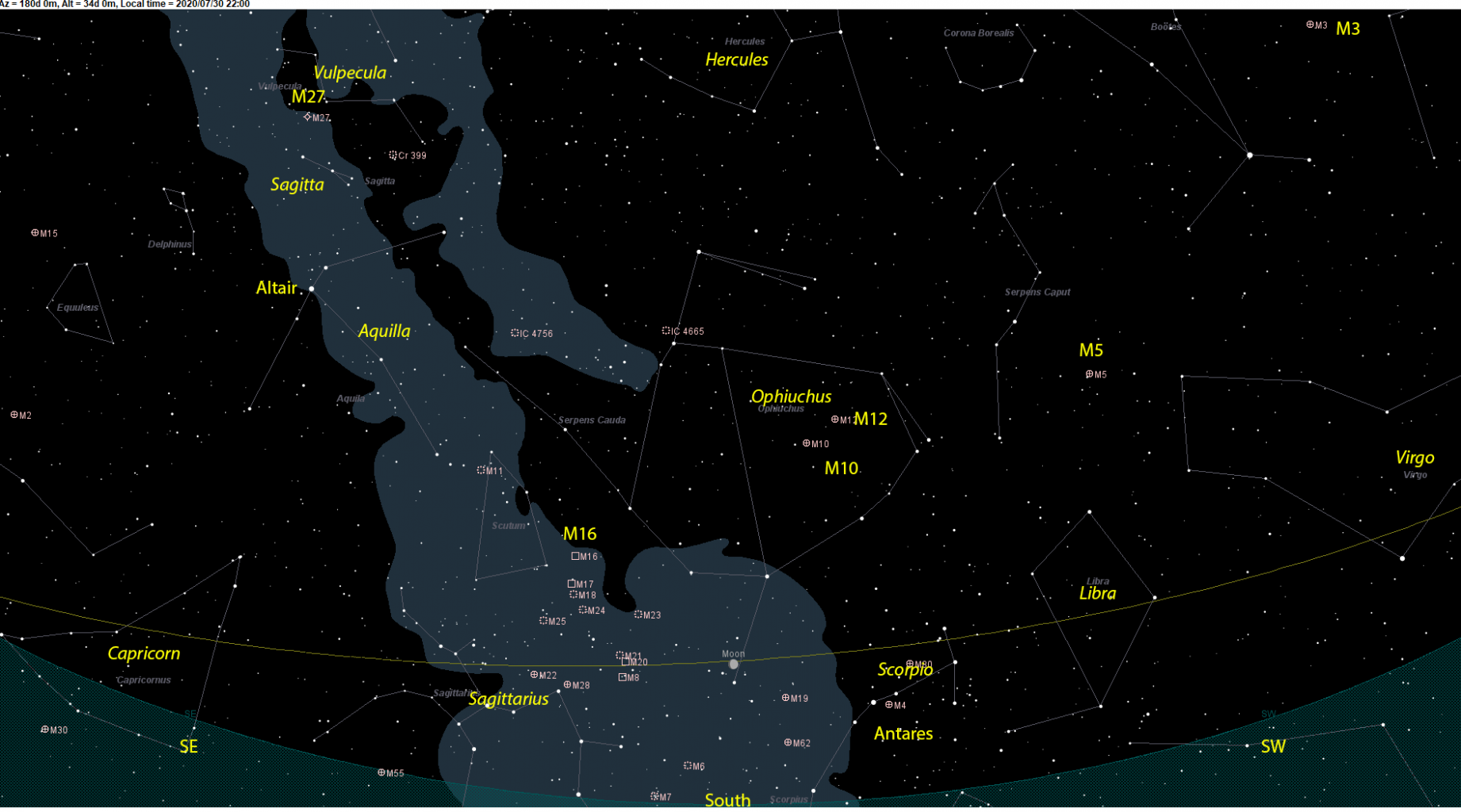 Looking South in July. Click for a larger image. 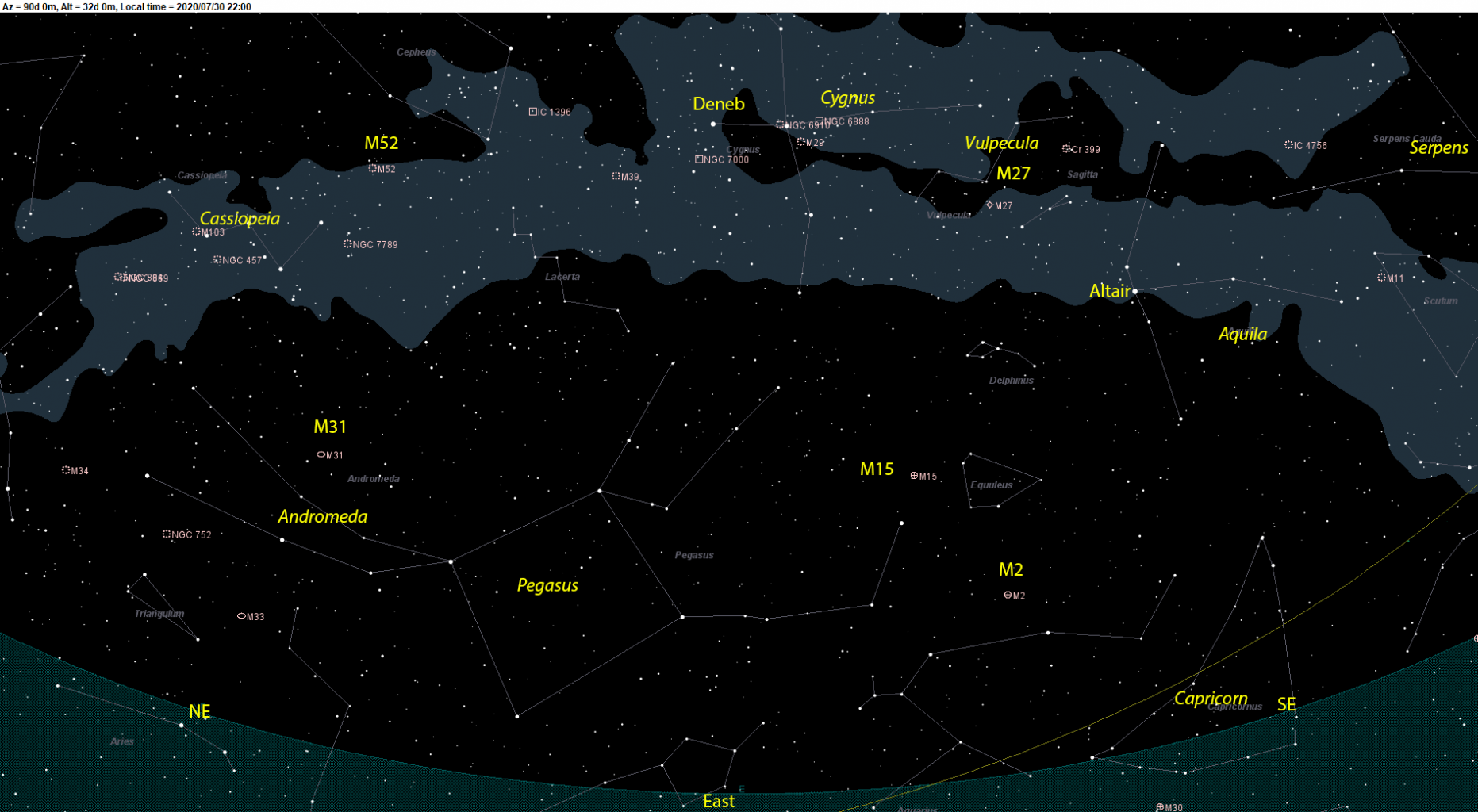 Looking East in July. Click for a larger image. 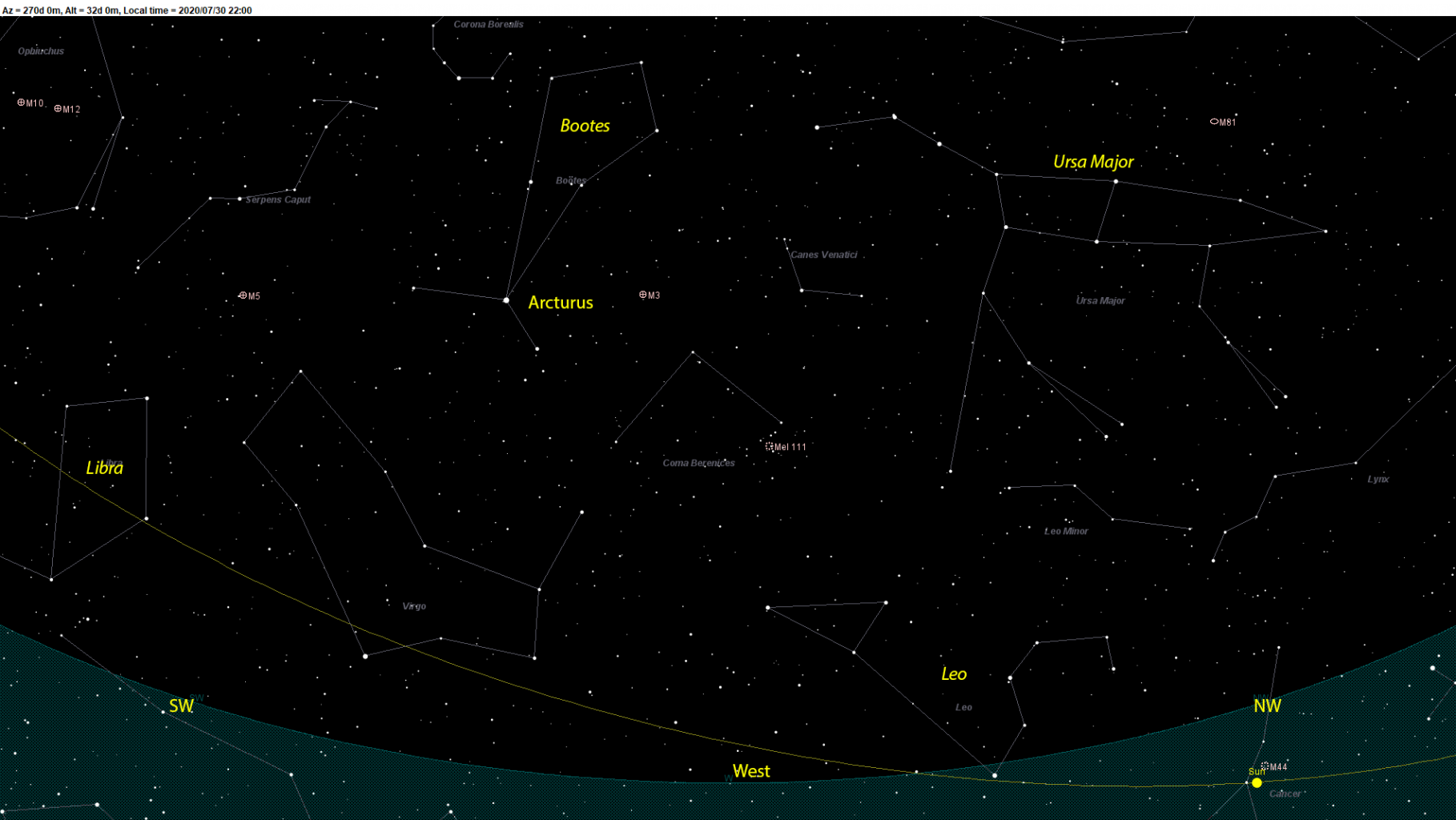 Looking West in July. Click for a larger image. 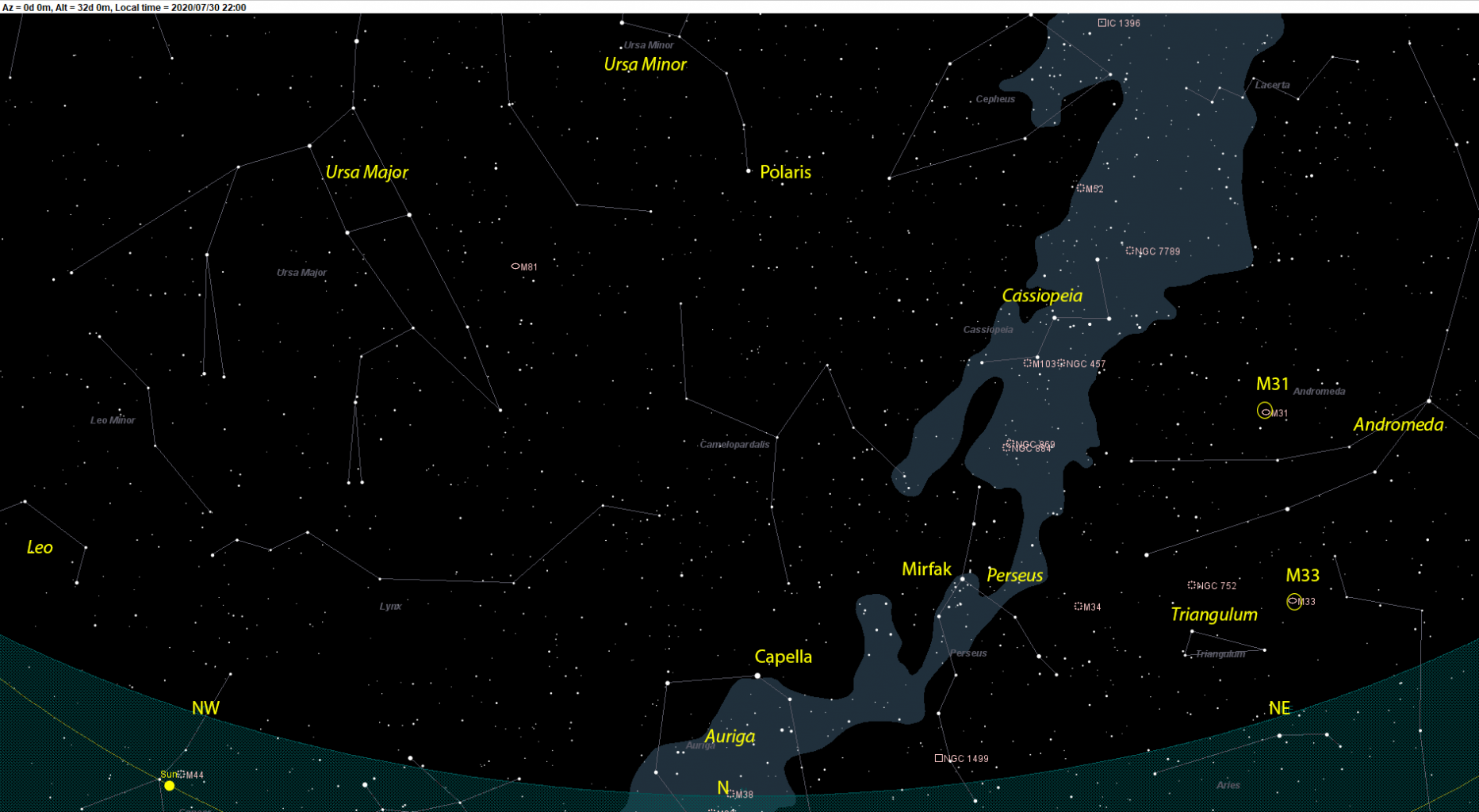 Looking North in July. Click for a larger image.