Dominant is Ursa Major, The Great Bear, with its fine collection of objects. Many of these are quite easy even with binoculars. The stars of the prominent asterism of the Plough, also known as The Saucepan, The Big Dipper [primarily in America] or King Charles’s Wain, aren’t actually that bright with none being as bright as first magnitude. Lambda λ and Mu μ, forming one of the rear legs of the Bear, are 1¾ degrees apart and make a fine binocular pairing [or very low power telescopic object] as they are of distinctly different colours; λ is white (spectral type A2) whilst μ is very red (M0). Mizar (magnitude 2.1), in the tail, is an easy naked eye double with Alcor (4.0), separation12’ of arc. Between the two, forming a nice triangle, lies in the eighth magnitude star named Sidus Ludovicianum just visible in x8 binoculars. Mizar is itself double but requires a telescope to separate the two stars.

Using a 4” telescope at x48, a whole host of galaxies are visible: there are two the fine galaxies M81 and M82, M106, 107, 108 and 109. Close to M108 is the slightly brighter Owl Nebula, M97, with its two ‘eyes’. In nearby Canes Venatici, there are another two magnitude 8 spiral galaxies; The Sunflower Galaxy M63 and M94 in addition to the splendid Whirlpool Galaxy M51 at the end of the tail of the Great Bear.

Further west, the Milky Way is still visible with lots of star clusters around Auriga and Perseus: M36, M37 and M38 in Auriga are nice binocular objects. A couple of faint and tantalising binocular clusters I like are near Mirfak in Perseus; follow the line of bright stars through Mirfak away from the Double Cluster, itself a splendid binocular object, and after two stars, bear off into the curving line of stars to the east (left). See if you can spot the faint clusters which appear as compact misty patches just near the last star in the line.

In the south, Orion is prominent in this general direction but setting by midnight mid-month. Past it best but enjoy it whilst you can.

The most obvious telescopic and binocular target is still the Great Orion Nebula, M42, always a joy to look at. The Crab Nebula, M1, roughly midway between Capella and Betelgeuse, is still reasonably well-placed. In nearby Monocerous, NGC2244, the small quadrilateral at the heart of the Rosette nebula is quite good in binoculars and long exposure photographs will pick up the surrounding rosette shaped nebula.

M48 in Monocerous is a well-dispersed open cluster.

To the east we have Leo with many galaxies: M65 & M66 are just binocular objects with the third component NGC3628 of the Leo Triplet requiring a telescope. Beneath the belly of the lion are three galaxies; M95, M96 & M105

In addition to Leo, described earlier, just off the lion’s tail lies the constellation Coma Berenices, Berenice’s hair. The three main stars are only about magnitude 4 but the area is rich in stars and well worth sweeping with binoculars. The globular cluster M53 lies just east of the most southern and brightest of this trio of stars, Cor Caroli. Just north is M64, The Black-Eye Galaxy and just within binocular range.

Slightly west straddling the border with Virgo, lies the extensive Virgo Cluster of galaxies. There are too many galaxies to mention here but M86, M87 and M84 are notable. These will be better placed next month at a reasonable time of the evening. M84 and M86 are part of Markarian’s Chain, a smoothly curved line of galaxies in the Virgo Cluster. 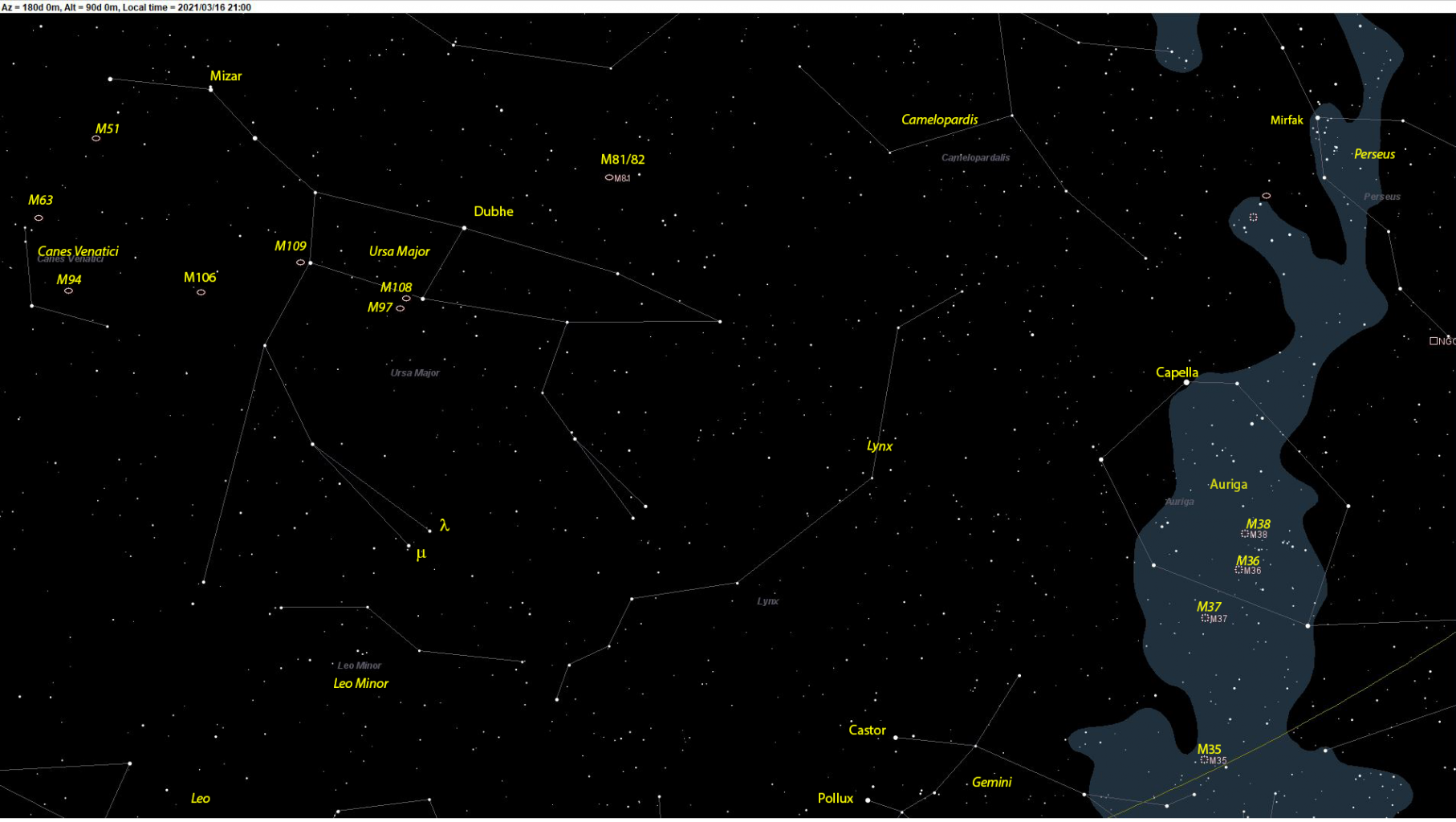 Looking up in March. South at the bottom. Click for a larger image. 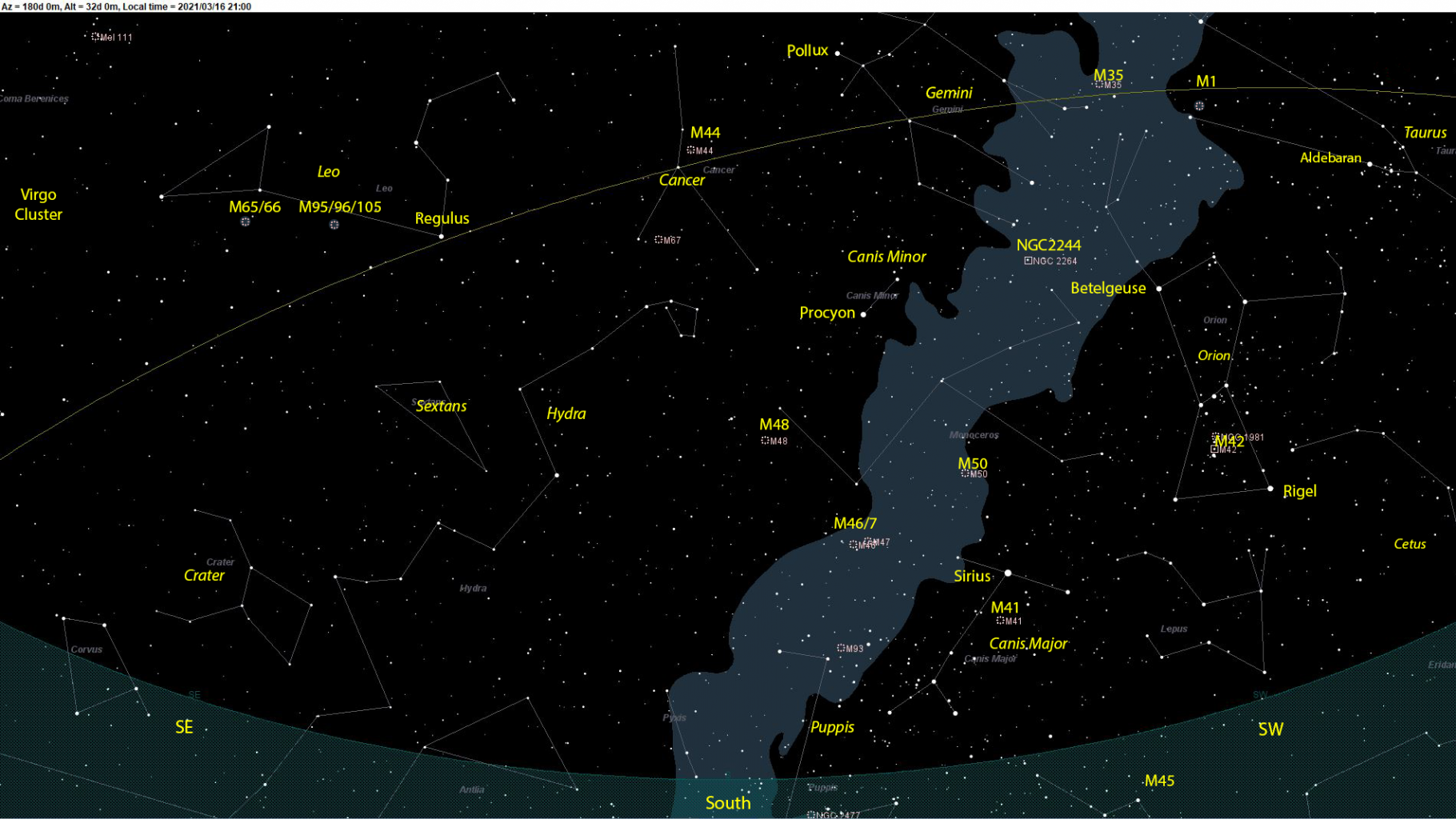 Looking South in March. Click for a larger image. 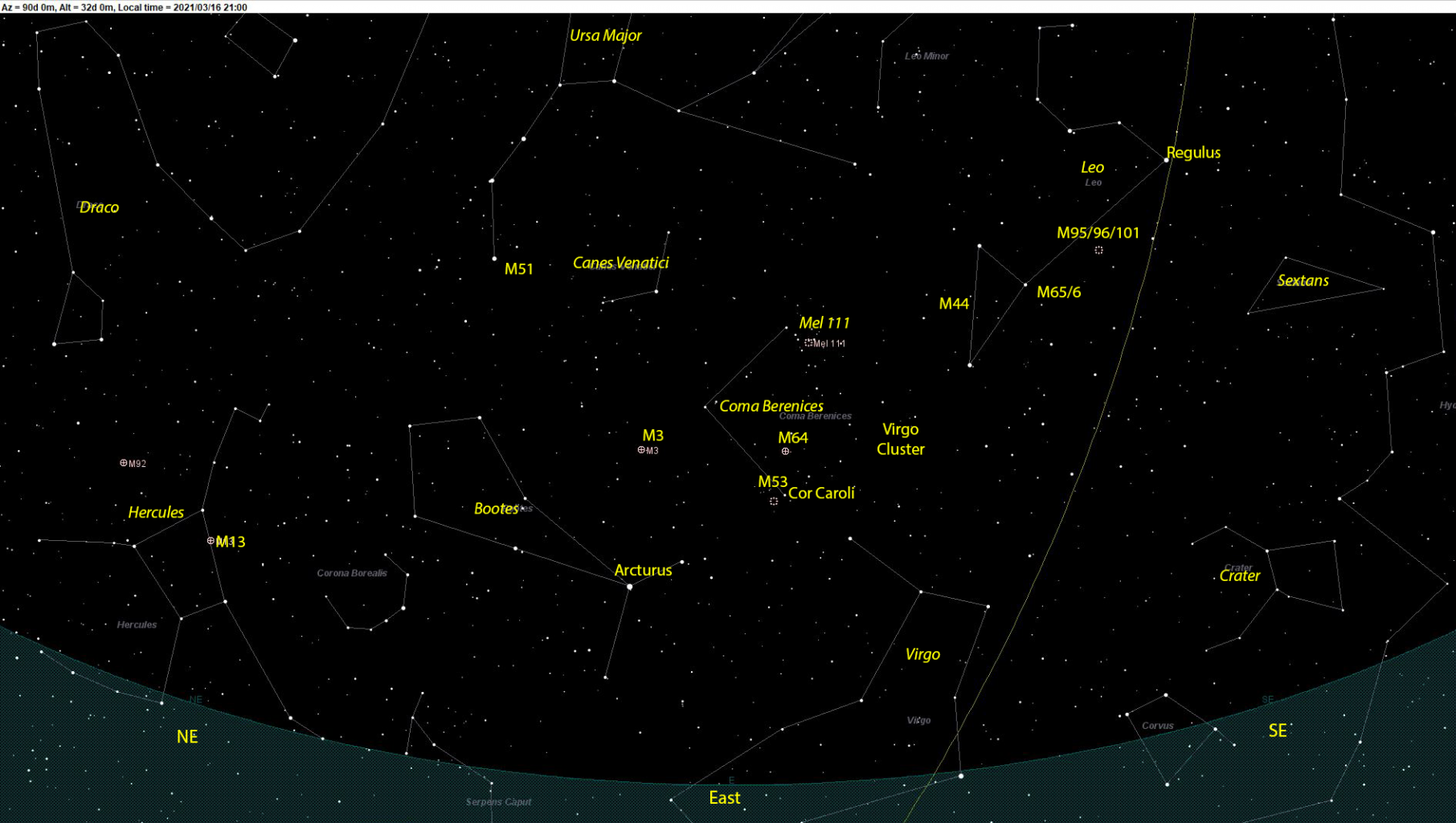 Looking East in March. Click for a larger image. 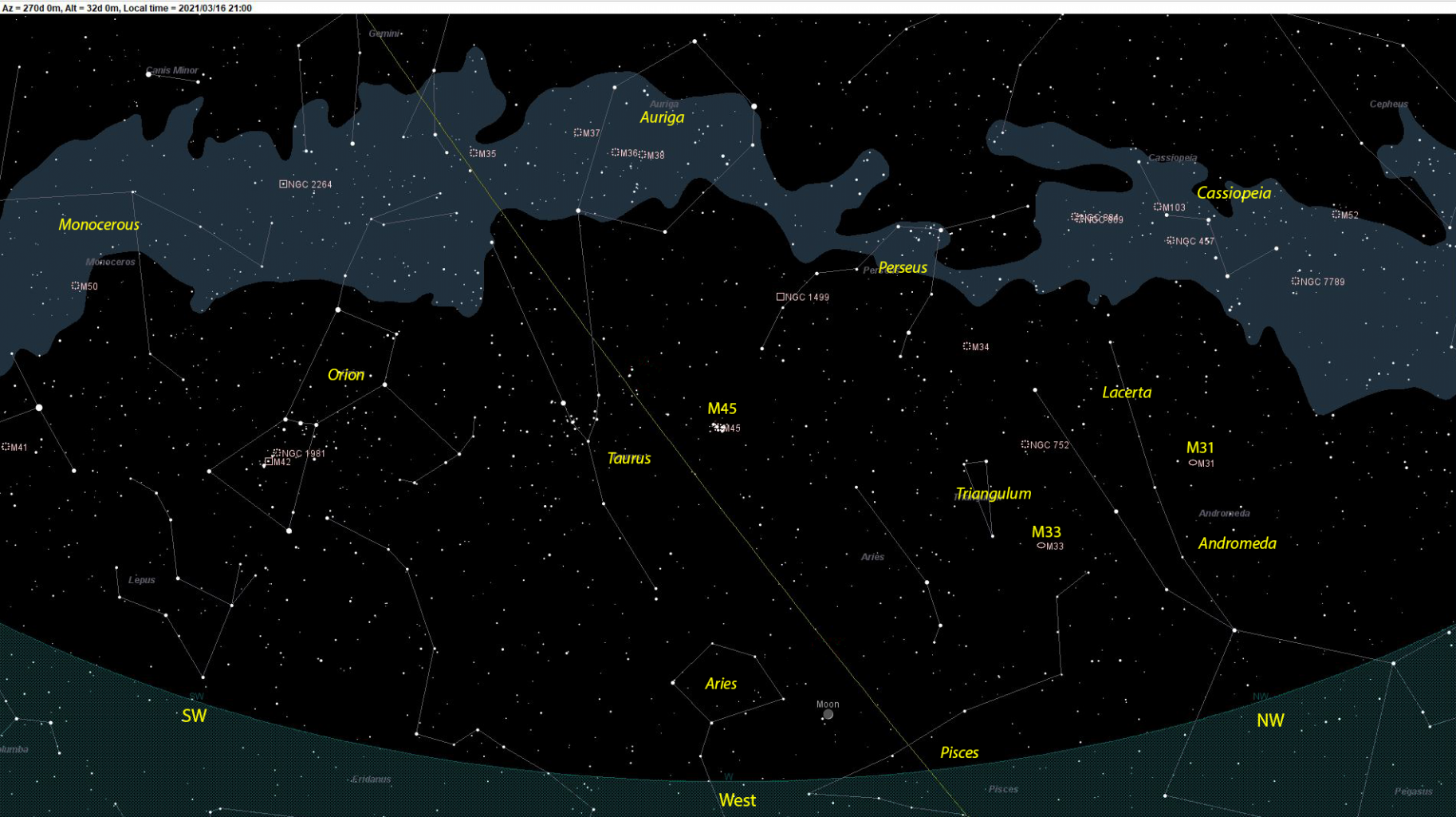 Looking West in March. Click for a larger image. 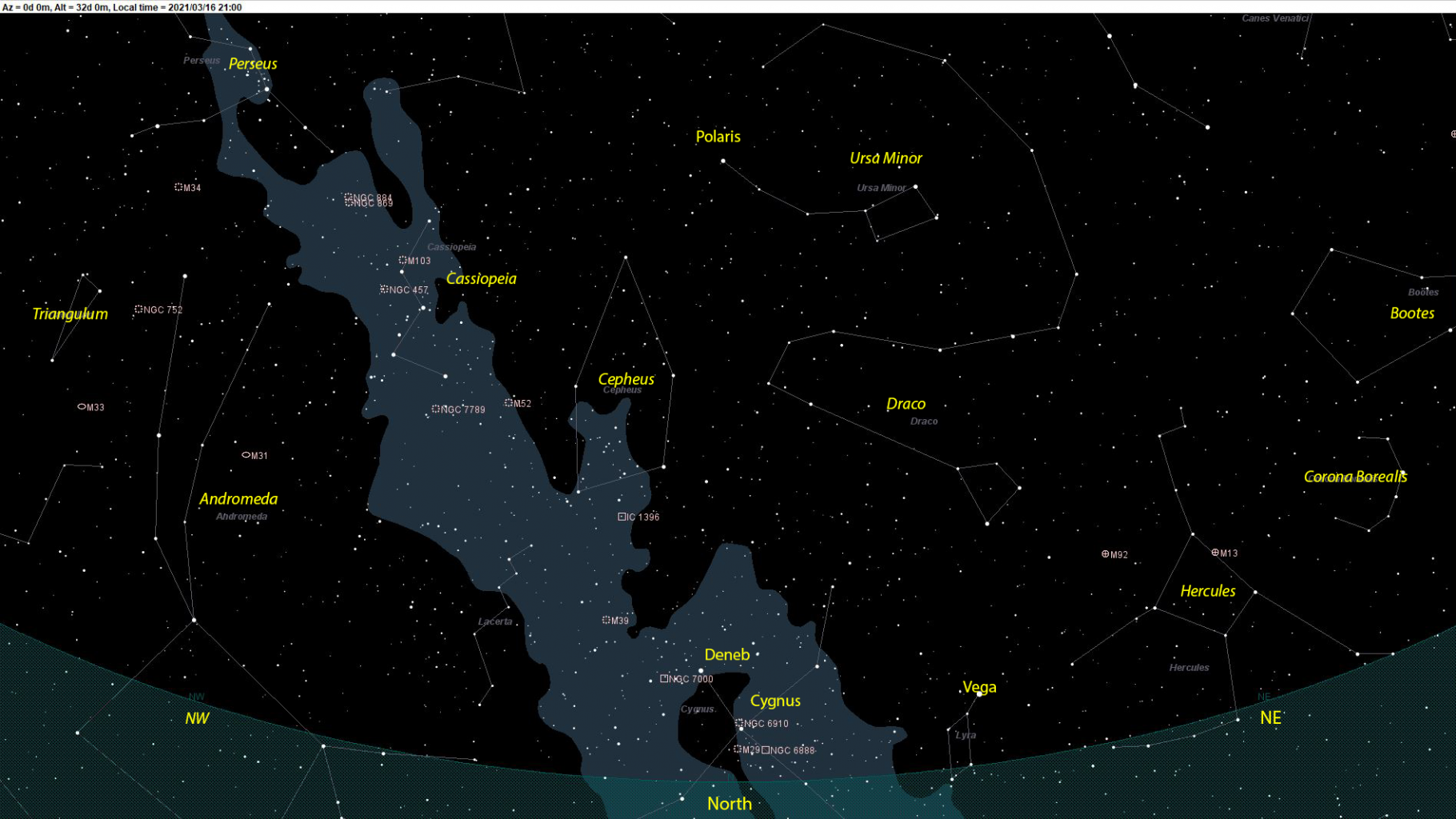 Looking North in March. Click for a larger image.