April is the ideal time for imaging or detecting the faint fuzzies in Ursa Major, The Great Bear, as the constellation is almost directly overhead. As mentioned last month, Lambda l and Mu m, forming one of the rear legs of the Bear, are 1¾ degrees apart and make a fine binocular pairing [or very low power telescopic object] as they are of distinctly different colours; l is white (spectral type A2) whilst m is very red (M0). Mizar (magnitude 2.1), in the tail, is an easy naked eye double with Alcor (4.0), separation 12’ of arc. Between the two, forming a nice triangle, lies is the eighth magnitude star named Sidus Ludovicianum just visible in x8 binoculars. Mizar is itself double but requires a telescope to separate the two stars.

In nearby Canes Venatici , there are another two magnitude 8 spiral galaxies; The Sunflower Galaxy M63 and M94 in addition to the splendid Whirlpool Galaxy M51 at the end of the tail of the Great Bear. Further west, the Milky Way is still visible with lots of star clusters around Auriga and Perseus : M36 , M37 and M38 in Auriga are nice binocular objects. Just a bit lower, but in Gemini, is the spectacular binocular open cluster M35 which is quite easy to find as it is just above m and h (Propus).

I had a quick look to see if anything of interest in either Lynx or Leo Minor… Patrick Moore was quite scathing about them:

Lynx – “ A very obscure constellation, … [and apart from a red star] contains nothing else of any note.

” Leo Minor – “ A small constellation with dubious claims to be a separate identity .”

Says it all, I think!

The south is dominated by the constellation of Leo. There is a cluster of galaxies (Leo Triplet of galaxies M65 , M66 and NGC3628 ) visible in small telescopes below the tail of Leo. Beneath the belly of the lion are three galaxies; M95 , M96 & M105.

In addition, in Canes Venatici there is M3 , a stunning globular cluster which is nice in binoculars.

In Cancer is the spectacular naked eye M44 , Praesepe or the Beehive Cluster, which makes a fine binocular or low power telescope object. Nearby lies M67 is nice in binoculars although it is sometimes said to be naked eye visible. I’m doubtful of that with our skies. The preponderance of reddish stars might make a nice photograph. There are two other open clusters, M48 and M67.

As mentioned in last month’s notes, the three stars forming Coma Berenices are in an area rich in stars and worth sweeping with binoculars. The globular cluster M53 lies just east of the most southern and brightest of this trio of stars, Cor Caroli . Just north is M64 , The Black-Eye Galaxy and just within binocular range.

Virgo is not a very exciting constellation. Its brightest star, Spica , is a blue giant star 2000 times as luminous as the Sun. It is actually a very close binary but too close for amateur telescopes to separate. Slightly west straddling the border with Virgo, lies the extensive Virgo Cluster of galaxies. There are too many galaxies to mention here but M86 , M87 and M84 are notable. These will be better placed next month at a reasonable time of the evening. M84 and M86 are part of Markarian’s Chain , a smoothly curved line of galaxies in the Virgo Cluster.

The minor constellations of Corvus and Crater have little to recommend them.

In the east, Hercules is becoming prominent with the large globular of M13 being an easy binocular object and lovely photographic target. In Virgo, there are loads of galaxies, the Virgo Cluster, as previously mentioned. A second globular cluster M92 is almost as good as M13.

For something different, have a look at Draco , The Dragon. Usually the brightest star in any constellation is labelled a, but in Draco Thuban a-Draconis is only magnitude 3.6. Thuban used to be the Pole Star 4800 years ago but not now due to the precession of the Earth’s axis. In order of decreasing brightness, the stars of the dragon’s head are g(2.2), b(2.2), x(3.7), and a wide double n(each 4.9) separation 1’. Easy to separate with binoculars, but can you do so with the naked eye? It’s possible. g is a lovely orange K-type star.

In Bootes , Arcturus is a lovely light orange and e similarly. Very close to e and on the same binocular field of view is W-Bootis , another orange-red hued star. 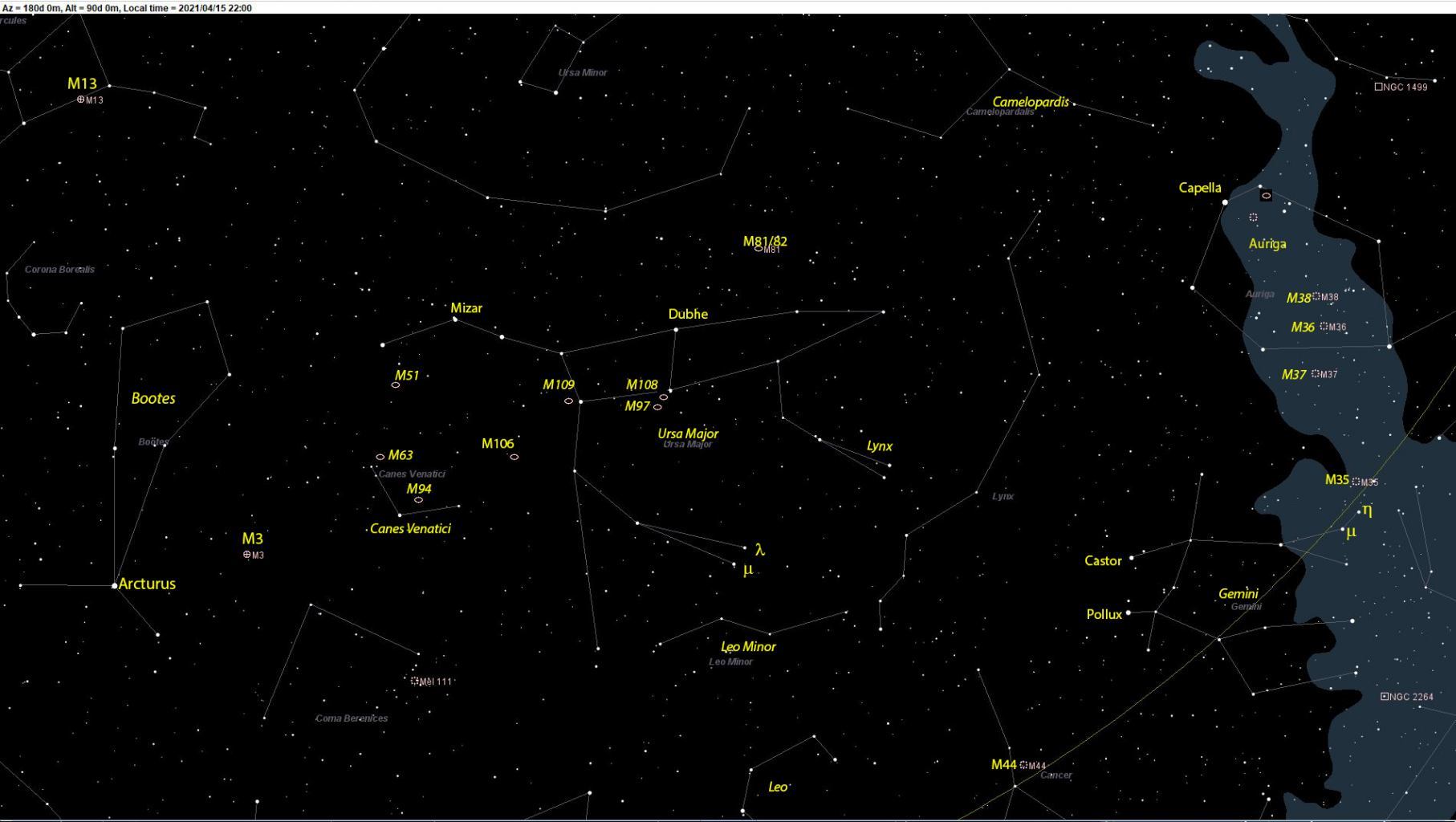 Looking up in April South at the bottom. Click for a larger image. 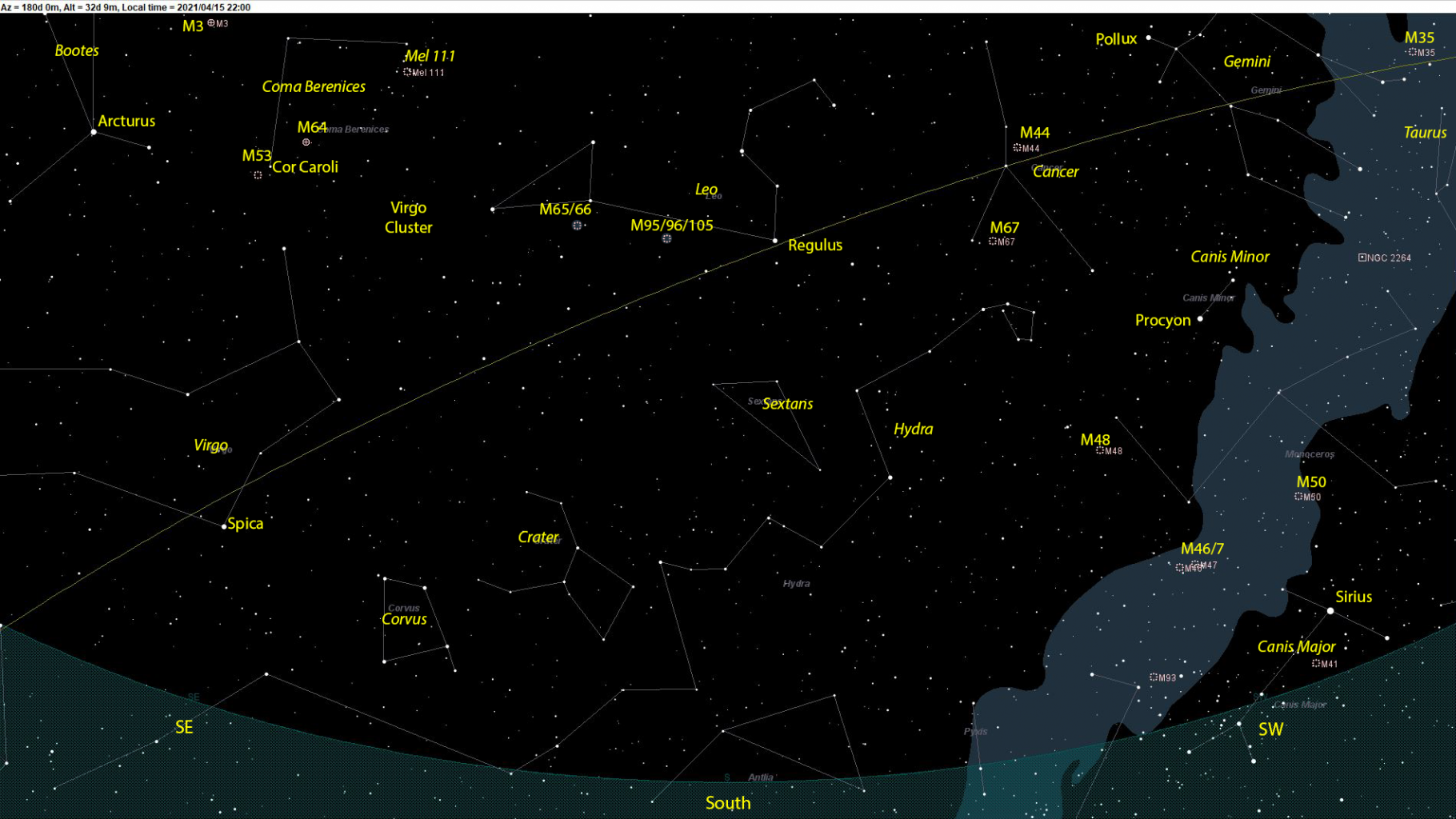 Looking South in April. Click for a larger image. 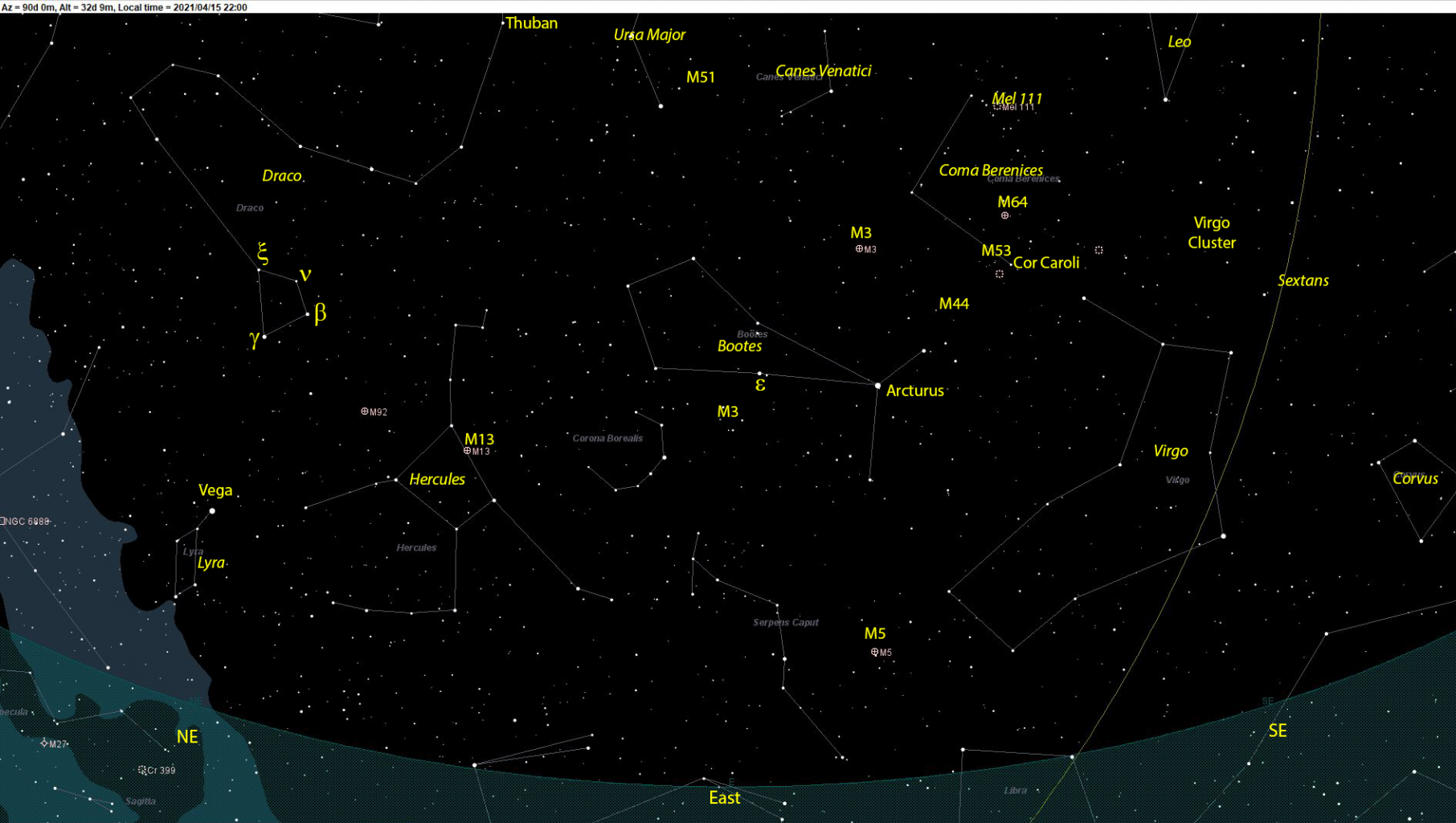 Looking East in April. Click for a larger image. 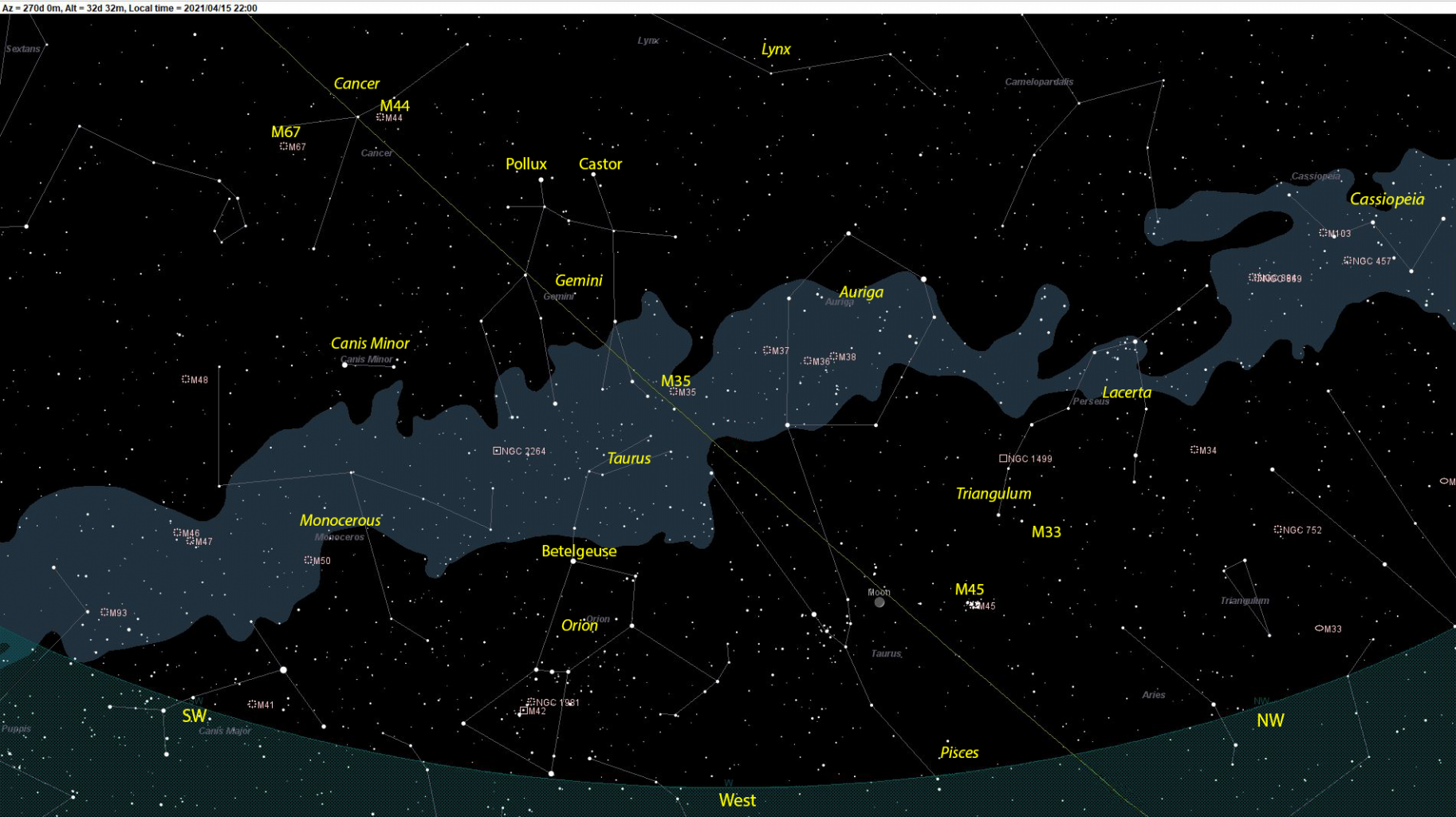 Looking West in April. Click for a larger image. 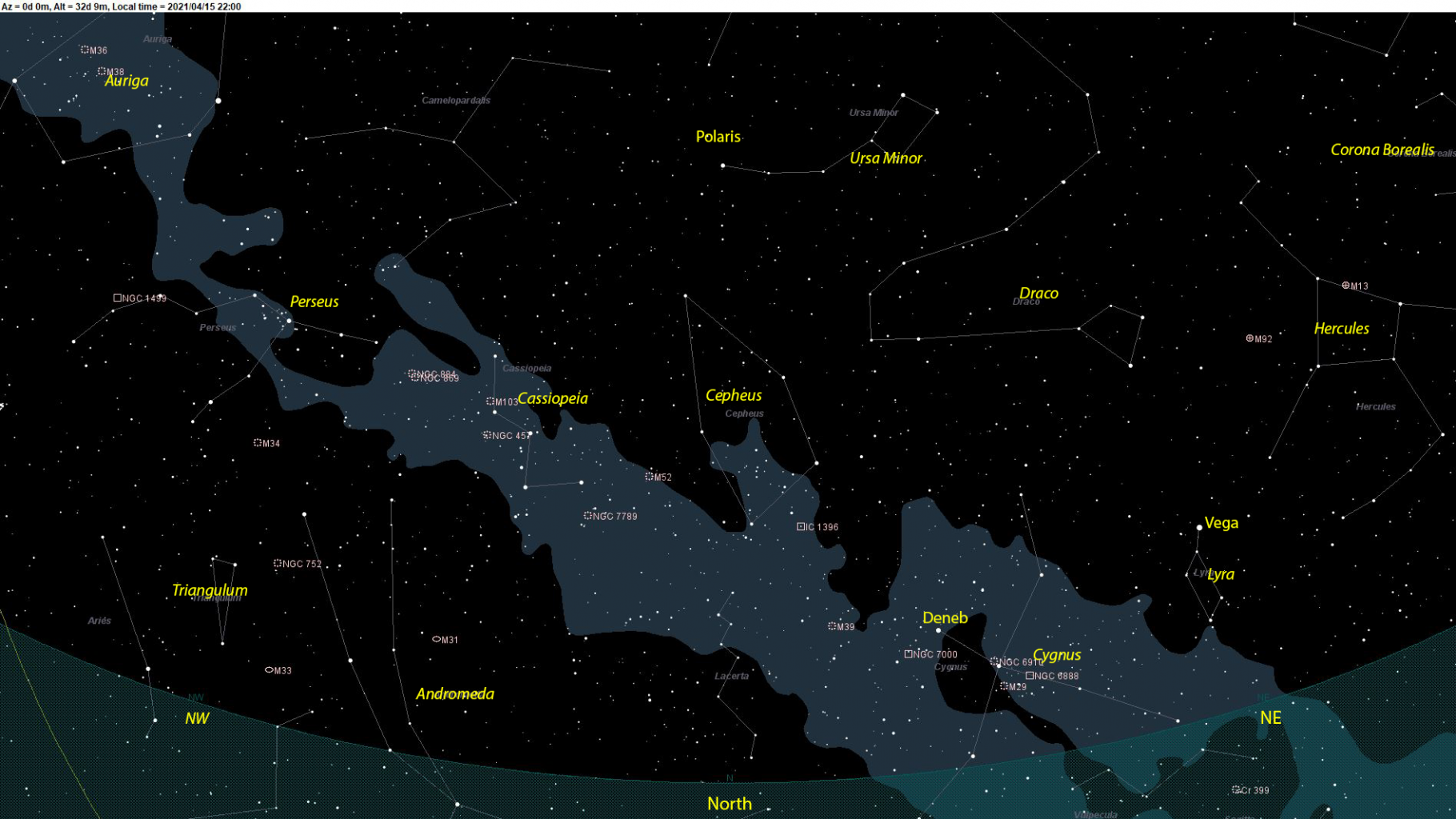 Looking North in April. Click for a larger image.