Very recently, SpaceX announced that they are to test a “VisorSat” when they next launch a batch of Starlink satellites. The aim is to reduce their reflection to the point where astronomers can cope with their presence. They should work better than the “DarkSat” they launched as a test a while ago. They won’t remove all streaking on images, though.

Whether this is enough to preserve the night skies and allow quality images for both amateur and professional astronomers remains to be seen.

SpaceX’s Starship has just managed to pass a cryogenic proof test without bursting, after another dramatic failure early in April. The next stages are to test-fire the associated Raptor rocket, which may happen very soon, and then try a “Hop”. See film footage of the proof test.

The Mk1 Starship 2nd stage module. It is fully reusable, 9m in diameter and 50m high. This will be launched on the top of a SpaceX’s super- heavy lifter, itself 68m high. The combined rocket will be slightly taller than the Apollo Saturn 5’s 111m. 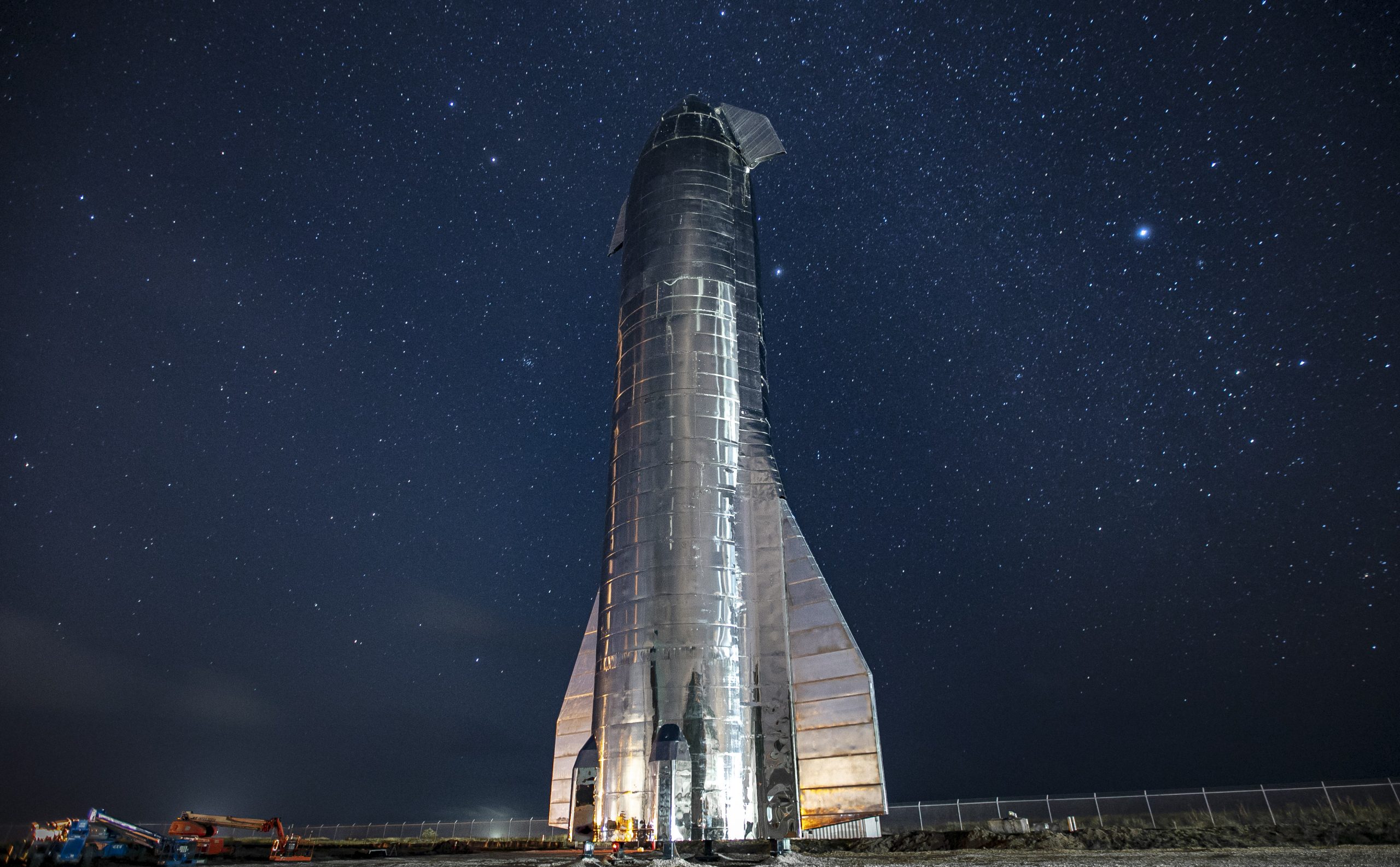 Here is some footage of an earlier test which was not quite as successful but more dramatic…they have learned a lot since then.

Watch out for press conferences about their launch of Crew Dragon, carrying personnel to the ISS – the first crewed launch from the US for quite a while! SpaceX and NASA are targeting May 27th. NASA Administrator Jim Bridenstine says he is “fairly confident that this launch will be at the end of May, beginning of June.

Back in 2008, astronomers managed to get the first optical image ever of a A jupiter-sized exoplanet orbiting Fomalhaut, named Fomalhaut b. Unfortunately, new observations using HST show that it wasn’t an exoplanet, and was probably the highly reflective remnants of a collision between two icy bodies. NASA have released a movie to show what happened to the object:

Our own Solar system has lots of icy dwarf planets in its outer reaches, but none have been observed in a collision yet. Catching such a collision in another stellar system is quite an achievement, even if it isn’t a proper exoplanet!

he Hubble Space Telescope (HST) reached its 30th year of operation on 24/4/20, and will continue to do amazing work until at least 2025. To celebrate this milestone, NASA, ESA and STSci released a stunning image of a star forming region in the Large Magellanic Cloud (LMC), with NGC2014 on the right and NGC2020 on the left. The region is known as the “Cosmic Reef”. The blue colour is emitted by oxygen atoms and the red by hydrogen and nitrogen atoms, which are very hot or are blasted by ultraviolet radiation from giant newly-formed stars. NGC2020 is associated with a massive Wolf- Rayet star (think back to Joanne Pledger’s talk in February), and is an outer layer of the star that has been ejected.

Go to the website to see the image in all its stunning glory. 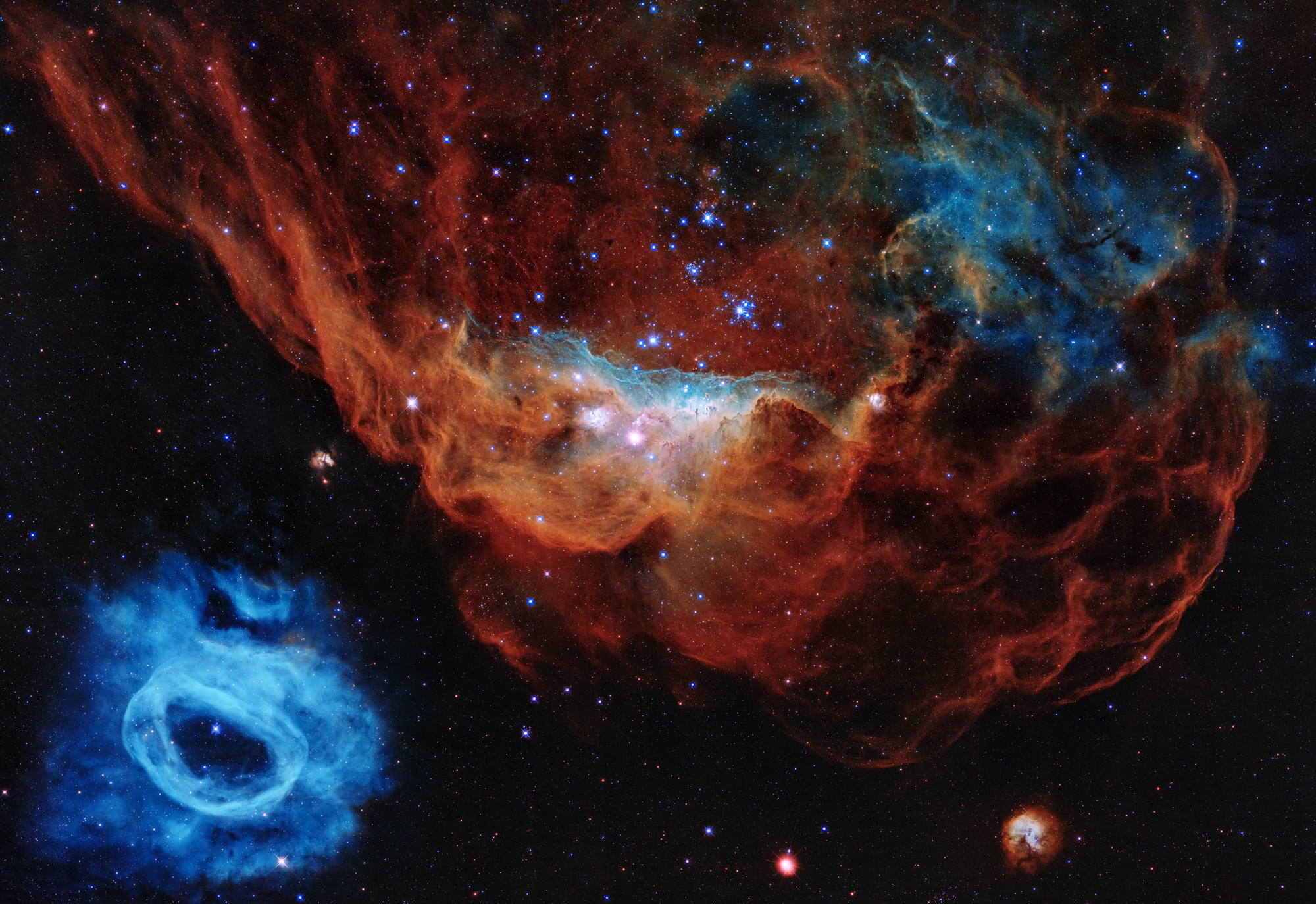 As mentioned earlier, at the end of April HST was used to capture the disintegrating comet C/2019 Y4 (ATLAS). The outflow of gases from the comet as it approached the Sun might have led to its breakup into about 30 fragments. So, what might have become a comet visible to the naked eye sadly won’t.

Comet /2019 Y4 (ATLAS) as imaged by HST on two days documenting the breakup. In addition, see a good discussion

It’s 100 years since a major debate took place to decide whether the Milky Way was the entirety of the Universe and all nebulae existed within it, or whether nebulae were other “island universes” outside of the Milky Way. We take the latter as fact today, but only 100 years ago it was still a hot topic with a lot at stake for the champions of both views. For a lively account of what happened and who was involved, go to: https://astronomy.com/news/2020/04/the-great-debate-of-shapley-and-curtis–100-years-later

The astronomy and astrophysics community is fortunate in having access to loads of free academic publications. Many fields of science have their papers behind paywalls, so it’s difficult for people outside of institutions to do research. Two of the most important ones for us are given below.

The Astrophysics Data System (ADS) is a database of published papers going back centuries and is right up to date.

To use it, try clicking on First Author and entering a name in the field that appears (e.g. Hubble). Then click on date and enter 1926-1930 in the field that appears. Then click on the magnifying glass, and you’ll get a list of papers that fit the criteria. Click on a paper, and you’ll get the details (with an abstract if one exists), and on the right you can access the actual paper (subject to certain paywalls!) using the small icons e.g. Publisher, pdf symbol. Try the 1929 paper (no. 6 in the list) – you’ll see the first evidence that the Universe is expanding! You could also try seeing just how far the database goes back – try searching on Herschel 1770 – 1790 and see if you can find a paper entitled “Account of a Comet”. What had he actually discovered? You can also search on specific keywords e.g. pulsar, supernova, M31.

Another highly valuable resource is ArXiv This is where people put their papers that are on the verge of publication, free of paywalls. While it is cutting-edge and free, the papers aren’t necessarily peer-reviewed and a few may not stand up to scrutiny. Some April 1st postings are brilliant (e.g. explaining the severe and long Winters in Westeros!). You can search on specific authors or topics of interest to see the latest papers on a topic. You will see an Astrophysics category link lower down the page, to make the search more specific.

This is possibly the simplest astrophotography thing you can try bar a single shot. I haven’t done this for many years until a few days ago, so it was all guesswork. I was very pleased with the result. 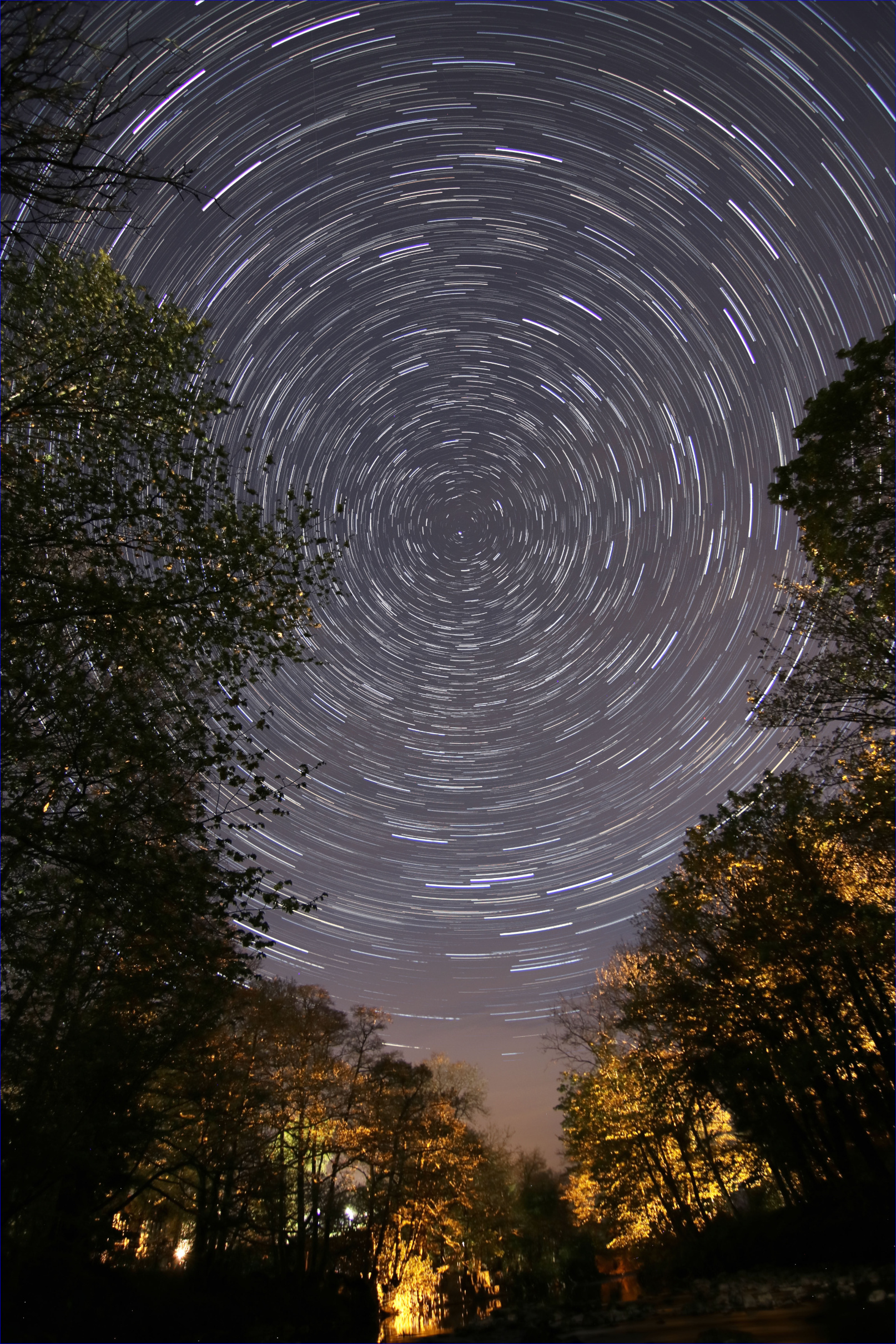 Turn off the autofocus and image stabilisation. Set the camera to manual and open up the lens to its biggest aperture – smallest f-number. Set exposure to 30 seconds and a reasonable iso – not too low or too few stars will be visible, equally not too high or it becomes cluttered. Some experimenting is required to get these right. There is no right – just does it look good! If 30 seconds exposure isn’t enough for your lens, try longer although without an intervaometer, that could be rather tedious.

The hardest bit is getting a reasonable focus. Autofocus will not work. Looking at a realtime image, Liveview, on the back screen helps a lot. Initially manully focus on a distant object and then find a bright star. Zoom right in [on the Liveview screen and not the lens zoom!] on the star [or even the Moon or Venus] and manually adjust the focus until the star is as small as possible. If your camera doesn’t have the Liveview facility, just take a shot, look at it zoomed in, and repeat. That is just a bit slower and more fiddly.

Take lots of sequential photographs for about an hour or so. To get the trails image, simply use the free startrails software available from , add the jpeg images [RAW files are not required which saves space on the memory card] and ‘press’ the button. It even sorts out the foreground for you an can give you a timelapse video if you want one.

The picture above was taken on my Canon EOS 750D with a Tokina 11-16mm wide angle lens, set to 11mm and f2.8. 76 exposures of 30 seconds each at ISO800. I set the camera to repeatedly take pictures, this symbol on my Canon and triggered the shutter. It continues to take images until I released the trigger – hence the switch. I was laid on the side of the River Kent, 50m or so from my house, with a bottle of beer in one hand, being buzzed by hunting bats whilst I stared at the sky… many satellites and one solitary late Lyriad meteor. A few minutes later at home, I had that picture. 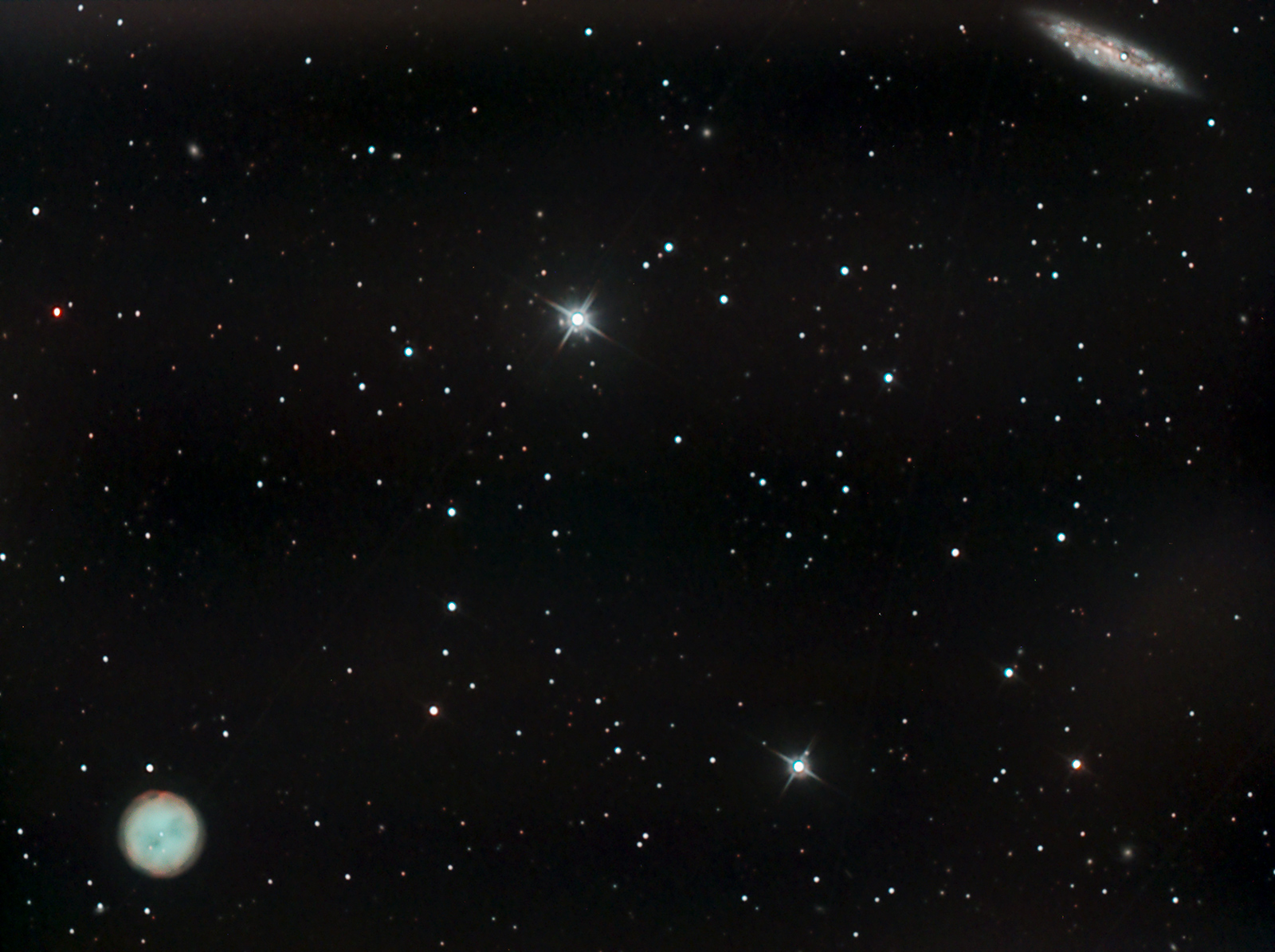 M97 the Owl Nebula and M108. Imaged from Kendal 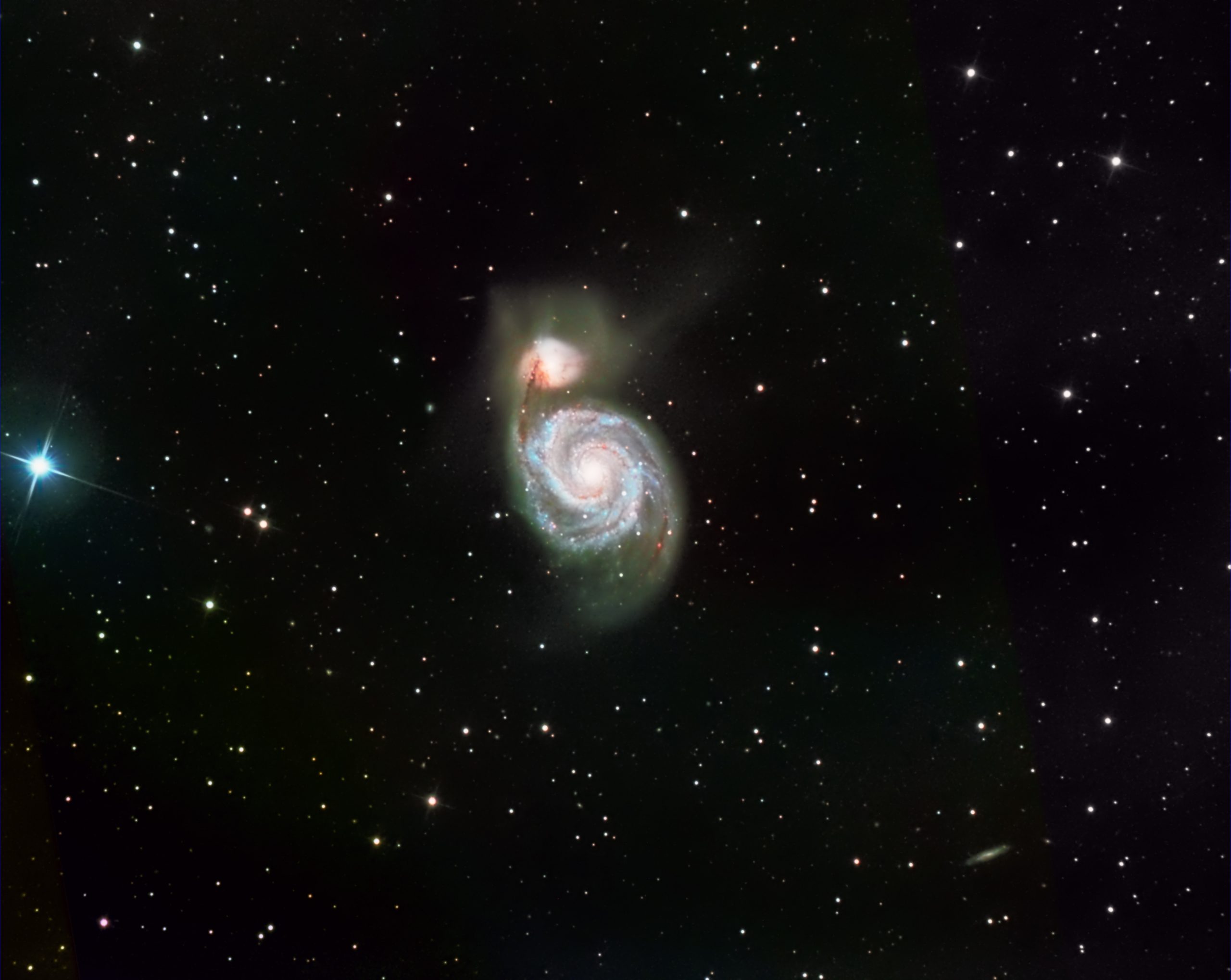 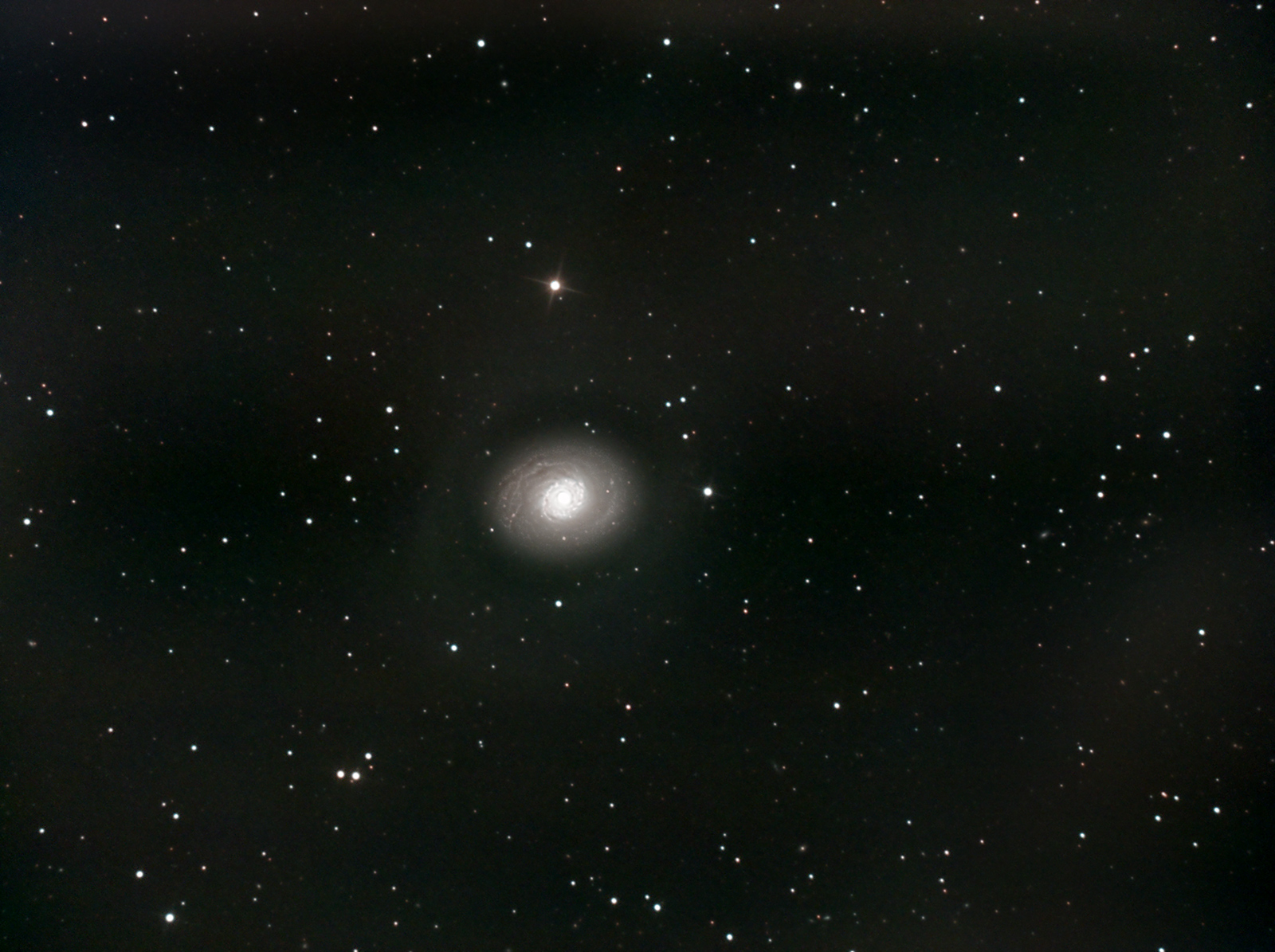 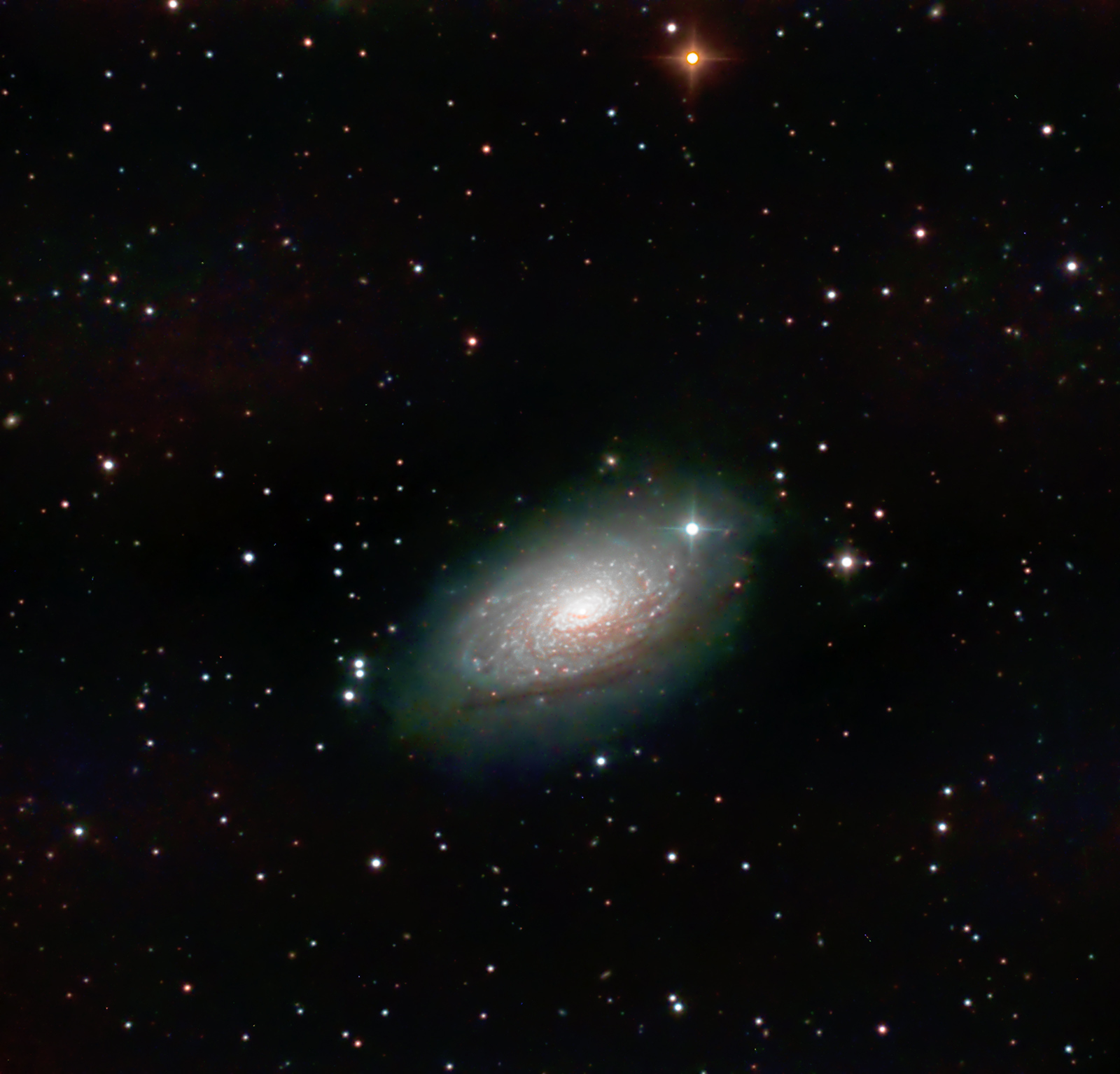 M104 The Sombrero Galaxy
A bit of a challenge as only 20° above the horizon and directly over central Kendal. 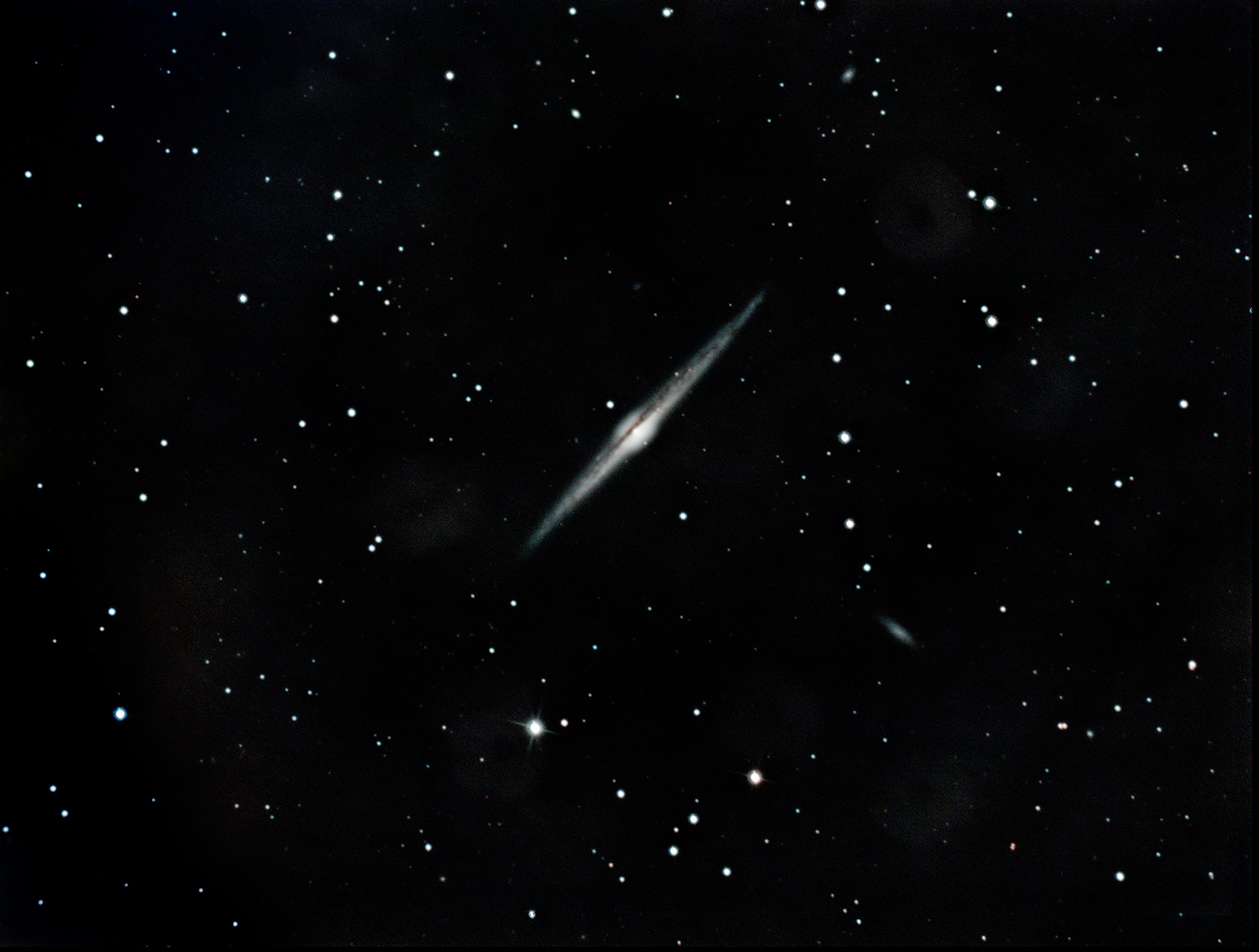 NGC4565, the Needle Galaxy in Coma Berenices. Imaged from Kendal.