They are customizable to your location – the links below are set to Kendal.

The ecliptic is rather low in the sky making the planets relatively difficult to see, especially the inner planets Mercury and Venus, and the views will be poor through any telescope.

Mercury is rather close to the Sun, 9° mid-month and so will be difficult but possible to spot in the evening dusk. See Venus.

Jupiter/Saturn are both still obvious with Saturn leading Jupiter as they dive towards the horizon. Jupiter sets 21:20 on December 15th whilst Saturn sets 19:38. By the end of the month, Saturn sets around 18:44 with Jupiter following about 1 hour later.

Uranus is visible most of the night (setting around 5am mid-month) at magnitude 5.7. It should appear a small (only 4” angular diameter) slightly blueish coloured disk in binoculars or a small telescope.

Neptune is visible until around 23:00 (mid-month) at around magnitude 7.9. Sitting around 25° above the southern horizon at the times of our maps (20:00). At only 2” angular diameter, and being so faint, you’ll need to use an optical aid to see it. It should appear a lovely blue colour.

With early evening ISS visible passes at the start of the month, the last being December 8th, they restart as morning passes on December 18th and continue until January 6th. See Heavens Above website for further timings.

Note the two Christmas day passes starting at 05:22 – 05:25 and 06:56 – 07:02, just the right time to kid the grandchildren that that is Santa going home after a long and busy night! The latter one is very bright – rising in the WSW, passing under Leo before a maximum altitude of 49°. Merry Christmas.

The next showers are:

Geminids meteor shower – December 13th. Active December 7th to 17th. Peak occurs at 73% Moon which sets at 01:42… Maybe over 50 meteors per hour. Best after moonset. Meteors of the white and bright so despite the Moon, one worth looking out for around 2am onwards on the 14th. The radiant in Gemini transits around 02:30 GMT.

Quadrantids meteor shower – January 3rd Active December 12th to January 12th and peaking around January 2nd/3rd. This shower tends have a narrow peak of only a few hours. Typically, 20-25 meteors per hour. The shower peaks close to New Moon, almost ideal conditions foe this shower. The radiant is in Bootes, home to the bright star Arcturus (find that by following down the handle of the saucepan of the Plough asterism), which is circumpolar so the shower will be active throughout the night. However, Bootes culminates (highest in the sky) after dawn, so it is likely that the best show will be in the pre-dawn hours. At 1am, the radiant is only 26° above the horizon. You will see some, but obviously not at their best.

We discussed this comet in detail last month. It is brightening as expected. Currently about magnitude 7. At its best in the morning sky around 4–5 am.

The graphic shows the path of the comet on a daily basis at 05:00 from December 1st to December 10th. The comet moves closer to the eastern horizon each day. The constellation positions are for 05:00 December 7th but Arcturus (faded) is also shown for December 1st, 4th and 10th as a reference. 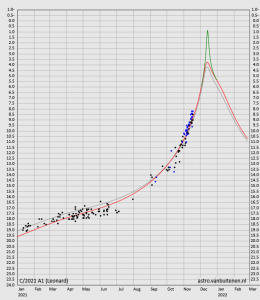 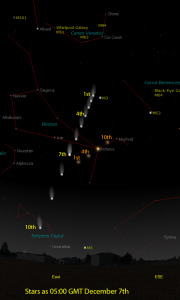 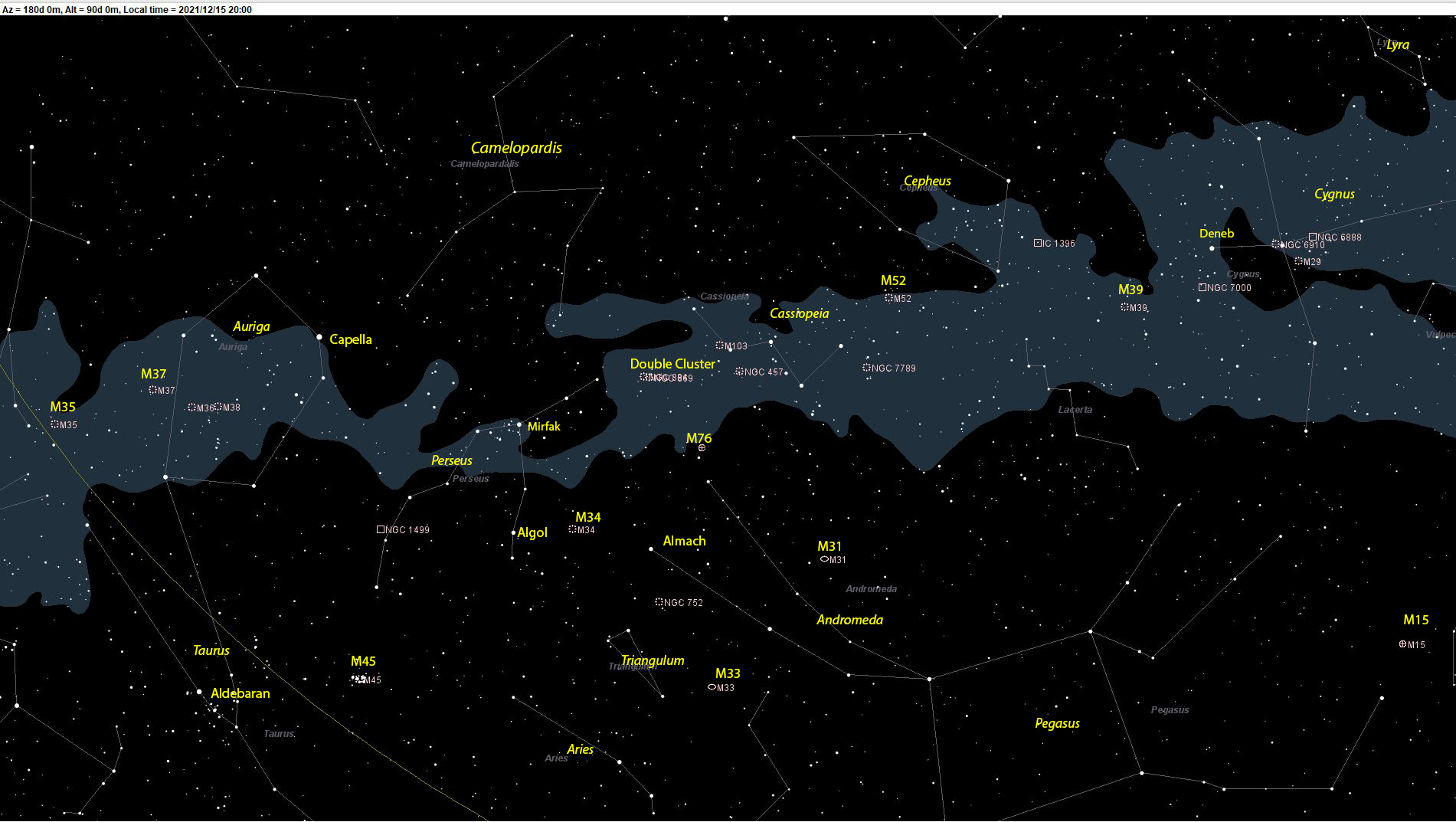 Looking up, south at the bottom. Click for a larger image.

We still have the fabulous Milky Way right over your heads and the asterism of the Summer Triangle consisting of Altair, Vega and Deneb still very prominent. This is a great time of year to see objects of interest in the constellations at the zenith: Cygnus, Lyra and Cassiopeia.

The most obvious star cluster is The Double Cluster (NGC 884/869) situated between Cassiopeia and Perseus. In addition, there is Caroline’s Rose, NGC7789, and M103 in Cassiopeia, M34 in Perseus, M29 and M39 in Cygnus for starters. The area is a joy to behold in binoculars on a dark night. There is the globular cluster M62, sometimes known as the Flickering Globular as it seems to change brightness – purely an optical illusion. For wide field imaging photographic targets, what could be better than M31, The Great Andromeda Galaxy and nearby telescopic M33. In addition, there is the North America Nebula complex, NGC7000, in Cygnus and the California Nebula, NGC1499. With a tracked 70mm lens you could capture both NCC7000 and the Pleiades, M45, in one shot.

Whilst on double stars, you must look at Albireo, β-Cygni. This is a beautiful low power telescopic object the brighter star golden and the dimmer one blue. See photograph later. Similarly, Almach in Andromeda is a pretty colourful double and not too far away, roughly half way between Almach and Cassiopeia, is the planetary nebula M76, The Little Dumbbell in Perseus.

In Perseus, we have another open cluster, M34, and nearby is Algol, the prototype for a class of eclipsing variable stars. Usually magnitude 2.1, it drops to 3.4 every 2.86 days – (2 days 20 hours 49 min), a rather noticeable change. 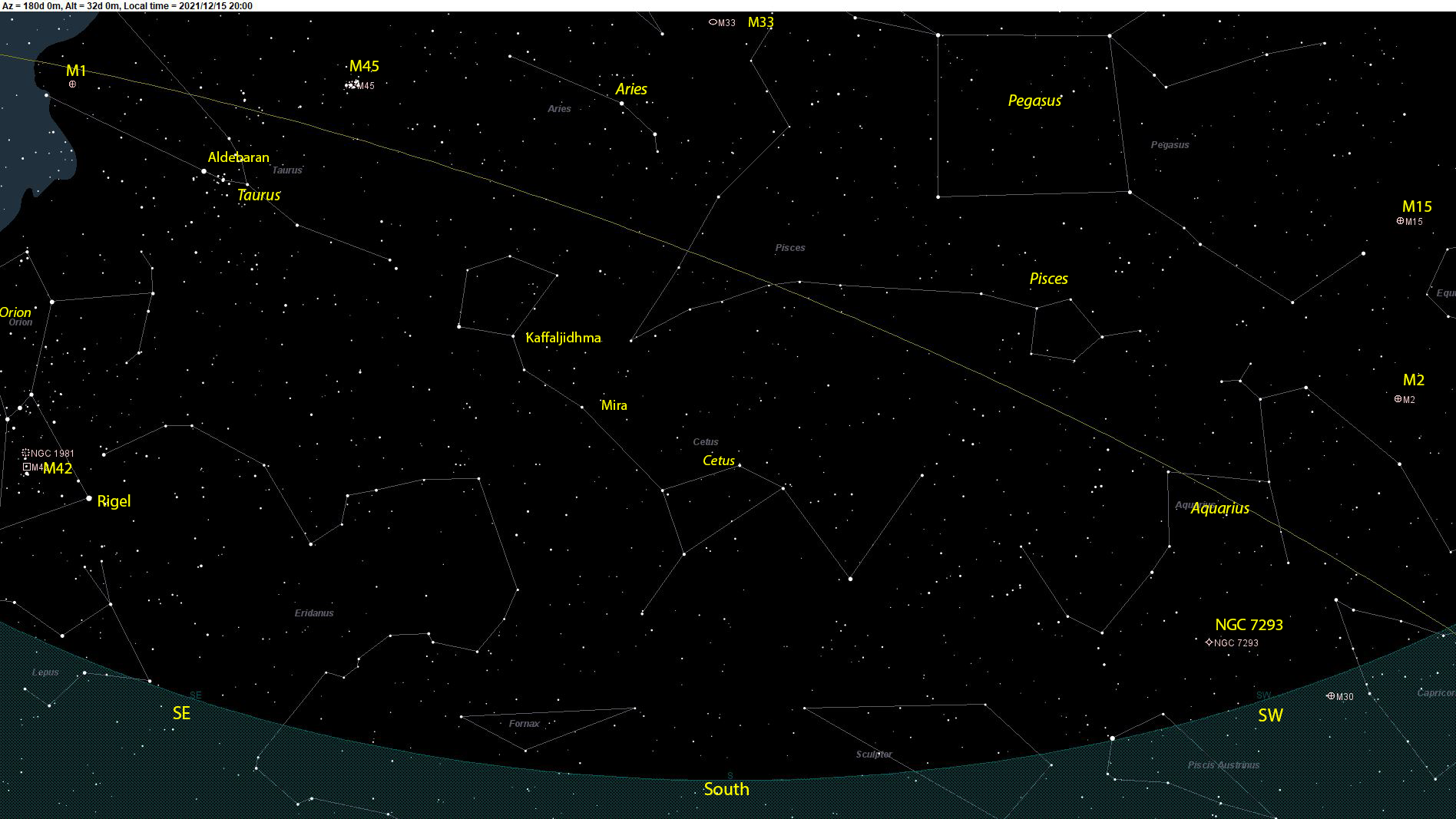 Three planets to look for here: Mars is unmissable Uranus in Pisces should be visible in binoculars but tiny distant Neptune should be more of a binocular challenge. You might want a good star chart/app for that one!

The two bright and large globular clusters M2 and M15, both about magnitude 6 and 12’ in diameter look good in binoculars or a small telescope. Orion is starting to become prominent in this general direction, but more on that later. 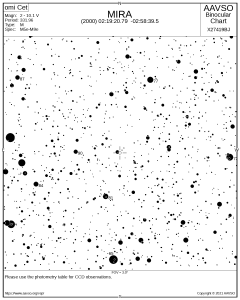 The ‘wonderful variable star Mira’ as it is sometimes called, is well placed. (Mira in latin means wonderful). This pulsating red giant star changes brightness by over 6 magnitudes, from about 3 to less than 9, with a period of 332 days. hence changing from an easy naked eye star to invisible without optical aid. It is currently fading from a peak in mid- August and is expected to be around mag 6.5 in December. Try to see if you can measure its magnitude using just a pair of binoculars and your judgement.

The chart from the AAVSO show s various comparison stars visible to a binocular user. Judge where the brightness of Mira, the central cross, compares to the other labelled stars. 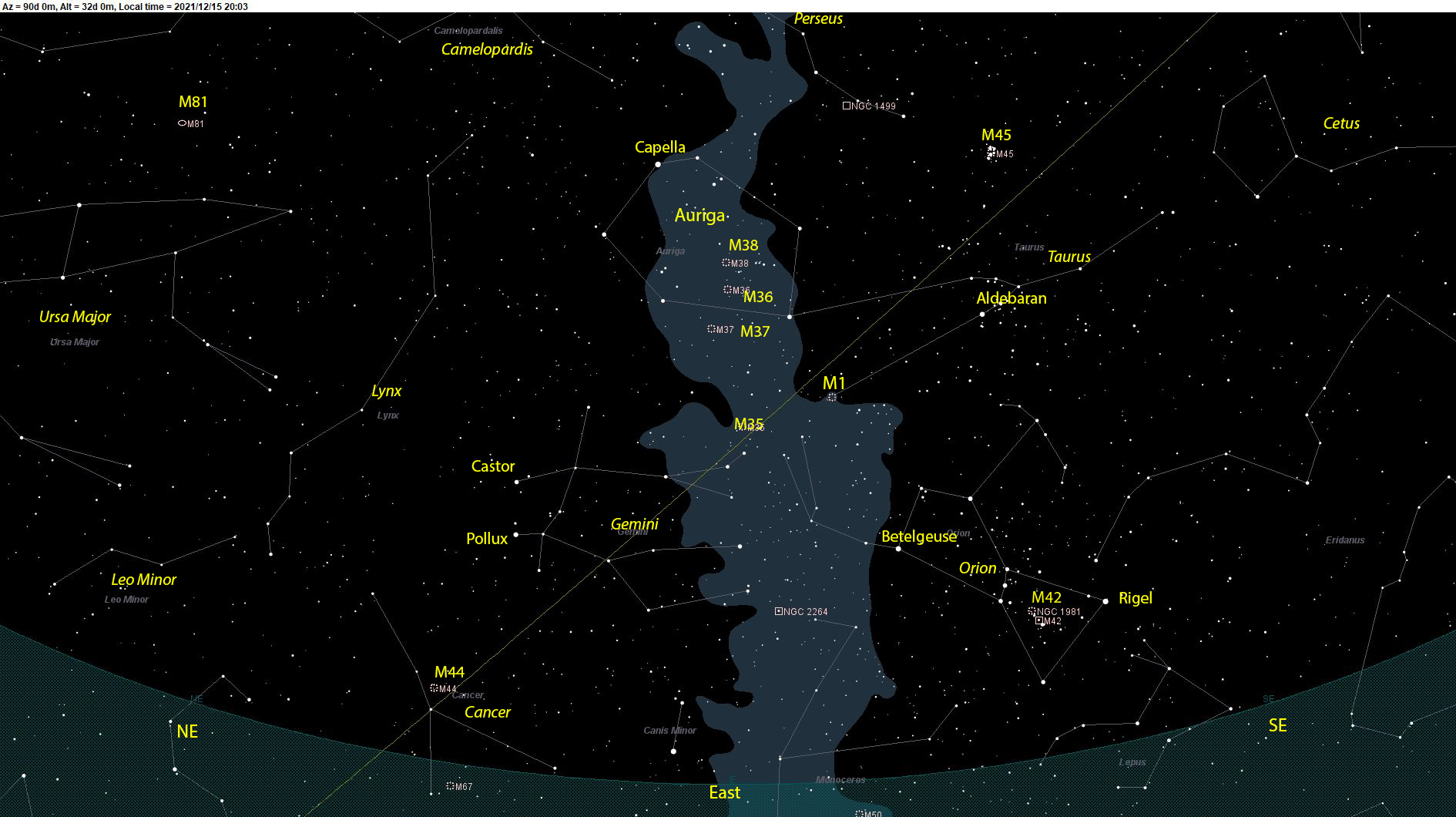 Orion is up around 19:00 and there is so much to see here – worth an article on its own! But will be much better a few hours later. The most obvious telescopic and binocular target is the Great Orion Nebula, M42, always a joy to look at. In nearby Taurus, there are The Pleiades, M45, which are easily seen as a fuzzy patch easily resolvable as stars in a pair of binoculars. This object makes a good widefield photo-op as well as a great telescopic image when misty gas becomes visible. You can also get both M45 and the California Nebula, NGC1499, using a 70mm focal length lens on a DSLR mounted on a tracker mount (i.e. Ioptron or Skywatcher Star Adventurer etc). A much more open cluster in Taurus is the vee of the Hyades with Aldebaran at one end. In addition, there is the Crab Nebula, M1, roughly midway between Capella and Betelgeuse. This fine supernova remnant, the result of the supernova recorded by Chinese astronomers in 1054, is a wonderful photographic object. If you have sufficient resolution, and image every few years, it is possible to see changes within the nebula – a great long-term project!

Scanning through Auriga with binoculars, the trio of Messier objects, M36, M37 and M38, will appear as faint misty clouds if you have a dark sky. Gemini is also now rather prominent too with white Castor above orange Pollux. The only really interesting binocular object is the open cluster M35. Rising about 19:00, there is another hazy naked eye object in the eastern sky – the open cluster M44 Praesepe or the Beehive cluster. A spectacular sight in binoculars. This will be much better by 23:00 when it will be 30° high. 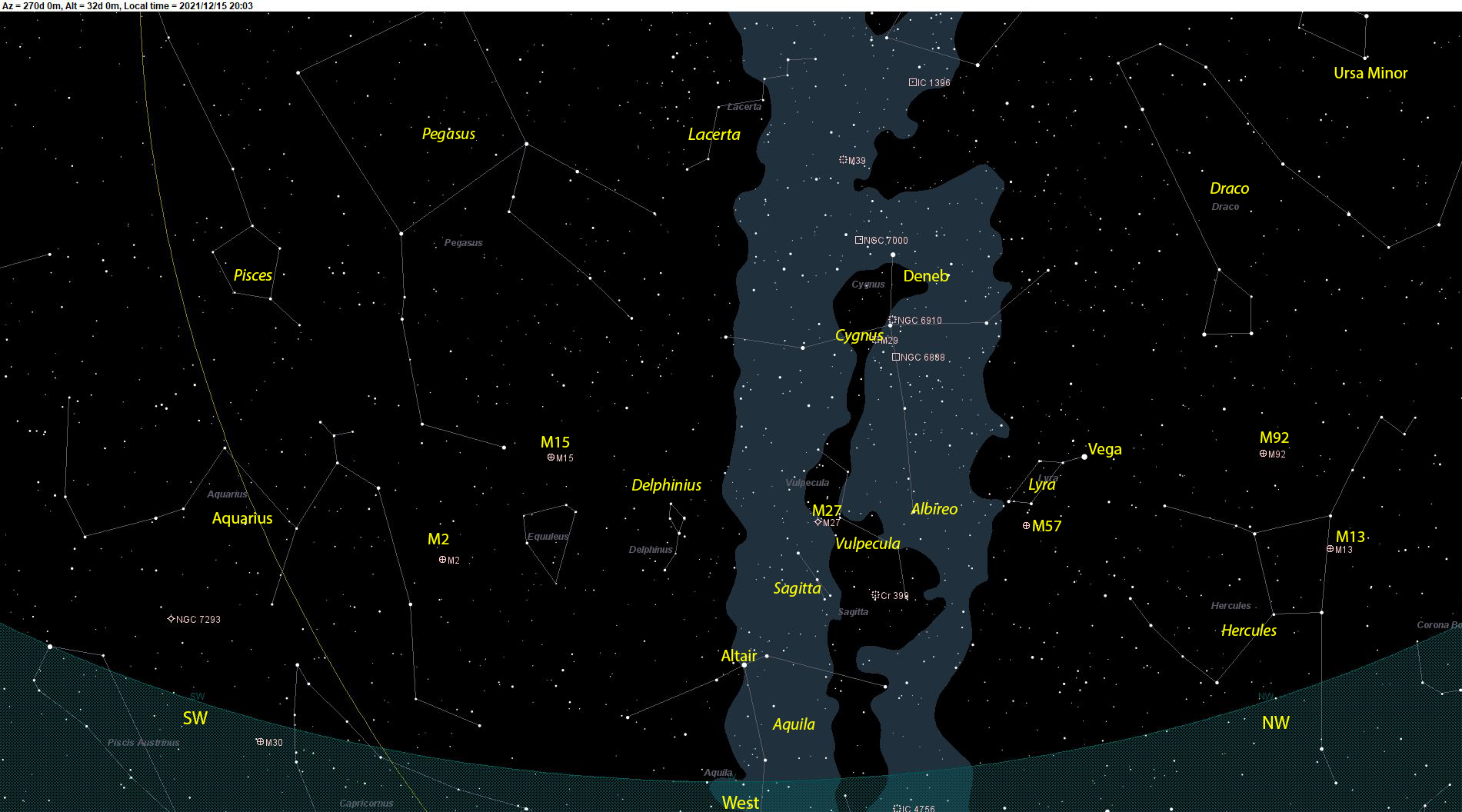 Cygnus is still prominent for a few more weeks although Lyra is getting lower now but still worth a look. Look out for Delphinius, the Dolphin, as it [being fanciful] frantically tries to swim away from the horizon! The whole constellation neatly fits in the field of view of a standard pair of binoculars. The crowning glory of planetary nebulae, the Ring Nebula, M57, in Lyra is still a splendid fuzzy ring in a small telescope although is starting to get a bit low. Just 2° from Vega is The Double-Double, ε-Lyrae, a binary star in binoculars, but with a telescope each of these two stars is seen to be a double star itself. Of course, the other outstanding object must be the Dumbbell Nebula, M27, planetary nebula. Lovely in a telescope but not particularly well positioned now and by 21:00 mid-month it is probably too low. 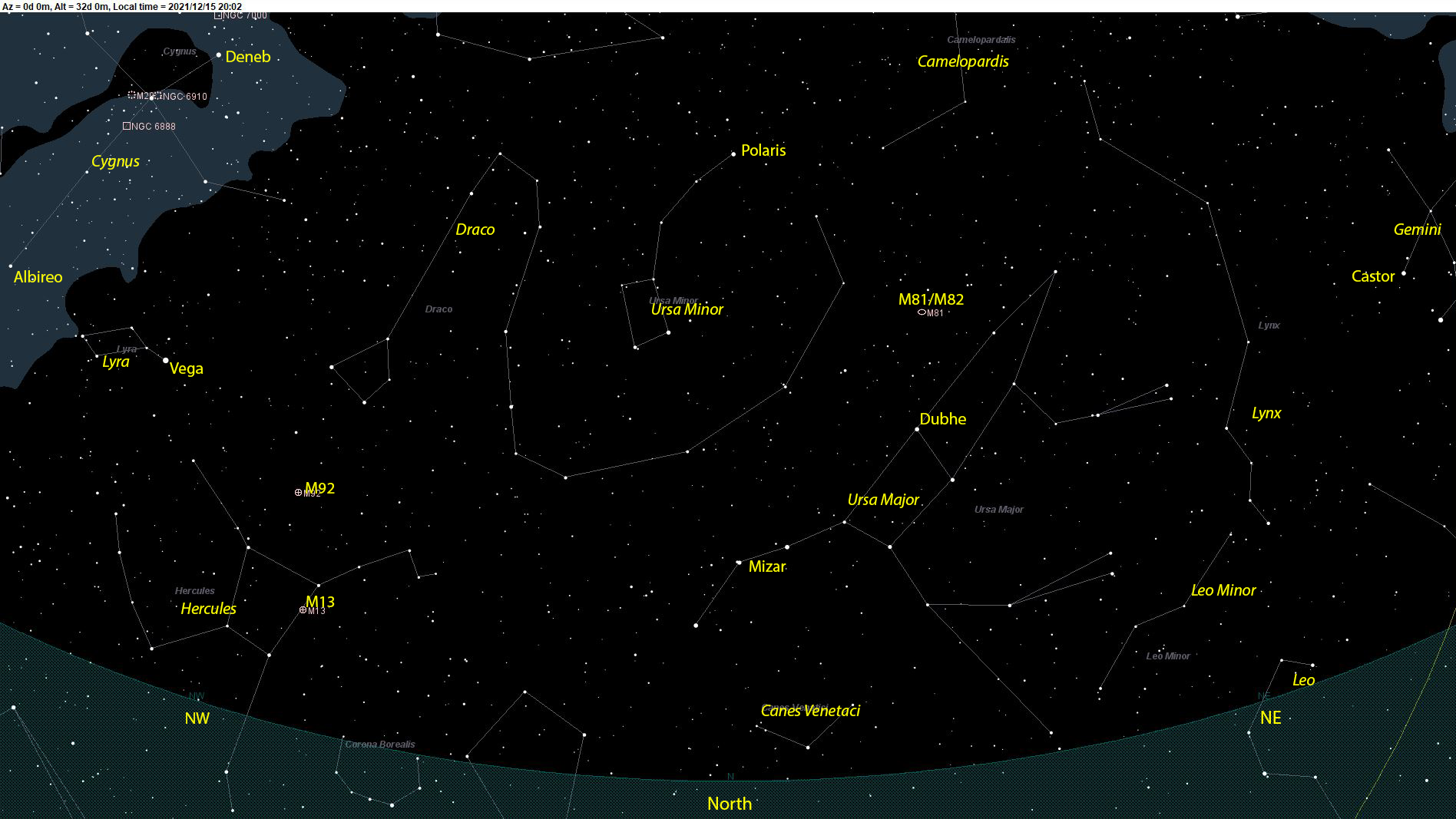 Watch out for aurora across this region of sky. Ursa Major is not at its best for our map times but it provides a handy reference for north. Of interest is the double star of Mizar and Alcor, once regarded as a test of eyesight but I find fairly easy. Mizar is also a splendid double of unequal components. The separation of only 14.5” requires a telescope to split them. And the pointers, Dubhe and Merak tell you where to look to find Polaris. Finally, there is the binocular and telescopic galactic duet of M81 and M82, also known as Bodes Galaxy and the Cigar Galaxy respectively. M81 is a near face on spiral whilst M82 is edge on. However, M82 is undergoing massive star burst and colour photographs show a striking ‘jet’ of hot hydrogen streaming from the core. The duet makes a fantastic photographic composition. You’ll need long exposures and a focal length greater than 400mm to show it well.

Given the current situation regarding coronavirus, observing evenings can not occur.