Ian Bradley welcomed members and announced notices. A 200 mm Sky Watcher telescope was brought to the notice of members as used-only-once.

Until late August the sky remains in the twilight throughout the night in Kendal. Noctilucent cloud (NCL) has been witnessed more frequently this year by members. The better times to keep our eyes out are after midnight.

For details of the Summer Triangle, summer constellations of Sagittarius and Hercules see our Sky Note & Observing Evening .

For the next decade a space observatory, Luvoir , is proposed to study exoplanets. In comparison to the Hubble Space Telescope’s 2.4m mirror, Luvoir-A will orbit a 15 m mirror and Luvoir-B an 8 m mirror.

Euro Rover on a Japanese rocket 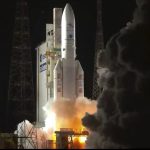 The European Space Agency and the Japan

Aerospace Exploration Agency have launched two probes on a seven-year mission to investigate the innermost planet, Mercury. results will provide information on the physical attributes of Mercury and the origin of the Solar System.

In a collaboration between NASA , ESA and the French CNES, a Martian Moons Exploration project (MMX) is set to launch a robotic space probe in 2024. The mission will fly by the smaller Martian moon, Deimos , but will furthermore bring back the first samples from Mars’ largest moon Phobos .

Two EAS members, Eddie Dealtry and David Glass gave separate presentations on aspects and the background Apollo 11 mission landing the first astronauts on another body in space, the moon.

Eddie firstly covered the Space Race from 1957 where the Russian satellites, probes and cosmonauts continually scored firsts until the race became a Moon race with the control, accuracy and high-quality imagery demonstrated by Surveyor 1 and the subsequent Lunar Orbiter 1 .

Secondly, Eddie went through the Software Engineering that went into the 2 Kb read-write memory, Apollo Guidance Computer (AGC) having been developed and tested on the first mainframe computer – all on the first integrated (printed as opposed to manually wired ) circuits. A program, P63 , that was involved in the 1202 alarm was listed and the post-event management report displayed. 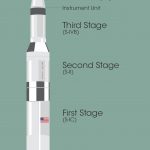 David illustrated the structure and described the propulsion systems developed through the Saturn rocket family to the eventual moon shot of the Apollo crew on the gigantic Saturn V . The significant engineering issues and trade-offs were demonstrated by the examples of:

David then went through the Apollo missions 1 – 10, starting with the initial tragedy of Apollo 1 and finishing with the full rehearsal of Apollo 10. David left Apollo 11 to the extensive media coverage to follow in the next few weeks.

EAS next meeting will be Monday 2nd September