Moira Greenhalgh welcomed members and announced notices. The Institue of Physics has changed their programme at Lancaster University next Wednesday 12th May to ‘Pluto’s “desert”: methane ice dunes on a glacier on an airless world’. See our Welcome page.

Three bright summer stars are Vega, Arcturus and Deneb. The red star Arcturus in Boötes can be identified by following the handle of the Plough (Ursa Major) backwards. Globular clusters such as the compact and bright Hercules Globular Cluster can be found in the constellations of Boötes and in the neighbouring Hercules. 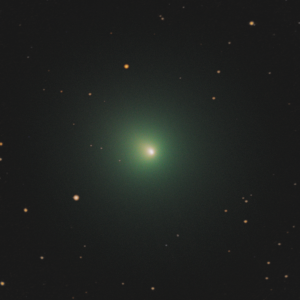 Results from observing the tail of Comet Wirtanen, &designated 46P, have detected a Deuterium to Hydrogen ration similar to that in Earth’s oceans. The previous cometary observations have been dissimilar throwing doubt on the proposal that cometary collisions in the early solar system could be the origin of the oceans. The 46P observations have been of the tail as the comet approaches radically close to perihelion, (close solar encounter) when the core of the comet is being blown out into the tail. Hence, the new measurements may well be more representative of the Deuterium to Hydrogen ration out of cometary cores and add weight to the theory that cometary hydrogen is the source of Earth’s oceans.

Recent online videos are available showing a trail of 60 satellites through the night sky. The satellites enable greater coverage of the internet over the surface of the earth and Spacex. 20 have been granted permission for a total of 12,000.

What is a Telescope?

Simon White gave a very practical demonstration of not so much ‘What is a Telescope’ more ‘Where is that image inside a telescope’? Pairs of magnifying glasses were handed around. Members could use one glass to create an image and the other to find where it was focused and magnify it with a second glass. The conclusion became obvious, after some experimentation that the image exists behind the object all the time and the optical system of a telescope provides access to and magnifies the focussed image. 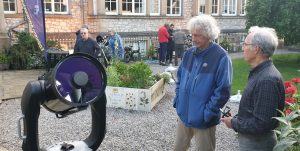 Three of the members’ telescopes and the society’s 11″ Cassegrain telescope were assembled outside in the Museum yard. Members and guests could wander, mingle and question the practicalities of various astronomical telescope designs and the members’ different procedures for observing. 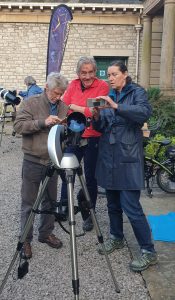 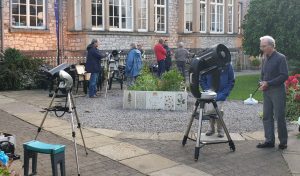