Ian Bradley opened the meeting welcoming members both new and old. He later presented some astrophotographs taken from his recent trip to New Zealand. These included the Moon and Orion completely upside down from the perspective we are used to seeing these objects in the northern hemisphere. Particularly impressive were his views of the Galaxy taken from a dark sky location in New Zealand and images of the large and small Magellanic clouds. These are the two satellite galaxies that orbit our own Milky Way and are not visible from Cumbrian skies.

April`s Moon watch was particularly successful with many members of the public attending. As sunset is much later during the summer months the next Moonwatch will now be in October 2019. 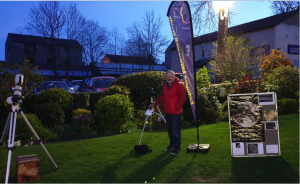 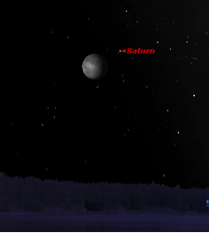 23rd May – Early Morning – Saturn will lie to the right of the waning gibbous Moon an excellent photo opportunity.

The Ursa Major constellation (The Plough) remains almost directly overhead above where you may be able to observe the galaxies M81 and M82.

On the 28th May, Ceres is at its closest approach to Earth. It will have a magnitude of 7( too faint for the naked eye) so with the help of binoculars you should be able to spot it. A planetarium program such as Stellarium will show you its position in the days before and after its closest approach.

The News section contained updates on the two current asteroid sample-return missions: Hyabusa 2 investigating Ryugu and OSIRIS-Rex looking at Bennu. Both are near-Earth carboniferous asteroids. Hyabusa recently fired a copper bullet into the surface of Ryugu, and the mission will seek to capture some of that pristine debris and, like OSIRIS-Rex, then return to Earth.

The other big news was the picture of the black hole – M87* – at the centre of a supergiant elliptical galaxy in Virgo, about 55 million light years away. The image was obtained by Very Long Baseline Interferometry, using eight radio telescopes collecting radiation with a wavelength of 1.3mm. UCLAN are part-sponsors of the James Clark Maxwell telescope in Hawaii which provided one point in one on the baselines and were also involved in analysing the data.

A high-res image of the black hole in M87 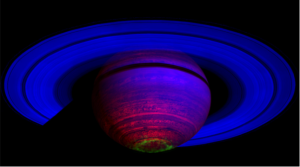 In this Cassini image below a band of southern aurora in visible in green.

An excellent talk, which was most informative was delivered by the very competent researcher, Dr Sarah Badman. She explained early in her career she was able to work on data received from the Cassini spacecraft just after it had arrived in orbit around Saturn.

The mechanism for the aurora borealis was explained whereby charged particles emitted from the sun interact with the Earth’s magnetic field, are given energy and collide with atoms and molecules in our atmosphere. These collisions result in ionization of the atmosphere which makes up the aurora. Collisions with oxygen produce red and green auroras, while nitrogen produces blue and purple colours.

Aurora in other solar system planets occur only if a magnetic field is present to interact with the solar wind. The images presented in the talk were quite stunning. 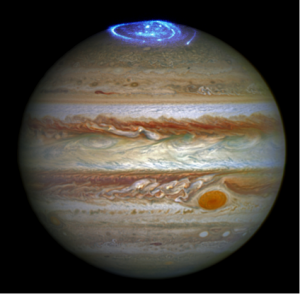 Here the image shows a curtain of glowing gas which is wrapped around Jupiter’s north pole.