The chairman welcomed members and guests to the November meeting.

A Celestron telescope of some vintage has been donated to the society. Currently, the telescope is being renovated, mould removed from the tube and optics, to be used at EAS Observing Sessions.

Mars is the only feasible planet for observing this month and there are two periodic comets, one the target of last year’s Rosetta mission, that will be visible towards the end of November. See  Sky Notes.

Check for the  Observing Evening,  page for the next member’s evening.

Concepts of Dark Sky Accreditation were introduced together with the implications for and actions to be potentially taken by authorities. In particular, ‘Core’ dark areas in the Lake District and surrounding ‘Buffer’ zones, where light pollution will impact the Core, need to be identified. Members were asked if they wished to help measure the sky darkness using light meters loaned to them by Friends of the Lake District.

An extensive Q&A followed querying the implications for towns and rural communities.

An illustrated talk on Hyabusa2

After a speaker cancellation, David Glass valiantly presented a talk on the progress of the probe Hayabusa 2, now in orbit around Type C (low metal mostly rock) asteroid Ryugu. 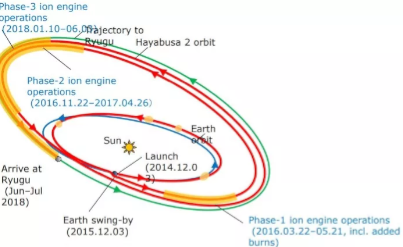 Of the multiple propulsion systems, the  Ion drive thrusters, with a force of micro-Newtons that consume a small amount of fuel over long periods, are deployed to adjust the inter-planetary transition orbit. The Ion Thrusters consume far less fuel than conventional thrusters.

Hayabusa 2 will launch a number of deployable modules designed to land on Ryugu and bounce up to 15 times between measurements and experiments.

A Small Carry-On Impactor weighing 2 kg will be ‘fired’ at a selected area of Ryugu to create a crater, while the main module hides behind the asteroid, where the sub-soil will be revealed as a target site for material sampling.

Hayabusa 2 will retrieve samples from the target crater and two other sites and then return a capsule of samples back to Earth.

Finally, a member presented some recent astrophotographs taken in the Kendal area.