Chairman’s report on the work of the committee over 2018.

Chairman stood down and a new committee was elected making seven members in all. Chairman for 2019 to be selected at the next Committee meeting. 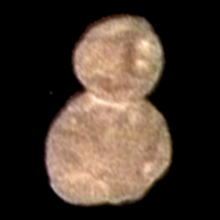 After the flyby of Pluto last year, a few days ago the New Horizon mission encountered the most distant object ever visited and returned images of Ultima Thule from the Kuiper belt. Thule is about 31 x 19 km and looks to be two objects that coalesced into a snowman shape.

See also: NASA’s Mission to Pluto and the Kuiper Belt.

Chang’e 4 landing on the far side of the Moon

On the 3rd, China’s 1.2 ton Chang’e 4 probe made the first landing on the far side of the moon. After touch down a 140kg rover was deployed. A satellite is being kept in a high orbit, around a theoretical Lagrangian point, relaying all the comms between Earth and the remotely controlled lunar vehicles Chang’4 Relay Satellite.

Part of the exploration programme will be to return samples to Earth by Chang’e 5 and Chang’e 6 Chinese Lunar Exploration Program.

The society has a number of telescopes available to members for as long as the member wishes to retain and keep them in good condition. One exception is the recent donation of an 11″ (28cm) Schmidt-Cassegrain. EAS is sharing the telescope with Cockermouth Astronomical Society where it will be available to EAS from late December to late June each year.

Dr Osborn gave a talk on his work on providing instrumentation for the world’s large, optical telescopes. 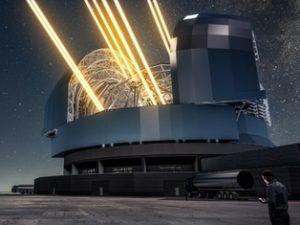 The marked rapid introduction of atmospheric distortion from a small to a large telescope was illustrated where the star images in the latter visibly oscillate. Astronomers and engineers are developing adaptive optics technology to remove such atmospheric bouncing and blurring so that scientists can see distant objects more clearly.

The disturbance to wavefronts from the target area is measured by using a laser to excite sodium atoms in the atmosphere to create an artificial star-like object. Fibre optic communication systems relay measurements of the distorted return signal to computer systems that control the telescope correction equipment. The AO system corrects the atmosphere distortion of the wavefronts from this artificial star in real time by flexing mirrors at a kilohertz rate to compensate for the atmospheric turbulence in the direction of viewing. Conformation and calibration of the laser systems are achieved at sites by a number of proved systems around the large telescope.

Q&A was informative. Included in that was the fact that in many parts of the world where large telescopes are located there is no need to warn aviation when launching 20 watts of laser light into the sky.