The society has been notified of two reflector telescopes for sale, one a 5″ Sky-Watcher with an equatorial drive for £60 the other a Meade on substantial Equatorial tripod for £300. Use the main menu EAS About Us/Contact page for details.

News this month started off with the latest on Betelgeuse, which is now starting to brighten according to photometry from the Association of Amateur Variable Star Observers (AAVSO). A substantial emission of dust could be responsible, based on the latest images from ESO’s Very Large Telescope (VLT). One very high-resolution image shows that Betelgeuse has changed in shape and has a darker patch compared to a year ago. Another shows a substantial dust cloud around the star emitting in infra-red. We’ll keep an eye on the situation in case anything else happens!

Betelgeuse light Curve to the beginning of March

Next, SpaceX and their Starlink satellite clusters. The Russian Academy of Sciences is taking the issue of their impact on astronomy to the United Nations. A report from the European Southern Observatory (ESO), examining the impact of many small satellites on ground-based optical astronomy, found a limited impact on deep imaging of very small areas of sky (apart from cost) and on the visual appearance of the night sky. However, the impact on wide-field surveys is likely to be significant. They have not yet addressed radio astronomy, which will be covered in another report.

The testing of the cryogenic liquid tanks for the SpaceX Starship SN01. During a cryogenic proof test using liquid nitrogen (a safer option than fuel or oxidant!), the lower liquid oxygen tank split causing the whole assembly to lift. On crash-landing, the upper liquid methane tank was propelled away. We await definitive information on the causes of this failure, but the fault could be related to welds joining the stainless steel bands and plates that form the tanks. When in service, the Starship (plus first stage) should be capable of sending payloads of over 100 tonnes (equivalent to over 3 fully-laden 40-foot containers) into low-Earth orbit. It is also intended for travel to the Moon and beyond

Earth has a New Moon

David brought to our attention a streaming service submitted by our amateur radio member, Clive Rowland: the Meteor Echoes project is now live and streaming on: meteors entering the atmosphere.

What’s in the Sky for March 2020 Ian Bradley EAS

For Constellations, Binocular objects, Deep Sky objects ISS passes visible this March see our What’s in the Sky this month by Ian.

Dr Pledger quickly introduced us to Wolf Rayet Stars (WR stars): massive, highly evolved and bright stars. Over 8 solar masses, over 1,000 times brighter than our sun, and extremely hot at 30,000K, compared to the sun at 6,000K, their effect on their physical environments can be extreme and lead to a number of theoretical anomalies and outstanding questions. 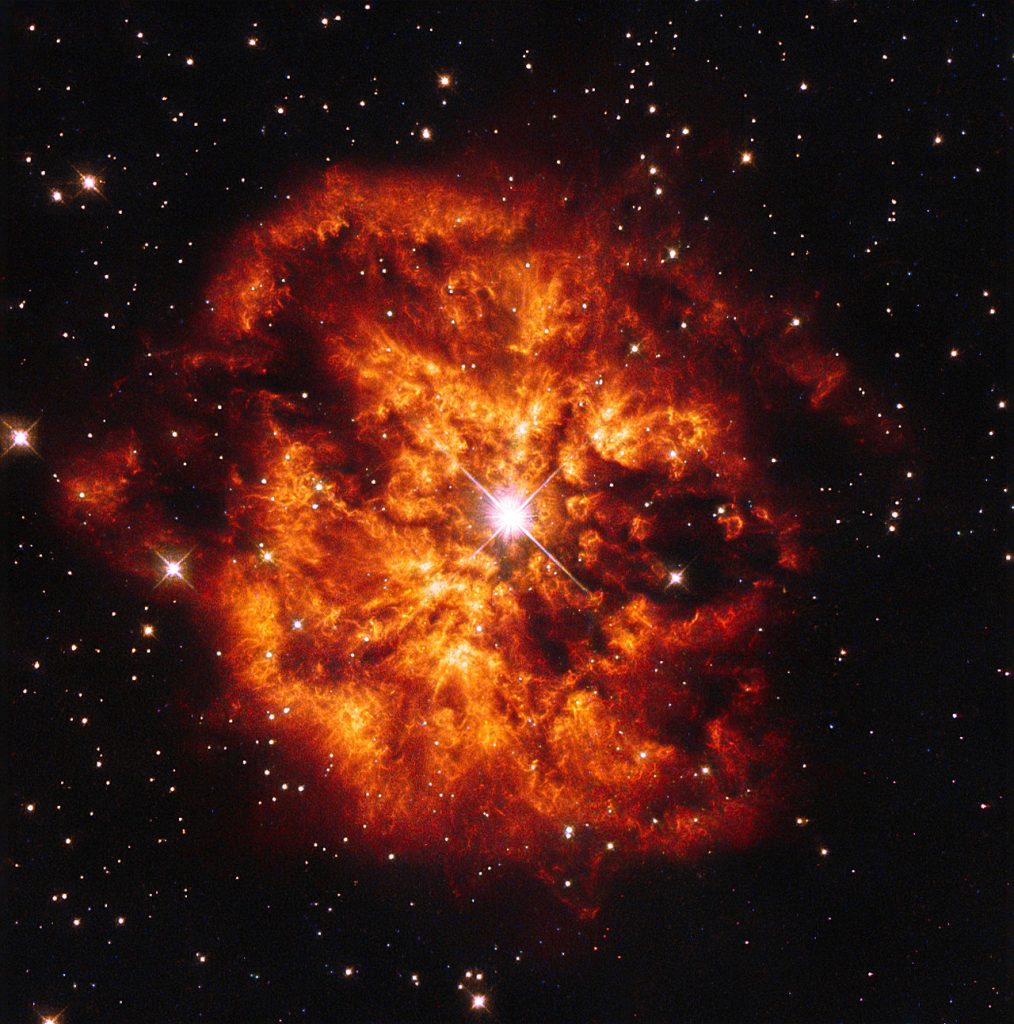 WR 124 and the nebula M1-67 in Sagittarius. Captured by the NASA/ESA Hubble Space Telescope.

First categorized in the mid-19C by the unusual broad emission-lines in their spectra that lack the element hydrogen (the fuel of most stars during their evolution). While many types of stars have mass enough to progress to the second element, helium, after burning all their hydrogen, WR stars feature not only helium but nitrogen, carbon, silicon, and even oxygen in their spectra.

Wolf–Rayet stars turn out to be a normal stage in the evolution of very massive stars. Initial categorization was into two types, WN and WC, depending on whether the spectrum was dominated by lines of nitrogen or carbon-oxygen respectively. Some show traces of hydrogen in their spectrum suspected of being either older Wolf–Rayet stars (WNL stars) with dust envelopes (WN stars) or, on the other hand, young massive stars evolving through a short life cycle. 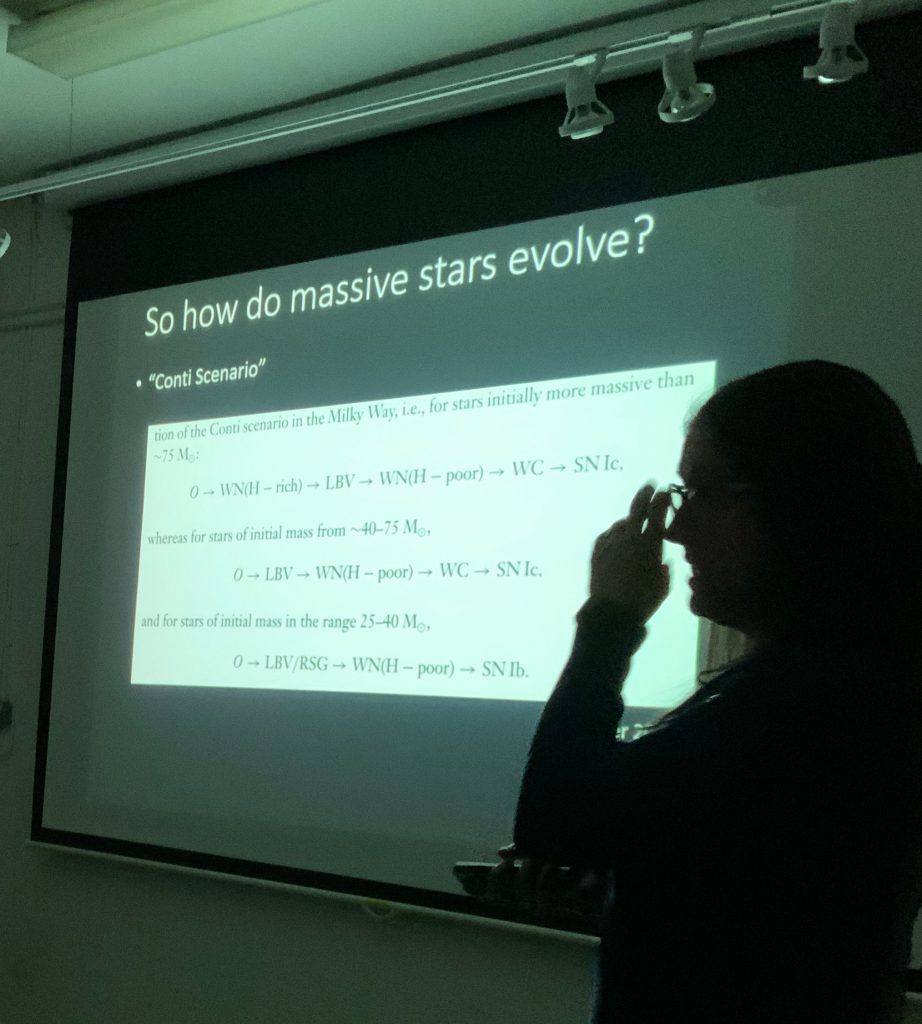 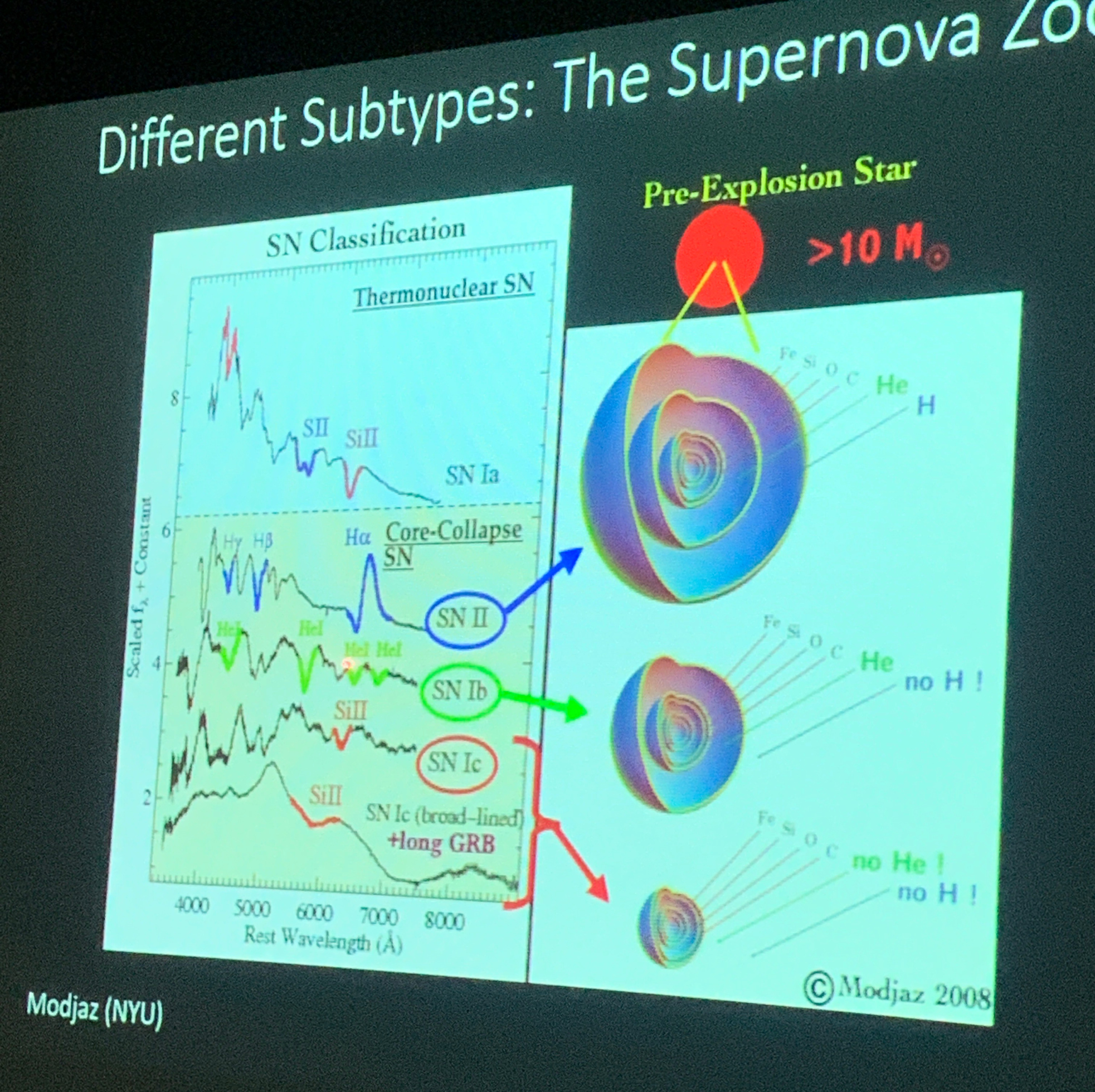 WR stars, with their high mass, are mooted as possible progenitors of supernovae, particularly the newly-discovered types Ib (lacking hydrogen) and 1c (lacking hydrogen and helium) supernovae. Nonetheless, no conclusive identification has yet been made of such a progenitor.

Before the final supernova explosion, high mass stars can survive the Red Supergiant stage, expelling their outer layers in a nova event, to retract and progress on to become WR stars – burning through the elements heavier than hydrogen and helium. The ejected high-temperature elements and interstellar dust may be energized by high radiation and stellar winds from the WR star to become a Wolf–Rayet nebula. 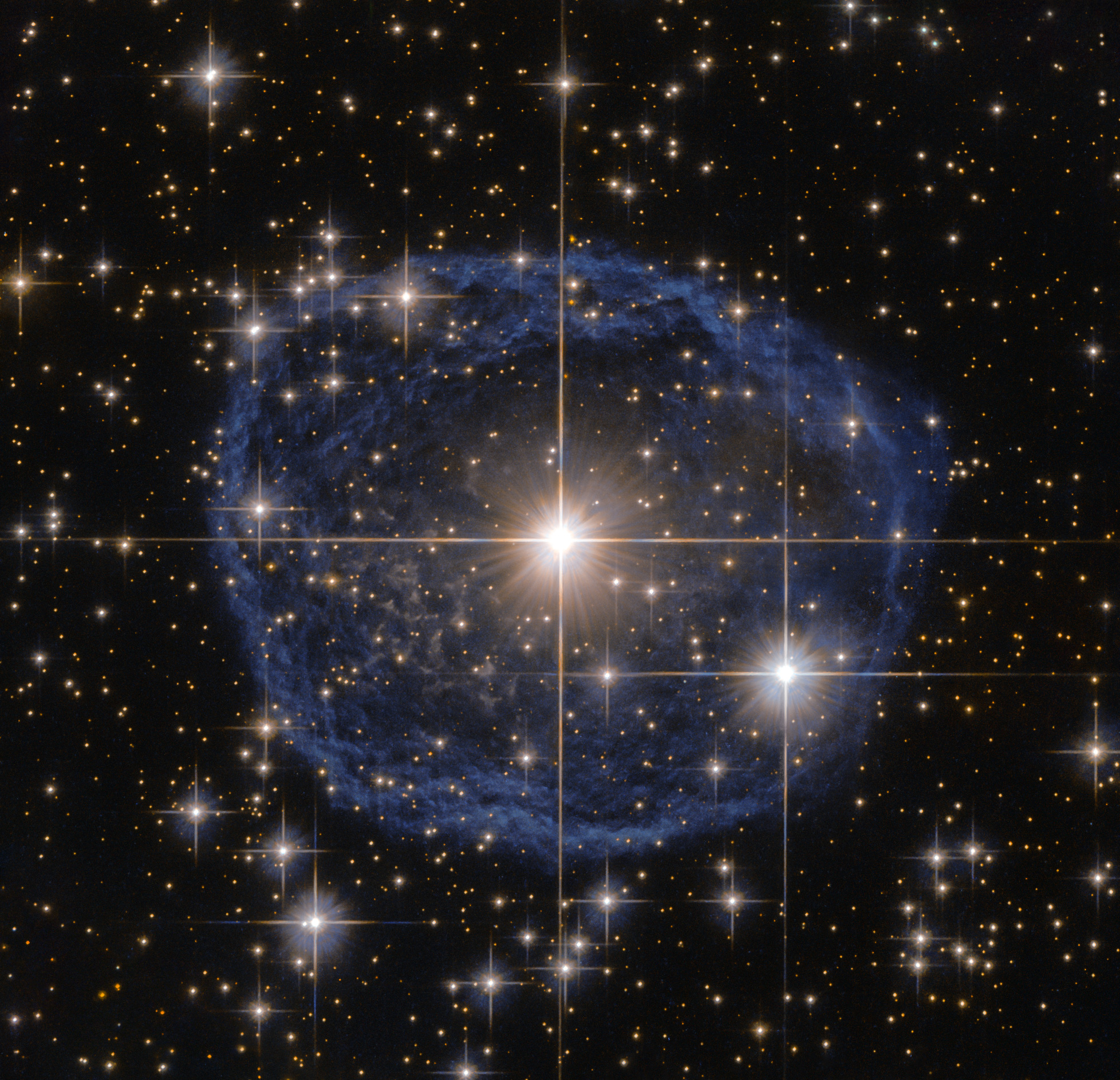 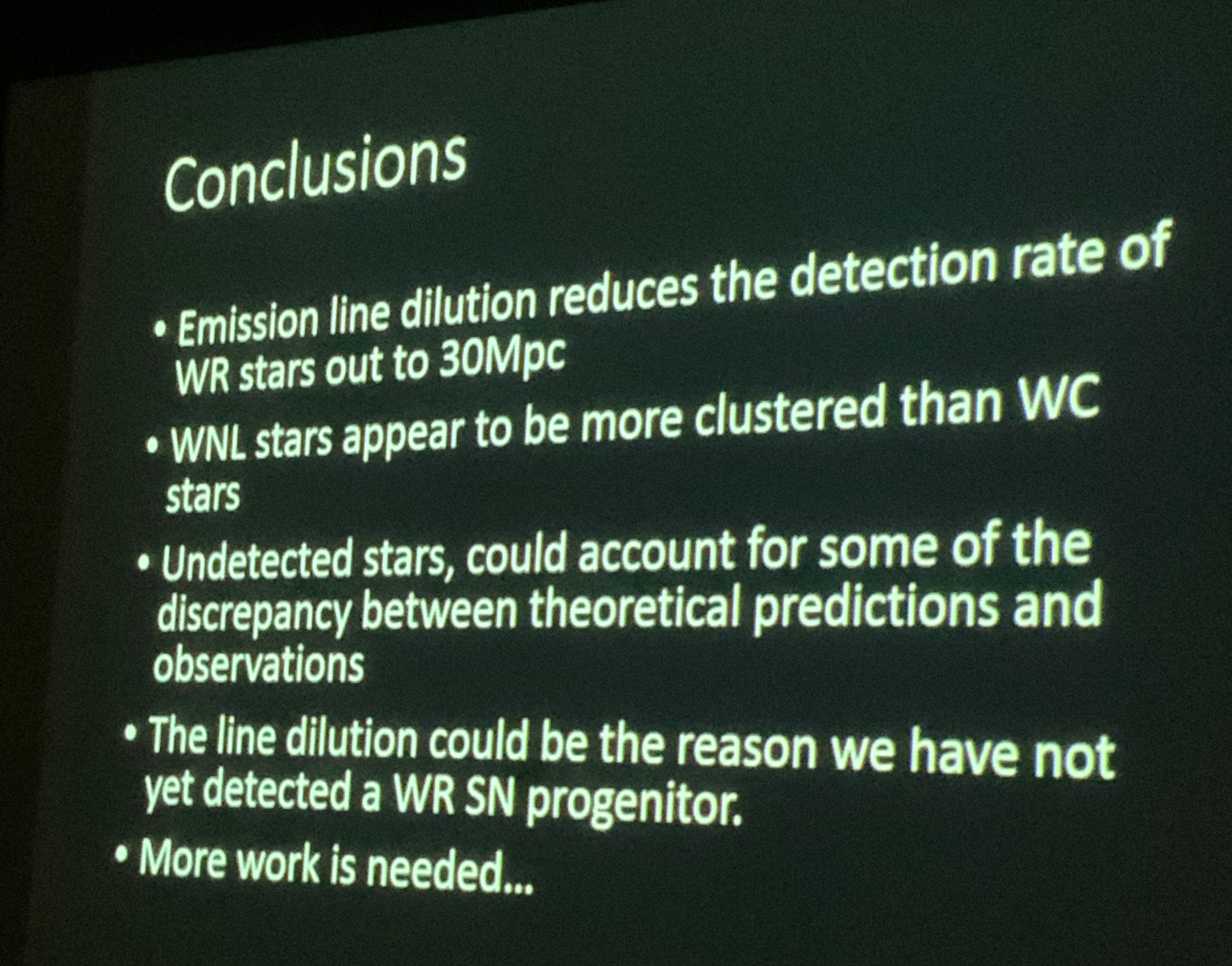