After sunset at around 7 pm the Moon, Saturn and Jupiter float in a line above the southern horizon. Inside the Summer Triangle, the constellation of Cygnus holds numerous interesting objects – see our Sky Notes for October 2019 for more detail and an October challenge. 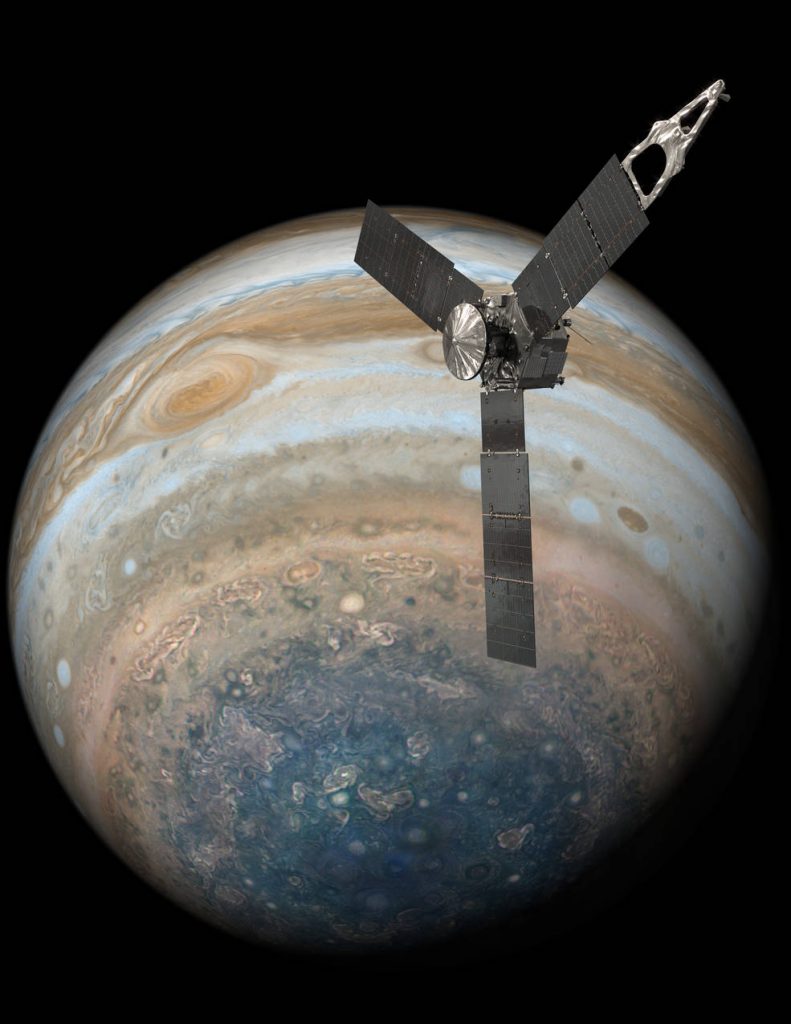 After abandoning a manoeuvre into a 14 day orbit, NASA decided to bring the perihelion of the 53 day orbit of Juno into closer proximity to Jupiter next month. After the recent failure of the main engine, for ten hours from the 30th September NASA burned the Juno thrusters to bring the craft closer when behind Jupiter. Thus, the solar-powered craft will spend less time out of the sun with its batteries at low temperatures.

12 billion light-years away, the illumination from galaxy SSA22 is being used to detect large-scale filaments of low-density hydrogen and Dark Matter between which galaxy formation is suspected to occur.

Planet 9 or a black hole

A dozen Trans-Neptunian Objects have all been determined to have perihelions all at the same location. So could it be that a goliath planet, some 5 to 15 times the mass of the Earth is hiding far beyond Pluto, and shepherding these TNO’s into their unusual orbit? In a paper posted on 24 th September, a study claims that rather than a planet, the culprit is a primordial black hole. These are predicted to have formed within the first few fractions of a second after the big bang, but their existence has never been confirmed.

The Optical Gravitational Lensing Experiment (OGLE) is looking for gravitational microlensing events. If the alignment is perfect, a heavy foreground object acts as a lens, distorting and amplifying the light from the object behind it. After 5 years’ of observations, researchers uncovered six strange microlensing events that seem to have occurred when objects roughly 0.5 to 20 times the Earth’s mass acted as a gravitational lens.

“Capture of a free-floating planet is the leading explanation for the origin of Planet 9. We show that the probability of capturing a primordial black hole instead is comparable”

Such a captured black hole roaming the outer solar system would influence the orbits of TNO’s in exactly the same way as Planet 9. 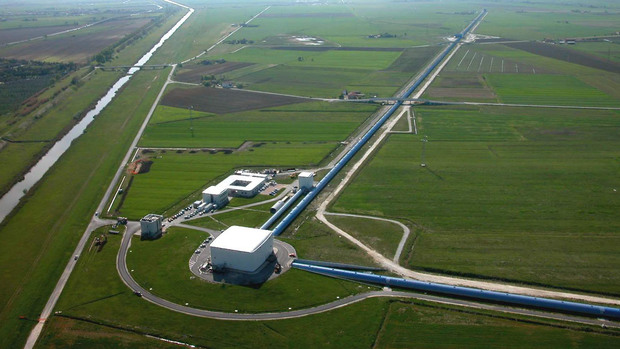 Our current way of detecting a gravitational wave is by detecting changes in length caused by the wave stressing space-time as it passes by. Dr Bowler warned of likening the electromagnetic waves in astronomy with gravitational waves in space-time – gravitational waves are more like pressures waves, compressions of space-time. Nonetheless, the classic Michelson–Morley interferometer configuration put us on familiar ground as the basis of a LIGO layout of two mirrors at right-angles reflecting a spilt beam back to the source. The interference pattern shows any change in the distance travelled in the two directions. The interferometer arms are each 4km long but with the laser beam bouncing many times along each arm before the two beams interfere, the effective length is nearer 1200km. The system is so effective, it can detect changes in length of 10-19m, that is one 10,000th of the diameter of a proton! The technical design challenge is reducing the background noise – people, vehicles, earthquakes… – to allow such tiny changes to be seen.

Over 30 gravitational wave events have now been detected – they have to be seen by both current LIGO detectors Hanford and Livingston. All but one are believed to be created by the merger of two black holes in the final fraction of a second. The rapidly changing orbital situation before they coalesce produces a rapidly fluctuating wave with increasing frequency and amplitude. This produces the detected chirp lasting about 0.2 second. The physics of two such massive objects just before they spin into their combined event horizon is unknown and the subject of research. The other event is a much longer ‘chirp’ event, duration ~100 seconds, is believed to be the merger of two neutron stars. A burst of gamma rays was detected 1.7 seconds later from the resulting ‘kilonova’ enabling precise positional information. Additional gravitational wave detectors are necessary to provide better positional information on black-hole mergers – currently only about 10 degrees – and many are now in construction.