Welcome to the January newsletter.

Unfortunately, covid regulations are still in force so our meetings have to continue by Zoom. The newsletters will continue and it would be nice to get some contributions from you. David and Richard have worked hard to provide news updates. Moira has been providing regular ‘Constellations of the Month’. So many thanks to all of you.

Our next meeting, the Annual General Meeting will be later this week, so please join in and let us hear your views. That, hopefully short, discussion and votes, will be followed by the concluding talk from Lionel Wilson on the geology of our Solar System; having covered both the Moon and Mars in previous talks, Lionel will this time concentrate on Venus, what when I was nowt but a lad, was referred to as Earth’s twin. We’ve come a long way since then with multiple spacecraft visits.

The skies in December didn’t play fair again giving only fleeting glimpses of the conjunction of Jupiter and Saturn. The best night round here was possibly the 12th but there was a later chance at the end of the month. I spent a rather cold early evening dodging hail and heavy rain at Helsington on the 20th but I probably left home just a few minutes too late – story of my life? I hope some of you got better views.

Ian Bradley, on behalf of the EAS committee

Astronomy Links We’ve circulated this by email before

There was a notable success for Starship SN8 early in December. It was scheduled for a flight to about 15km altitude, a controlled descent in a horizontal position, a flip to vertical and a safe landing. Well, most of it happened on 9/12/20, after a previous attempt that was aborted 1 second before launch.

SN8 was fitted with three raptor engines for this exercise. Preparations for launch suffered one pause at about 2 minutes before launch, but after that all went to plan and the launch went ahead! Here are two different views of SN8 shortly before launch:

SN8 just prior to launch on 9/12/20. Left: A view of the three Raptor engines during cryogenic cooldown, just before
launch (credit: SpaceX). Right: Venting place towards the end of fuel tank filling. (Credit: Labpadre).

The flight itself was spectacular, and you can see it here (~8 min long)

All was going very well, and it was particularly impressive to see the Raptor engines being adjusted to control orientation. Also impressive was the gradual transition to horizontal, the “glide” down and the final flip to vertical using two of the engines. At this point there is no impression of speed towards the ground, until the ground came into view – then, it was apparent that the craft wasn’t vertical and was coming in too fast. The result was a classic boiling liquid expanding vapour explosion (BLEVE, pronounced “blevy”) as the pressurised fuel was released suddenly, ignited and formed the classic fireball.

In spite of the dramatic end, the flight was a success and many important principles for these starships were tested. The cause of the crash has been discussed as low fuel tank pressures, which can be corrected in future starships (maybe by vaporising a bit more stored fuel to keep the pressure up).

Next up is SN9, which suffered a bit of a mishap during construction when it collapsed in the assembly bay a day or so after the SN8 launch…. 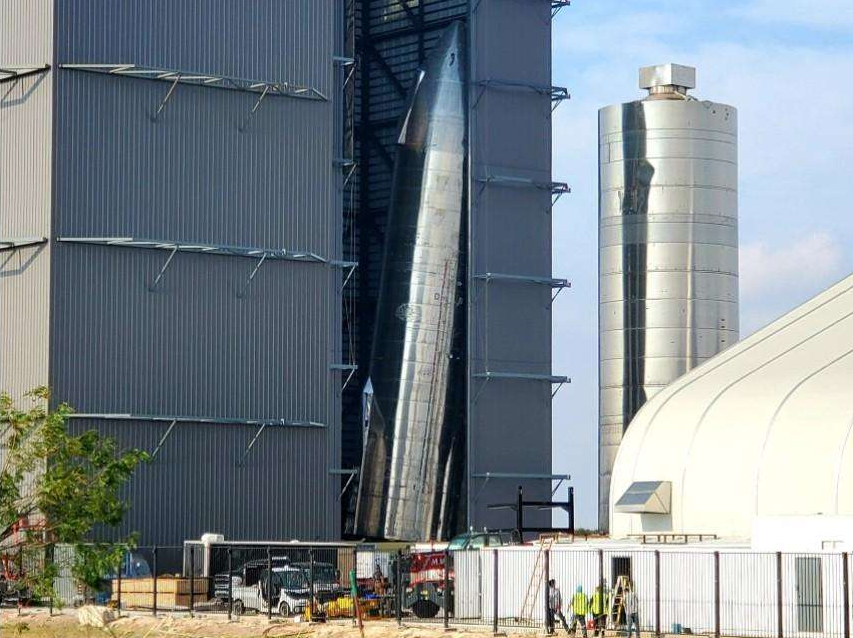 However, a quick look at a live camera today shows SN9 in place on a launch pad at Boca Chica: 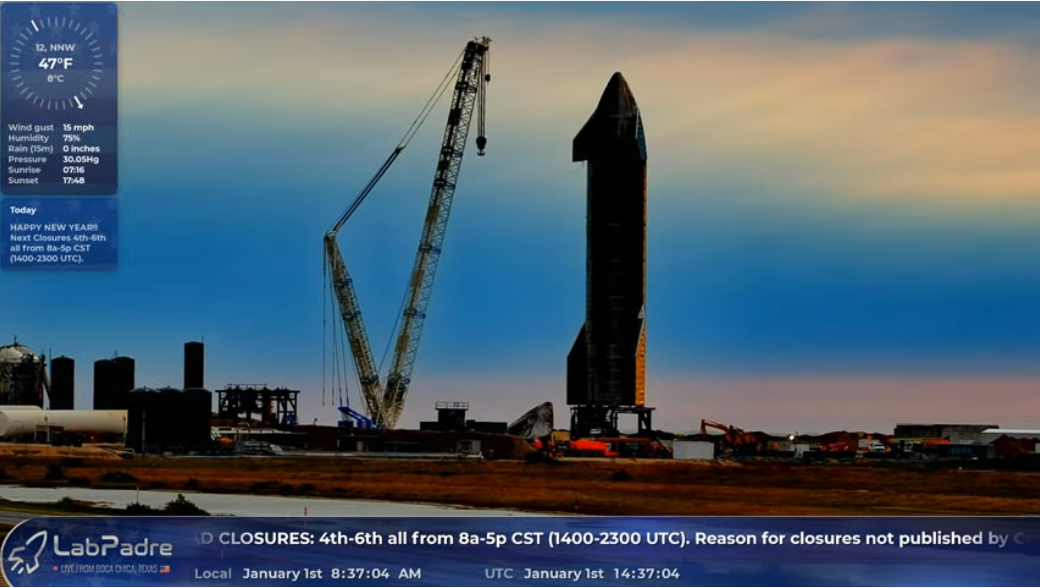 There will be the usual pressure testing of the fuel tanks (warm and cold) and test firing of the Raptor engines, before another flight hopefully in a few weeks. Looking forward to it!

Back in November 2018 we had a talk about the Hyabusa-2 spacecraft, which subsequently managed a successful rendezvous with an asteroid (Ryugu) and grabbed samples of material from its surface and below for return to Earth. During December there was some excellent news about this mission – the samples were successfully returned to Earth as planned and have been retrieved! The sample return module created a nice fireball effect in the sky and then landed with a parachute near Woomera in South Australia… 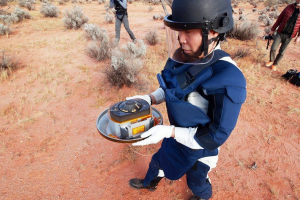 Anyone who has seen the excellent 1971 film The Andromeda Strain might have been a bit worried at this point, but all went very well. Later, the capsule was found to contain material from the asteroid and a gas sample: 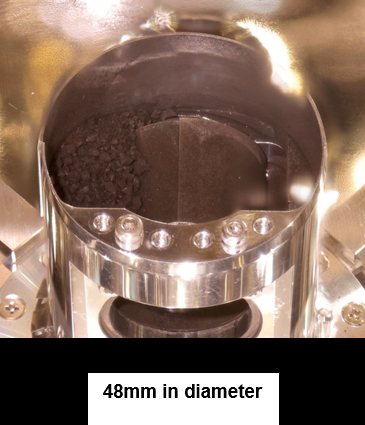 Analysis of this material will provide information on the material around during the earliest days of the Solar system, and will help to improve understanding of how our system formed. Watch out for the science papers!

Another successful sample grab from offworld was achieved by the Chinese Lunar spacecraft Chang’e 5, which deployed a lander to the Moon’s surface, grabbed about 1.7 kg of moon material, sent a return vehicle (ascender) back to the main spacecraft, and on 16/12/20 got the sample safely back to Earth with a landing in Inner Mongolia. 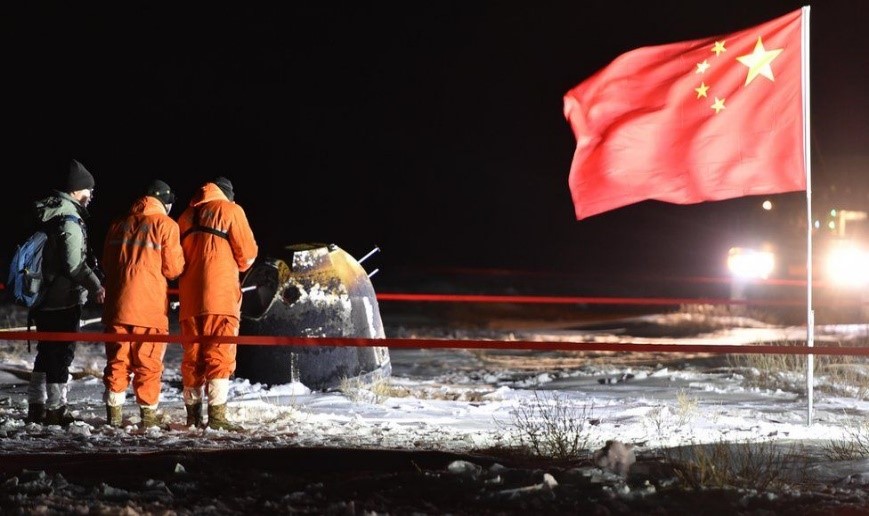 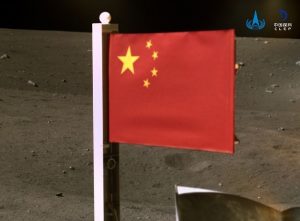 This makes China the third country to return material from the Moon after the USA (Apollo) and Russia (Luna 24, 1976). Robotic missions may lack some of the glamour of crewed space missions, but they certainly get the job done!

While SpaceX are forging ahead with flight testing of their starships, NASA are busy developing their own new Space Launch System (SLS), intended to get people back to the Moon in the relatively near future. During December, a newly-built core stage of the rocket was filled with cryogenic liquid, maintained under operational conditions for a time and then successfully drained. This sets up an engine firing test involving all four of the rocket’s RS25 engines which sit at the base of this core. All this is taking place at NASA’s Stennis Space Centre, Bay St. Louis, Mississippi.

The plan is for a proper launch in late 2021 to send NASA’s Orion capsule (uncrewed at this stage) around the Moon and back, in preparation for a full crewed mission in 2024. When in operation, SLS will be capable of delivering about 27 tonnes of payload to Lunar orbit, which for comparison is not far off a 40ft shipping container filled to maximum weight (30.48 tonnes). 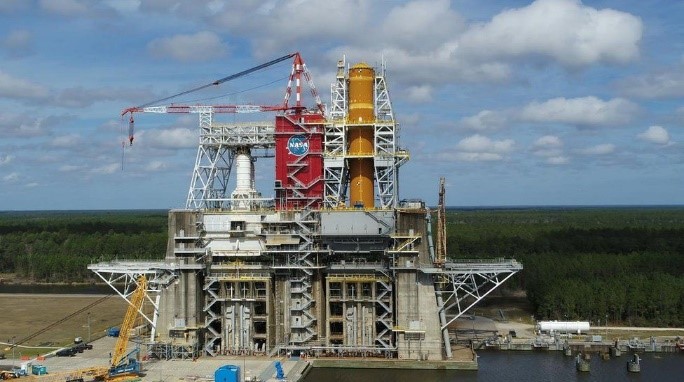 NASA’s SLS core stage on the B2 test stand at Stennis Space Centre, previously used to test the engines for Saturn 5
rockets. 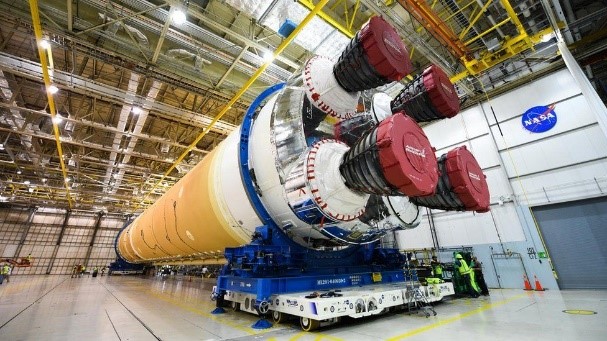 SLS core stage with four RS-25 engines, prior to delivery to Stennis for testing.

A Signal from Proxima Centauri?

Back in April – May 2019, the 64-metre Parkes radio observatory in Australia was being used to observe the red dwarf star Proxima Centauri, our nearest stellar neighbour. One of the two known exoplanets around this star probably has a mass similar to Earth’s, and happens to orbit within the “habitable zone” around the star where liquid water could exist on its surface.

Although the main objective of the observations was to study the powerful stellar flares associated with red dwarf stars, the “Breakthrough Listen” project also used the data to look for signals that might indicate intelligent life. And in October 2020, a signal was detected at a frequency of 982 MHz (that’s 0.305 m wavelength) apparently coming from the region around Proxima Centauri (16 arcminute circle on the sky, or about 1⁄2 the diameter of the full Moon).

There’s work going on at the moment to try to establish whether the signal has a human origin, and hopefully some papers will get published on this. If nothing else, it will help to refine the search criteria for signals of interest to SETI (Search for Extraterrestrial Intelligence) projects and prevent false positive detections. On the other hand, if the signal is really from an extraterrestrial intelligence, we might get the chance to watch their re-runs of soap operas instead of ours (as well as being a transformative moment for our species of course). 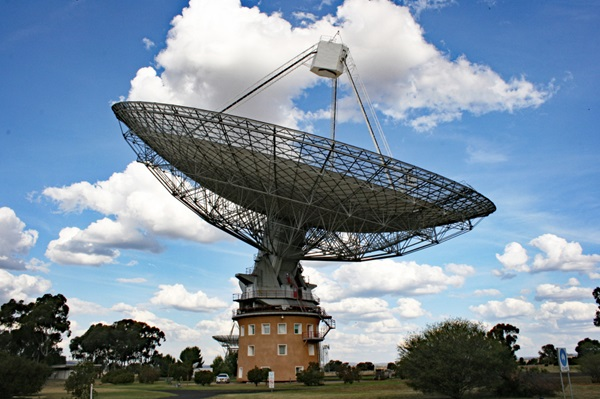 A Walk in the Dark – Moira Greenhalgh

We have all at some time looked up after dusk as the stars popped into view in turn, magnitude one first of all, followed by the less bright stars. It is interesting to see this in reverse.

I take my exercise early in the morning so as to avoid the children gathering to await the school buses. Alarm goes off at 6.25 am and I am out of the house by 6.45 with torch in hand and trustee umbrella. It is still pitch dark. However there have been mornings when it wasn’t actually raining, when the sky was clear.

I step from my gate, and up to my right (NNW-ish) is my favourite star, Capella, not particularly spectacular but reliably always present. I say “good morning” to Capella. Was talking to a friend on the phone last evening and she starts her day with a “good morning Jesus”. Each to our own, if it makes us happy. Walking along the front at Arnside, I see to the west two bright-ish stars lying almost horizontal over the hills towards Grange. They are Castor and Pollux, the twins in Gemini. They form a gentle curve made of Capella, Castor, Pollux and Procyon.

My walk bears round to the left, now facing south-ish, and in front are some fainter stars. I study for a while and can then make out a backward question mark. This is the head and front paws of Leo, and yes now I can see the whole of his body. Further round the circular walk (maybe just east of south) is a bright redish star all on its own. How do I identify it? I hunt around and above it are just discernible 3 stars in an arc, the handle of the Plough. I draw an imaginary line round this arc, and continuing the arc through space I get to my bright star. It is Arcturus in the constellation of Boӧtes. From Arcturus I continue an imaginary straight line (or spike) to a just visible Spica, low in the sky. Something in me says this is all wrong as Boӧtes and Leo are “summer” constellations, I should not be seeing them now.

Actually, I am not seeing them now, time has gone on and the sky is getting lighter though I still need my torch. The stars of Leo have faded out of view as has the handle of the Plough.

However, continuing the walk, facing NE I get to the highlight, the beautiful Venus, shining brightly through the now colouring sky. I stand still, and turn a complete circle. Arcturus is still there, and so is Capella, but the rest have all faded. On the home leg, both these stars gradually reduce to pinpricks and by 7.45 have gone.

See our Sky Notes for January 2021 by Ian Bradley

Pictures of the Jupiter -Saturn conjunction

Looks like Ted and I were a few hundred metres apart at Helsington! 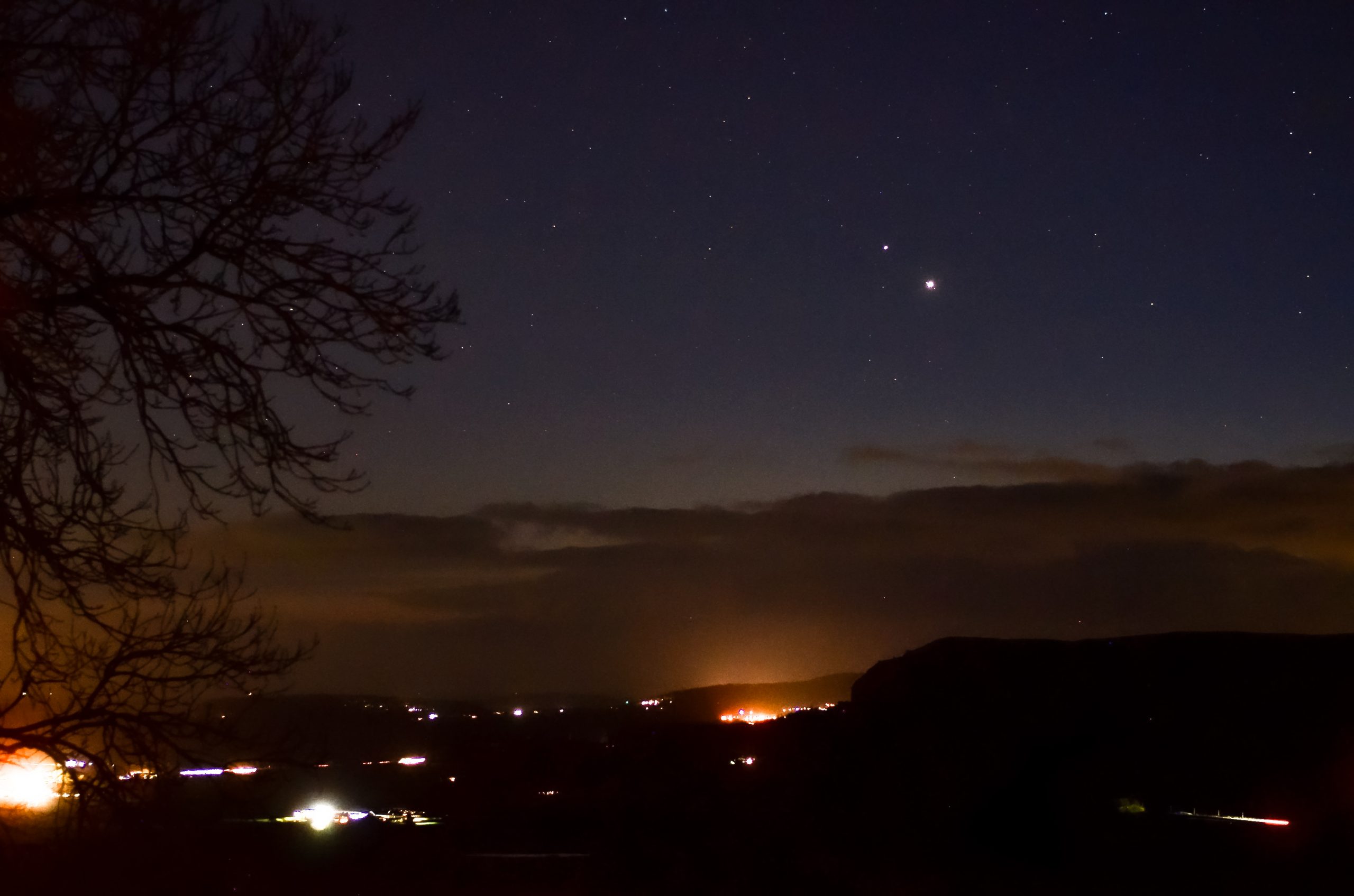 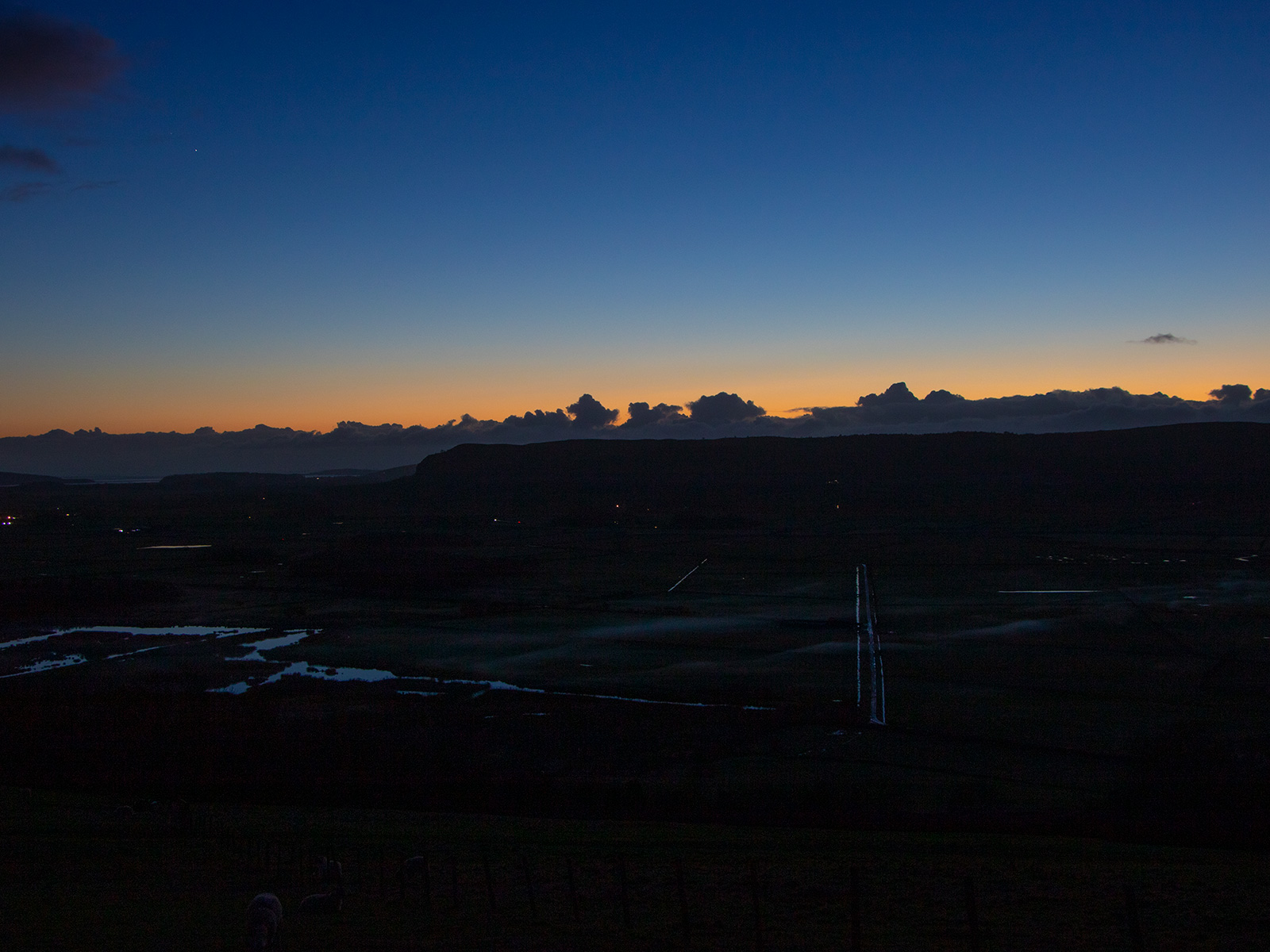 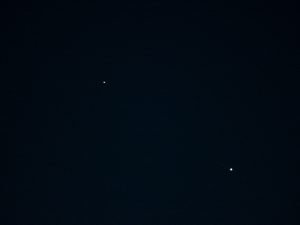 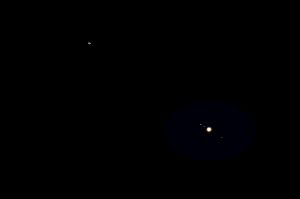 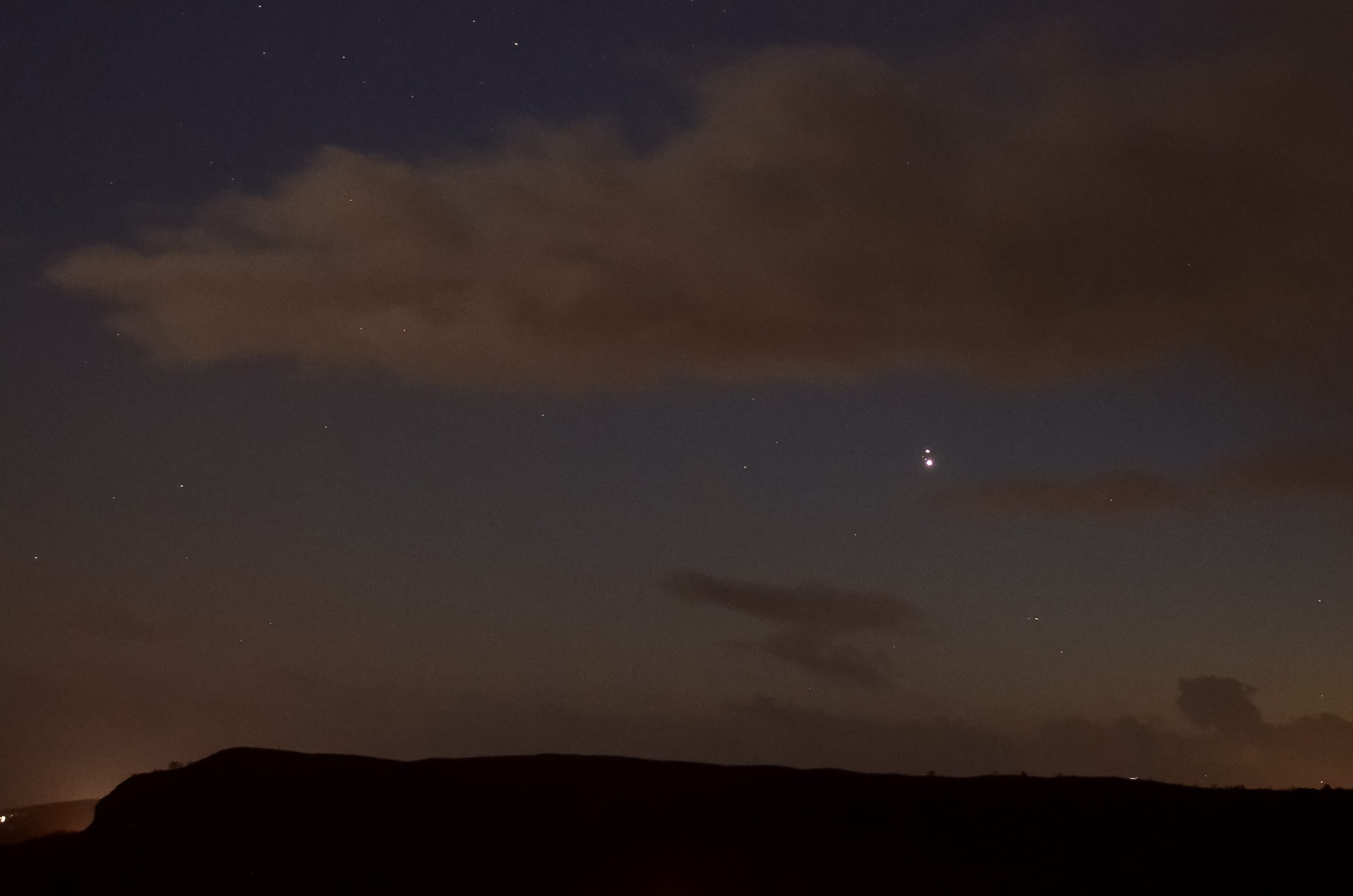 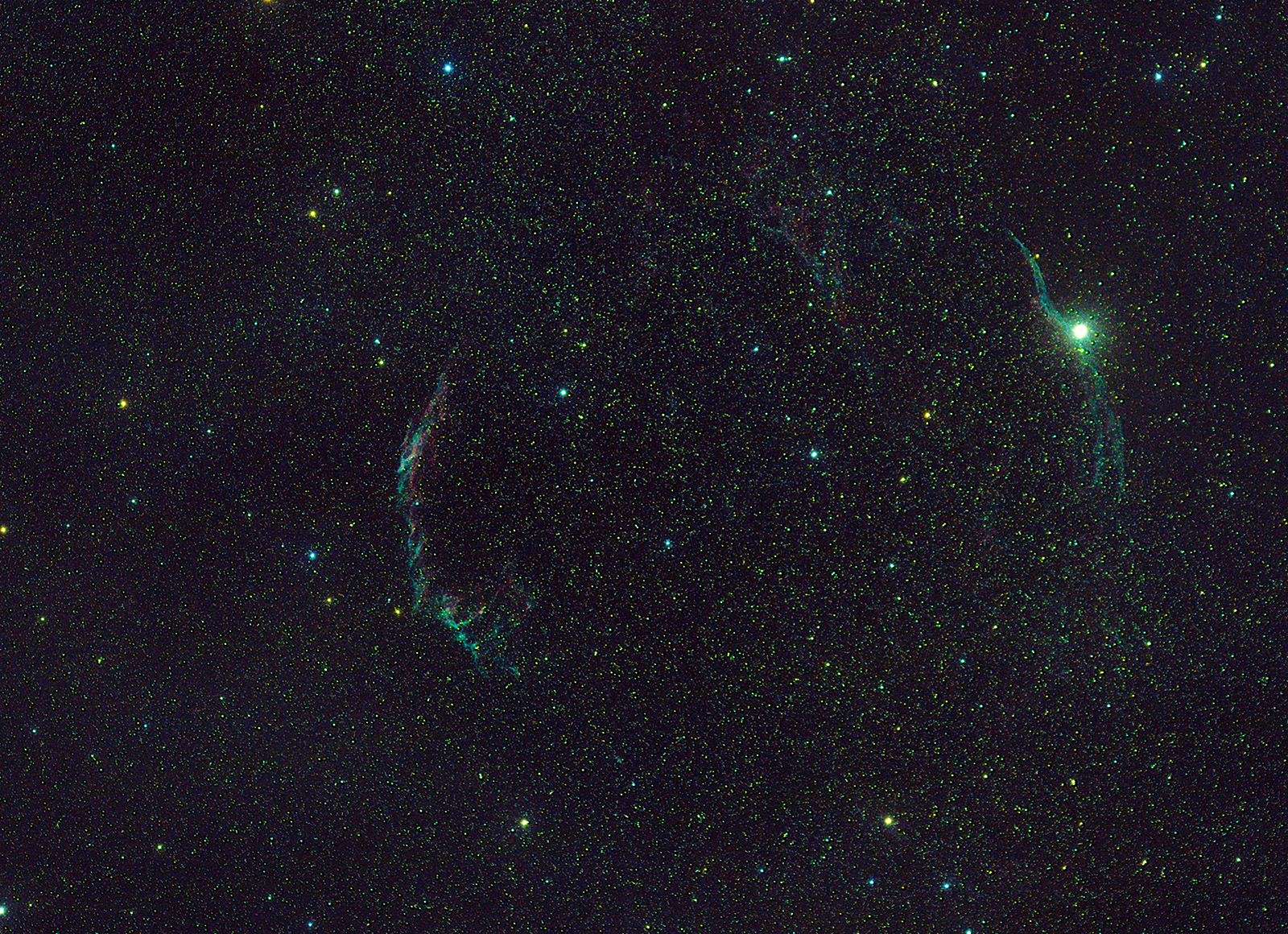 e Cygnus Loop, a supernova remnant in Cygnus. The right-hand obvious part goes by the names The Veil Nebula and the
Witches Broom Nebula. Taken with a Canon EOS750D and a Sigma 150-600mm telephoto lens @ 200mm. Still a work in progress.
Credit: Ian Bradley 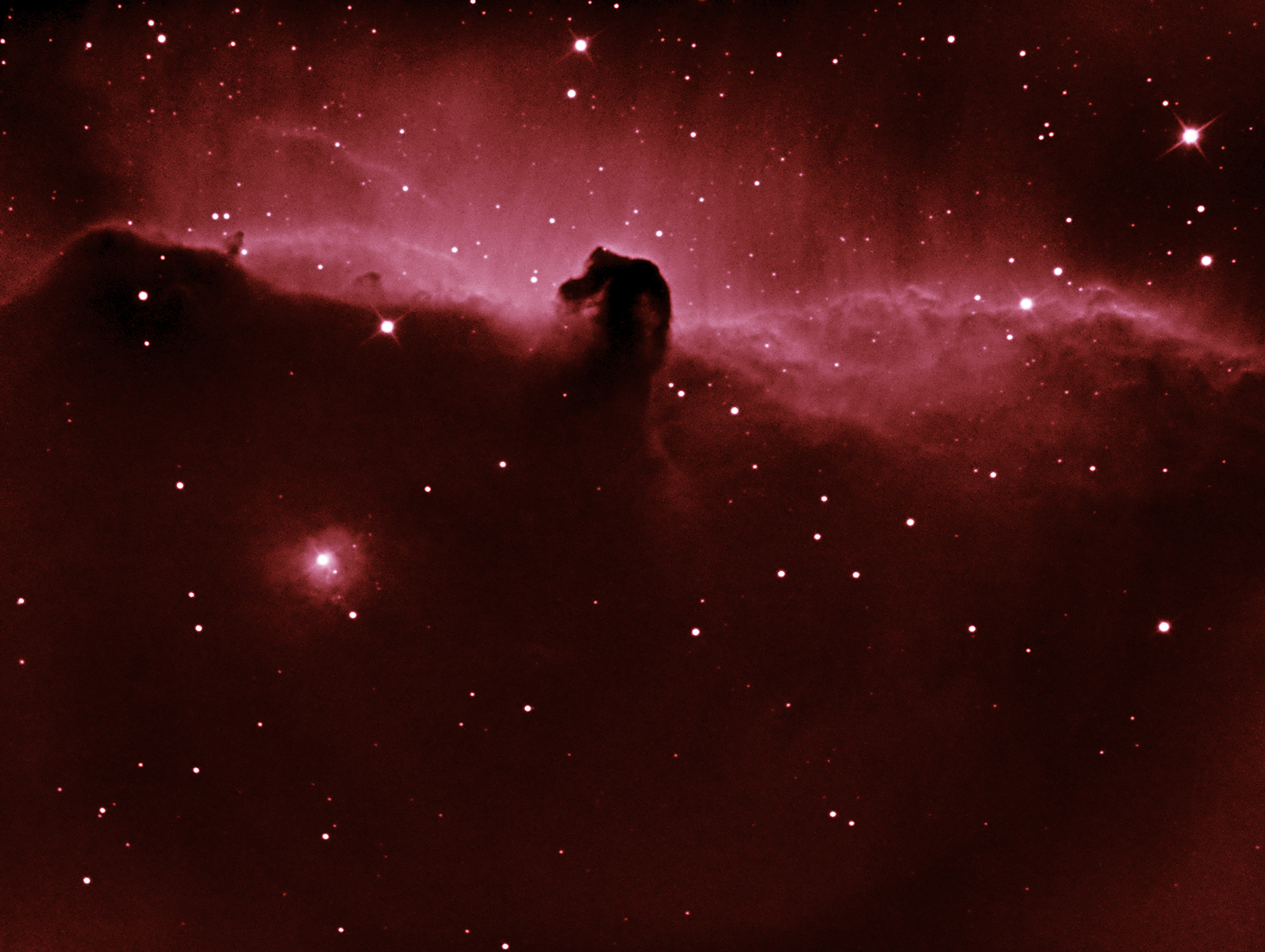 The famous Horsehead Nebula, Barnard 33, in Orion imaged in narrowband Hα at near full moon. Nice to see the streaming
caused by radiation pressure from the exciting star out of shot above. Credit: Ian Bradley