Welcome to the October newsletter.

A pdf version of this member’s newsletter which includes an additional section on EAS business and developments is issued to all current members.

See also our monthly Sky Notes for objects observable in the sky from Kendal during this month.

It was good to ‘see’ people and chat at our first and, I believe, successful virtual meeting last month. We had an excellent tour of Graham Cornford’s observatory and a talk by Richard Rae on the Chinese Mars exploration missions. Some people stayed online at the end and had a chat which was nice. By the time you are reading this, you will either have received an email to give you the connection details for a talk by Sue Bowler on October 1st. I hope you can attend. We are also looking towards virtual meetings in November and December, the latter with Graham Fell’s legendary Christmas astronomy quiz. No pressure Graham!

With darkness now coming at a sensible hour, there is plenty out there to see. I’ve indicated some objects in the sky notes, but no doubt I’ve missed a few things! Winter is definitely near. I woke up very early this morning and was surprised to have a clear sky. On a brief wander out into my yard, I was greeted by a magnificent sight – Orion standing proud with Sirius twinkling on the horizon with the vivid orange Mars in the west and bright blue-white Venus in the east. Definitely a sight worth seeing.

It would be good to get a few more articles or photographs from members – please! – to add to the newsletter. Thanks to Moira, David & Richard for their contributions.

We haven’t mentioned the discovery of phosphine in the atmosphere of Venus as a possible biomarker in this newsletter, because of the extensive media coverage – you probably know about it already. If you want more information, the most recent episode of The Sky at Night has a lot of detail about it and it should be available on BBC iPlayer. Here are a few other items of interest for this month…

You may recall that a Japanese spacecraft Hyabusa-2 managed to touch down on an asteroid (Ryugu), grabbed some samples and is now heading back to Earth for arrival on 6/12/20. It is now the turn of a NASA spacecraft, OSIRIS-REx, to touch down on another asteroid, Bennu. The original touch-and-go (TAG) sampling of Bennu was scheduled for August 2020, but it is now scheduled for 20/10/20. The spacecraft has already been guided close to the surface in two practice runs and it mapped the asteroid in great detail, so there is a good chance that the chosen Nightingale landing site will work. Pressurised nitrogen will be used to “stir up” the surface and allow a target mass of 60g of material to be collected for return to Earth in 2023.

The target asteroid Bennu is somewhat different to Ryugu – it is just over half the diameter of Ryugu, and has a different composition. Both asteroids can provide valuable information about the materials involved in the formation of the Solar System and possibly in the development of life on Earth. Both NASA and JAXA (Japan Aerospace Exploration Agency) are collaborating on the research of these asteroids and are sharing methods and data.

For more details and a video showing what is planned, see NASA’s OSIRIS-REx

For a detailed summary of the spacecraft, what’s onboard and its mission, see OSIRIS-REx in depth. 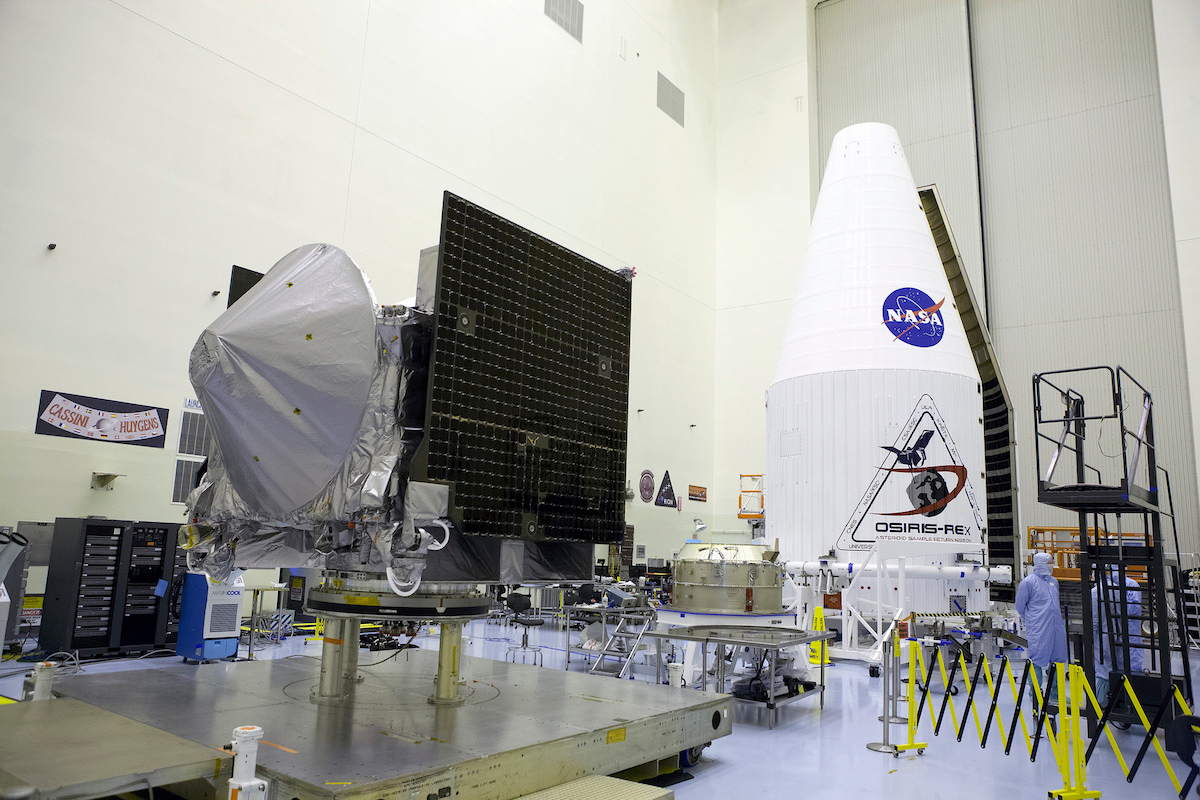 OSIRIS-REx and its fairing for launch (credit: NASA/Glenn Benson)

Not much to report since SpaceX’s last “hop” to 500 ft, but plans are afoot for more test flights. Blue Origin were scheduled to test their latest New Shepard rocket on 24/9/20 with a new landing system for NASA, but this was scrubbed and no new date has been announced. The system has already been tested and flown to the edge of space, and one of its uses will be for space tourism to allow people to experience a few minutes in microgravity. It has also carried instruments and commercial payloads on suborbital spaceflights. For a video of the 8th autonomous test flight in April 2018 see here, although please don’t read the comments unless you like the “Carry On” films! 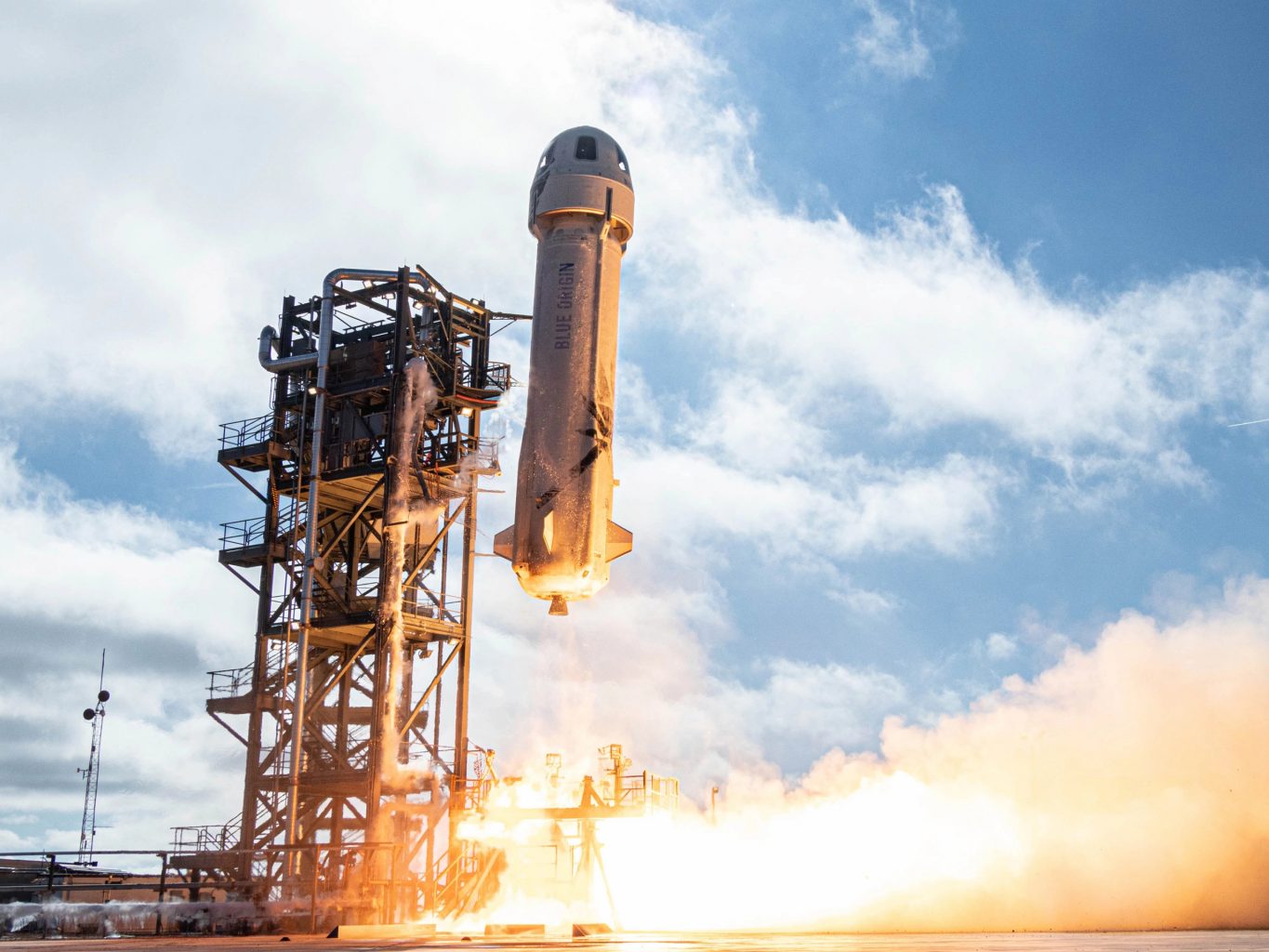 As for SpaceX, they are currently preparing Starship SN8 for cryogenic testing, static engine firing and a launch. This time, there are fins… 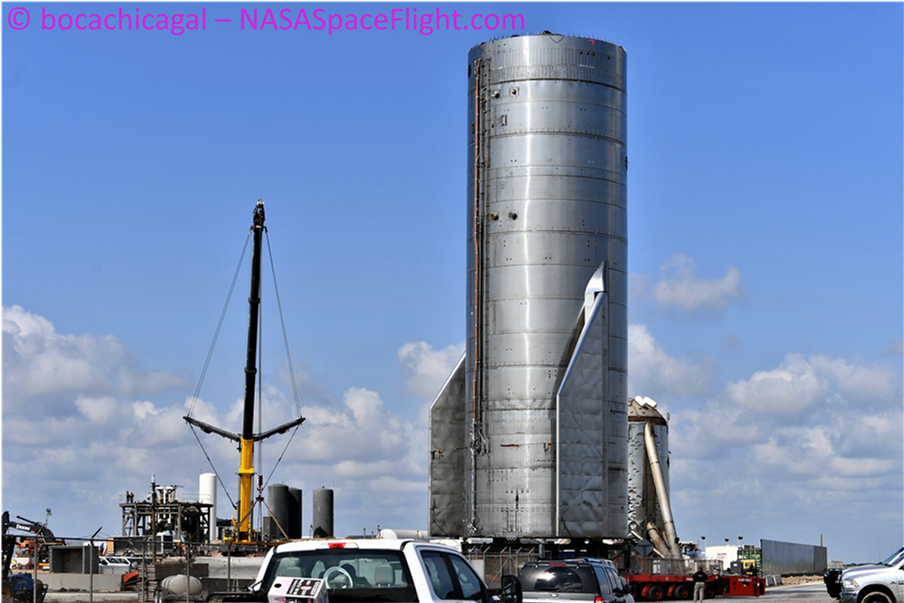 Thanks to all the ground and space based projects to spot exoplanets in our galaxy, we know of over 4,200 of them (confirmed as present by two or more methods). However, there’s no reason why our patch of space should be unique. This is emphasised by a possible discovery of an exoplanet in another galaxy, M51 (the Whirlpool Galaxy – anyone photographed it?). 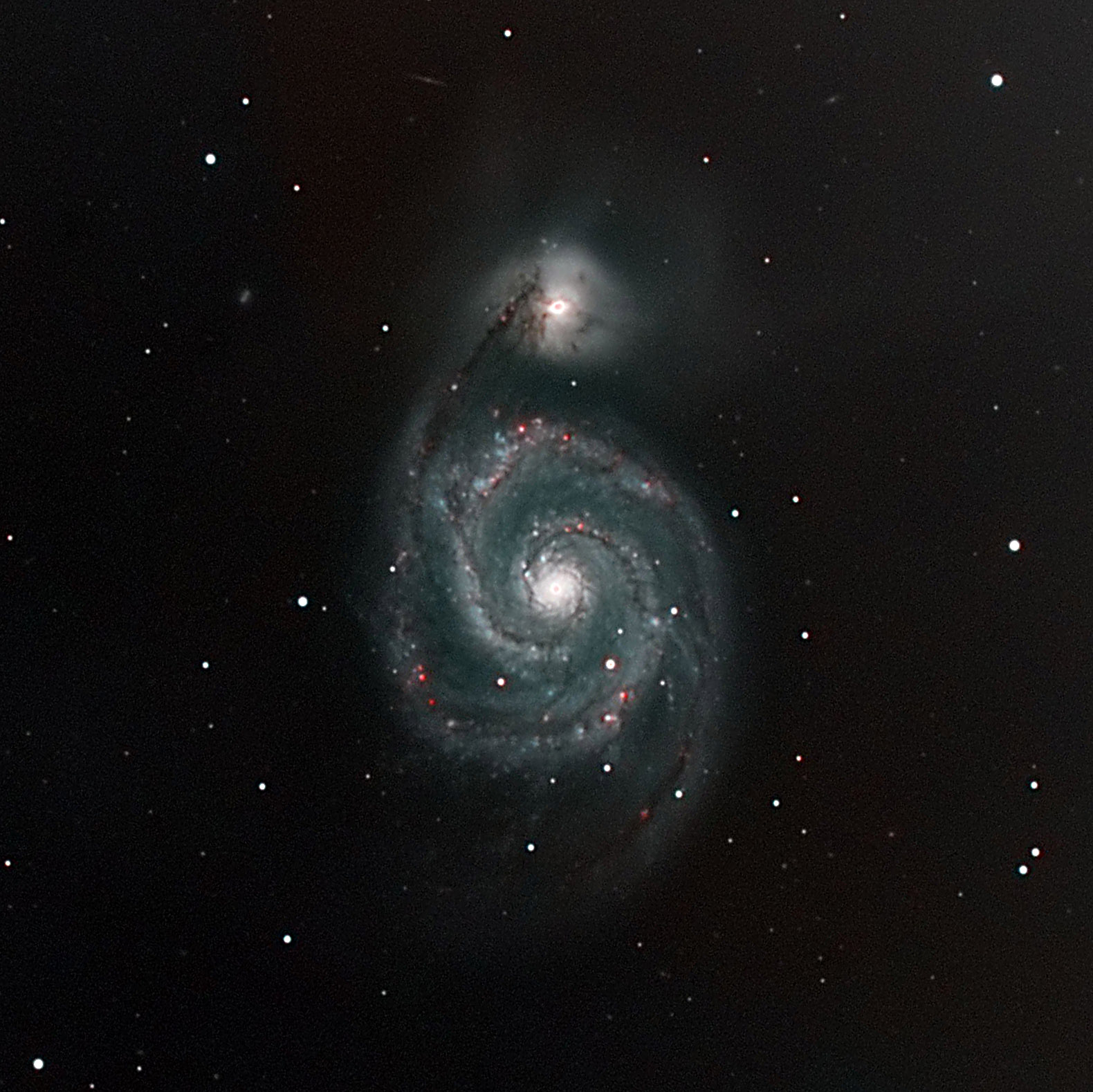 This used a variation of the well-known transit method for detecting exoplanets, but in this case the exoplanet went in front of a bright X-ray source, instead of a star, back in 2012 and caused a dip in the X-ray brightness of the source. The exoplanet, catchily named M51-ULS-1b, is thought to be a little smaller than Saturn and is orbiting a binary stellar system consisting of a massive star and either a neutron star or a black hole. Accretion of matter from the star onto the compact object generates the X-rays. Because the X-ray source is so compact, the exoplanet completely blocked it for about 20 – 30 minutes, with a total time for the transit of about 3 hours. This is in stark contrast to the transit of exoplanets across whole stars, which only produce dips in optical brightness of about 1% or less.

The preprint paper (Di Stefano et al. 2020) with lots of information about the observations, the analysis (including the elimination of possibilities for such dimming other than exoplanets) and the implications of the findings can be found here: https://arxiv.org/pdf/2009.08987.pdf. The technique could open the door to the discovery of more such exoplanets in other galaxies hidden within archive images, so let’s see who takes up the challenge!

The region where M51-ULS-1b was detected in M51, the Whirlpool Galaxy. Left: an X-ray image from NASA’s Chandra X-ray Observatory showing the bright source within the galaxy. Right: an optical image from the Hubble Space Telescope of the boxed area on the left, showing the source at the edge of a star cluster within the galaxy (di Stefano et al. 2020). 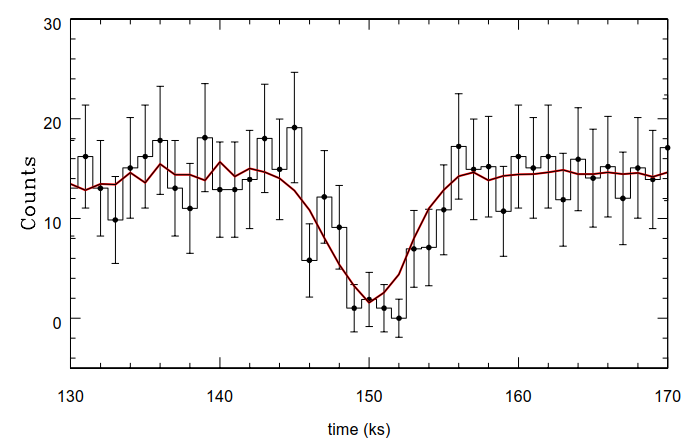 The dip in X-ray signal when the exoplanet is thought to have passed in front of the bright X-ray source (di Stefano et al. 2020)

It’s always great in science articles to make a fantastic claim that makes the headlines on the news. However, it is the dedicated hard work that goes on in the background that confirms or cast doubt on a previous theory that tends to go unnoticed. Here then is a recent paper published in Nature that helps confirm the presence of underground liquid water under the icy layered deposits at Mars` south pole.

This new body of research September 2020 draws upon a larger data set utilising 134 observations between 2012 and 2019 and the detections indicate subsurface water in the region known as Ultima Scopuli. 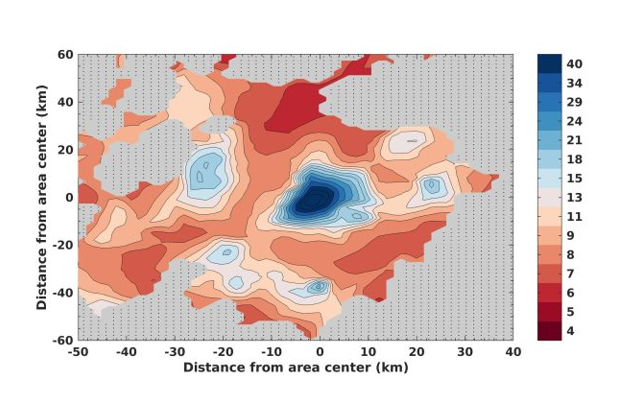 The radar instrument onboard the Mars Advanced Radar for Subsurface and Ionosphere Sounding (MARSIS) was studied using techniques similar to those used to detect lakes under glaciers in Antarctica here on Earth.

The Martian underground lake measures 30 x 20km in size with 3 others detected that are 10 x 10km in size.

The science suggests these collections of water are extremely salty allowing them to remain liquid at very low temperatures. These lakes may be a remnant of the water that was once on the surface of Mars. To be sure they exist a mining expedition may be called for capable of drilling 1.5 km into the polar ice. Any volunteers?

Feast your eyes on some of the highest-rated astrophotos in this prestigious competition. They are on display in London (details in the article). All are stunning, but one is tragic (you’ll see why).

Constellation of the month – Moira Greenhalgh

Hallo everyone. The constellation I have chosen this month is Pisces. I know, Pisces is best visible in November, but you will understand why now is important once I get to the end 😊

Firstly, finding Pisces is easy as it wraps itself around two sides of the great square of Pegasus 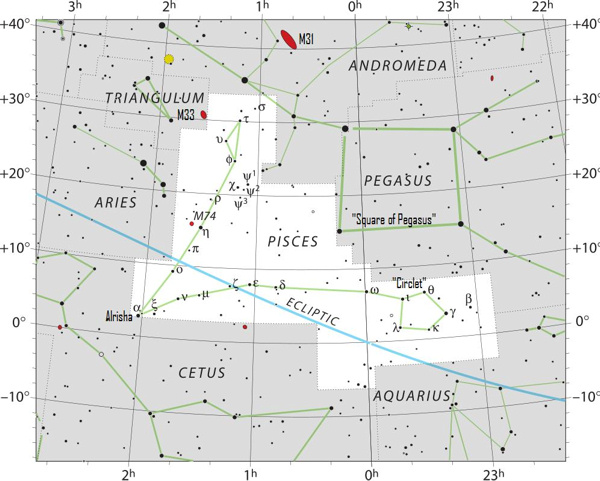 This is visible in a direction east-south-east late in the evening, moving further towards south-east and higher in the sky during the month. You notice that the ecliptic passes through the constellation, in fact the vernal equinox falls within the constellation (where declination 0 degrees crosses 0h).

Digression into the fanciful – it is therefore usually cited as first in listings of the signs of the zodiac. In the musical Hair when we celebrated the “dawning of the age of Aquarius”, we were actually in the age of Pisces and have been since 68 BC. The age of Aquarius starts around 2597 according to the IAU constellation description.

Pisces was one of Ptolomy’s original constellations, and has mythology dating from Babylonian times. I prefer the Greek story where Aphrodite and her son Eros dived into the sea to escape the monster Typhon. They tied themselves together so as not to get parted when they changed into fishes, as illustrated below. 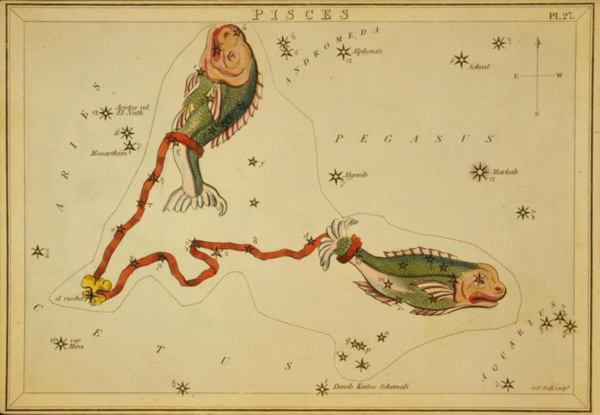 Remaining stars are too weak for me to mention. 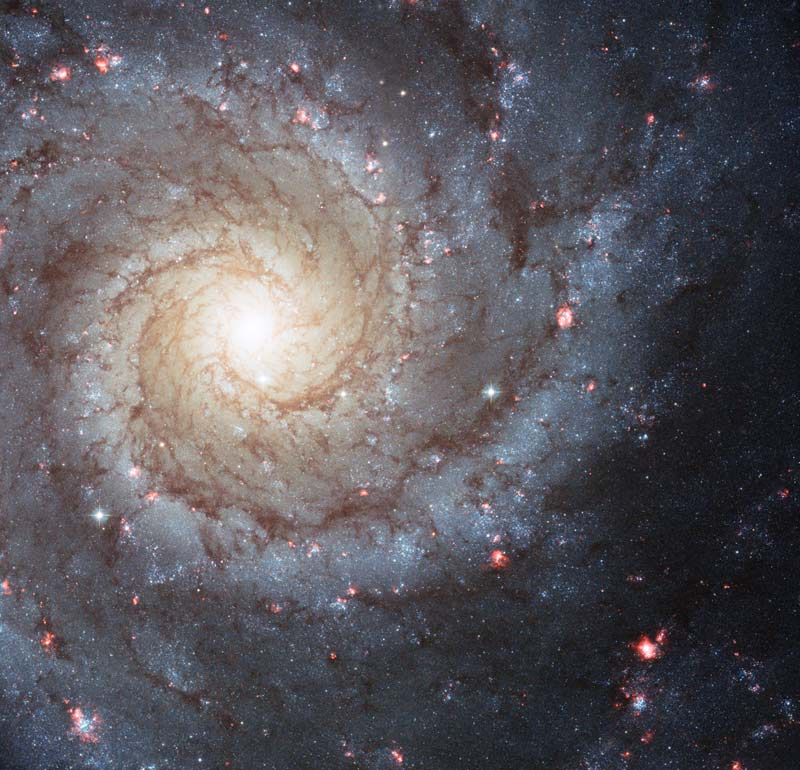 Just left of Alpherg (η Psc) is M74. This is a spiral galaxy showing many regions of star formation. A supernova was discovered in June 2003. The galaxy has an extremely low surface brightness, so you need a dark sky with good seeing conditions. November is recommended.

Hubble did not have any problem capturing a view.

Now back to the beginning, why should you be looking at this constellation now? You remember I said the ecliptic passed through the constellation? Well, ecliptic means PLANETS.

Mars is fast approaching opposition, where it will appear to us on Earth the largest we can see it until 2033, a big red/salmon ball, possibly surpassing Jupiter in brilliance. The diagram below shows the path of the planet through Pisces. It will appear at its largest around 3rd to 13th October. Do try to get out and look. 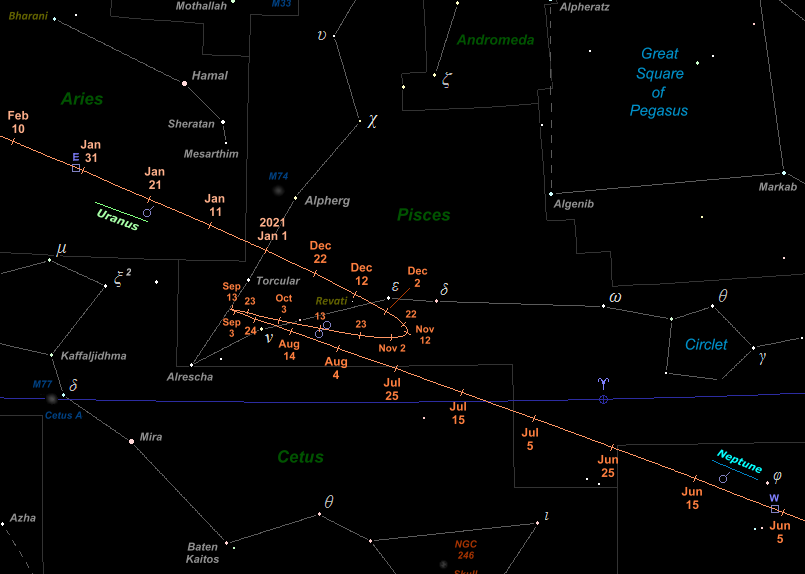 More interesting to my way of thinking, is the planet Uranus shown in green to the left of the picture. It should be possible to line up on η (eta) Psc or Alpherg, and then track left to the wonderful methane blue/green dot. I read that it could be naked eye visible, but I’ll have my binoculars out, and failing that, the telescope. I have seen Uranus before but will take any chance I can get. 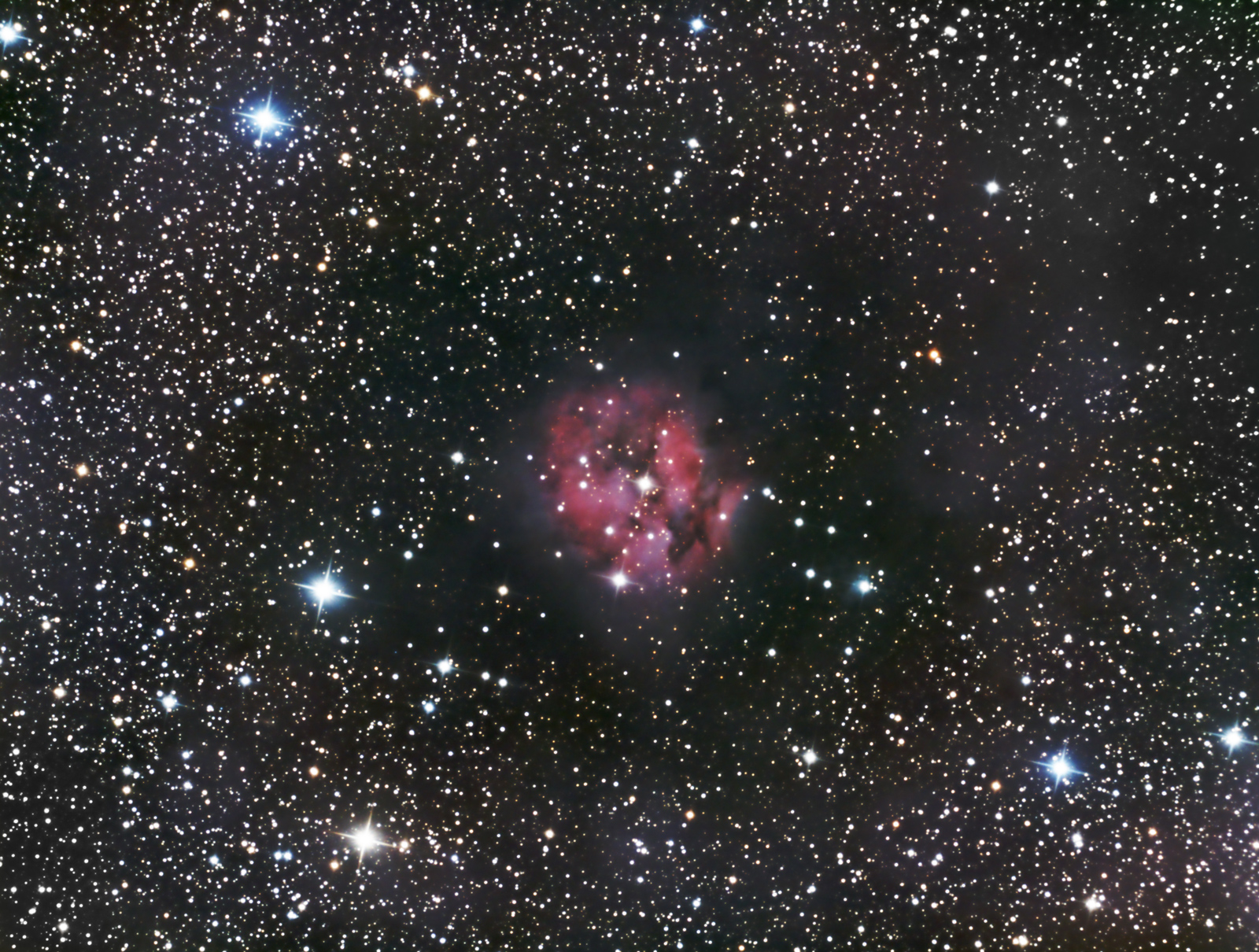 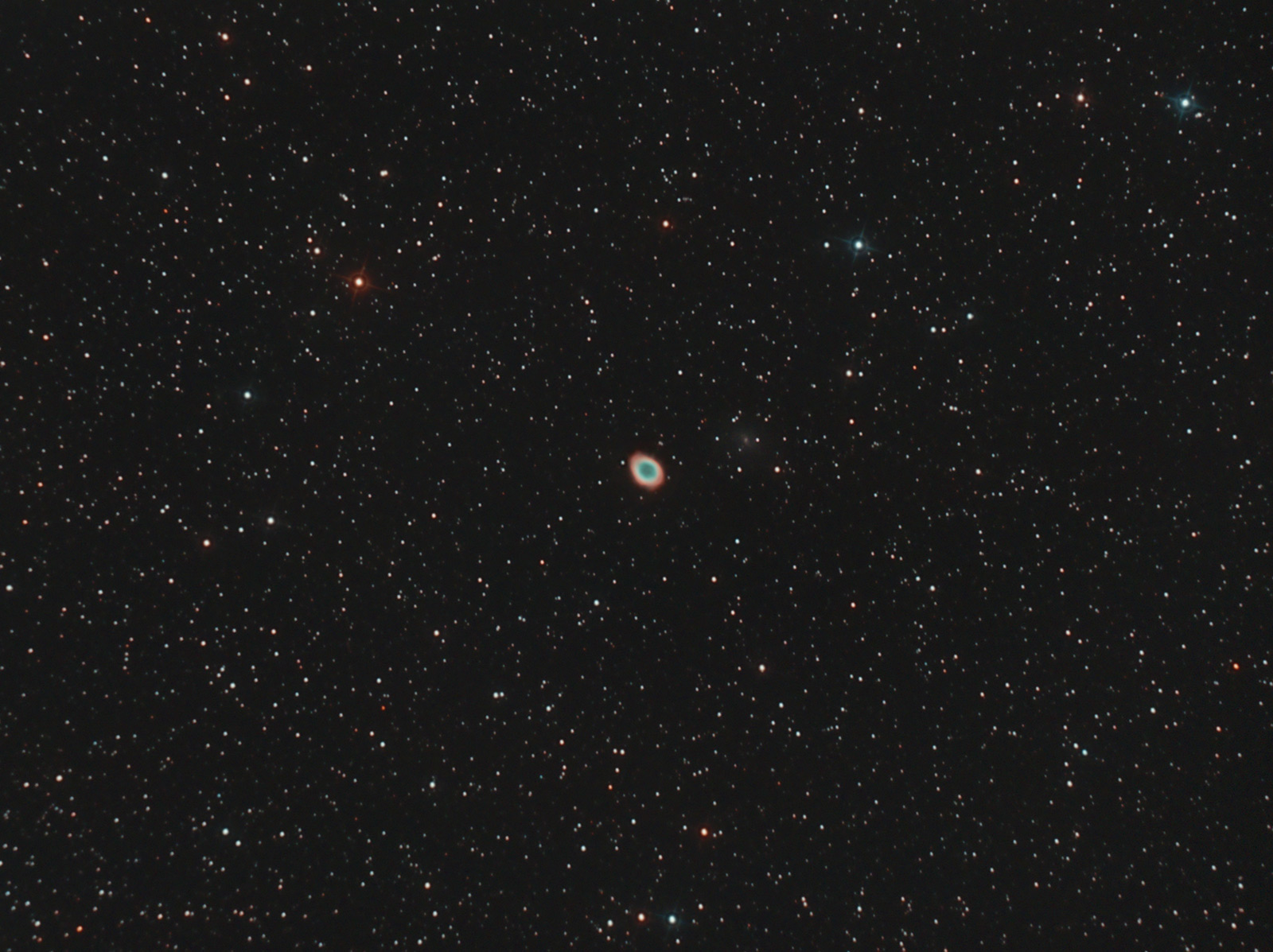 The colourful double star Albireo, magnitudes 3.1 and 5.1, at the head of Cygnus. Credit: Ian Bradley. 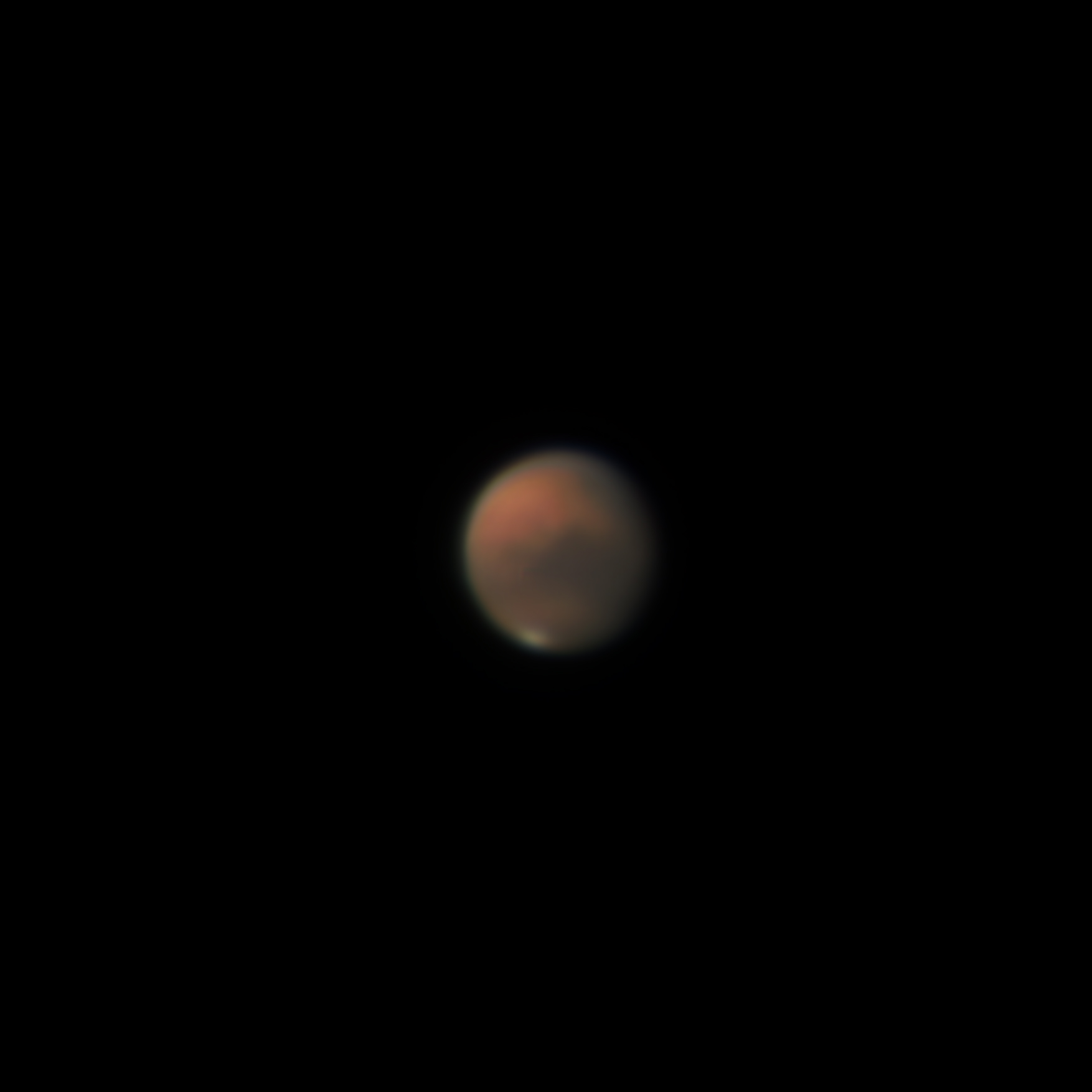 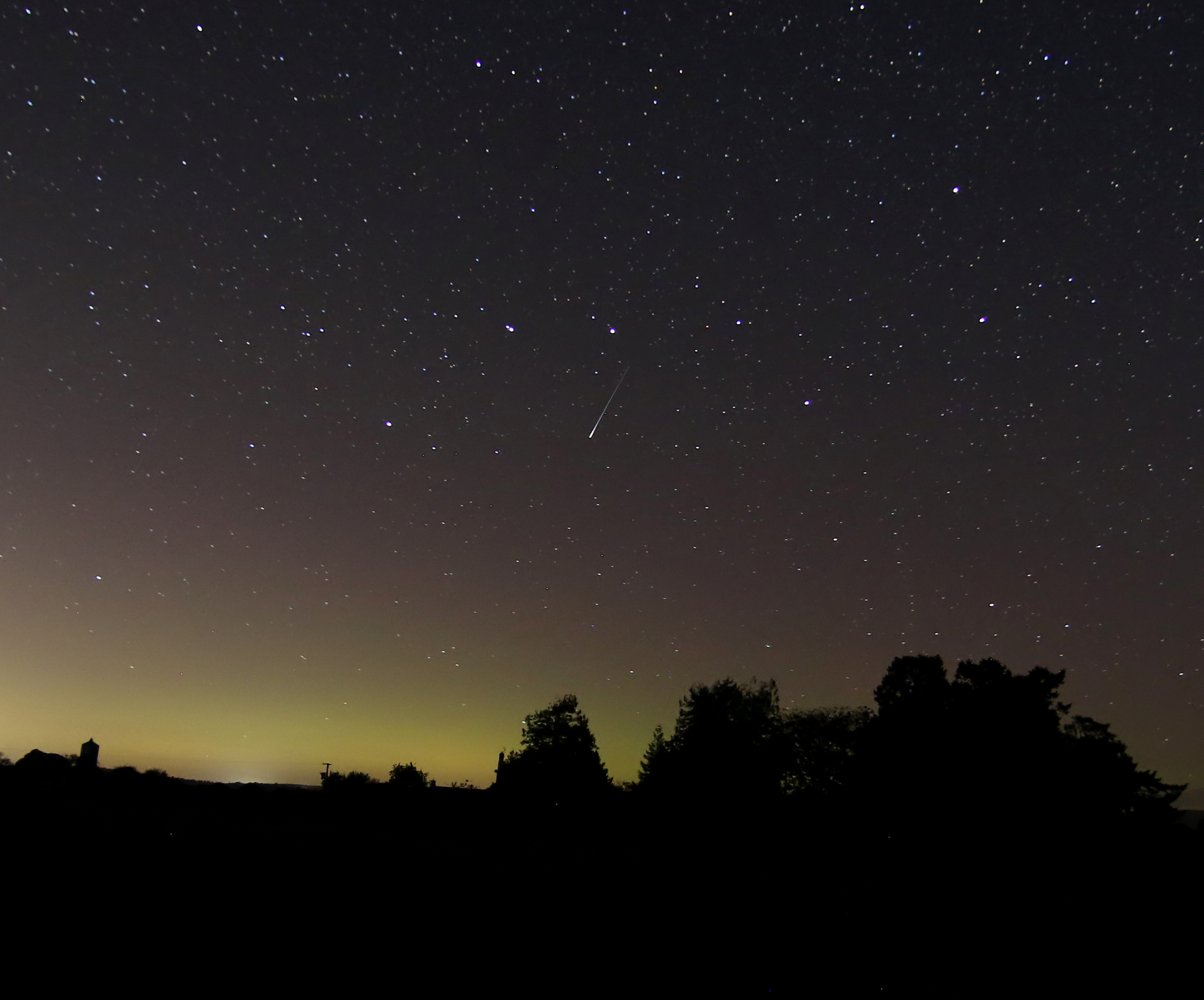 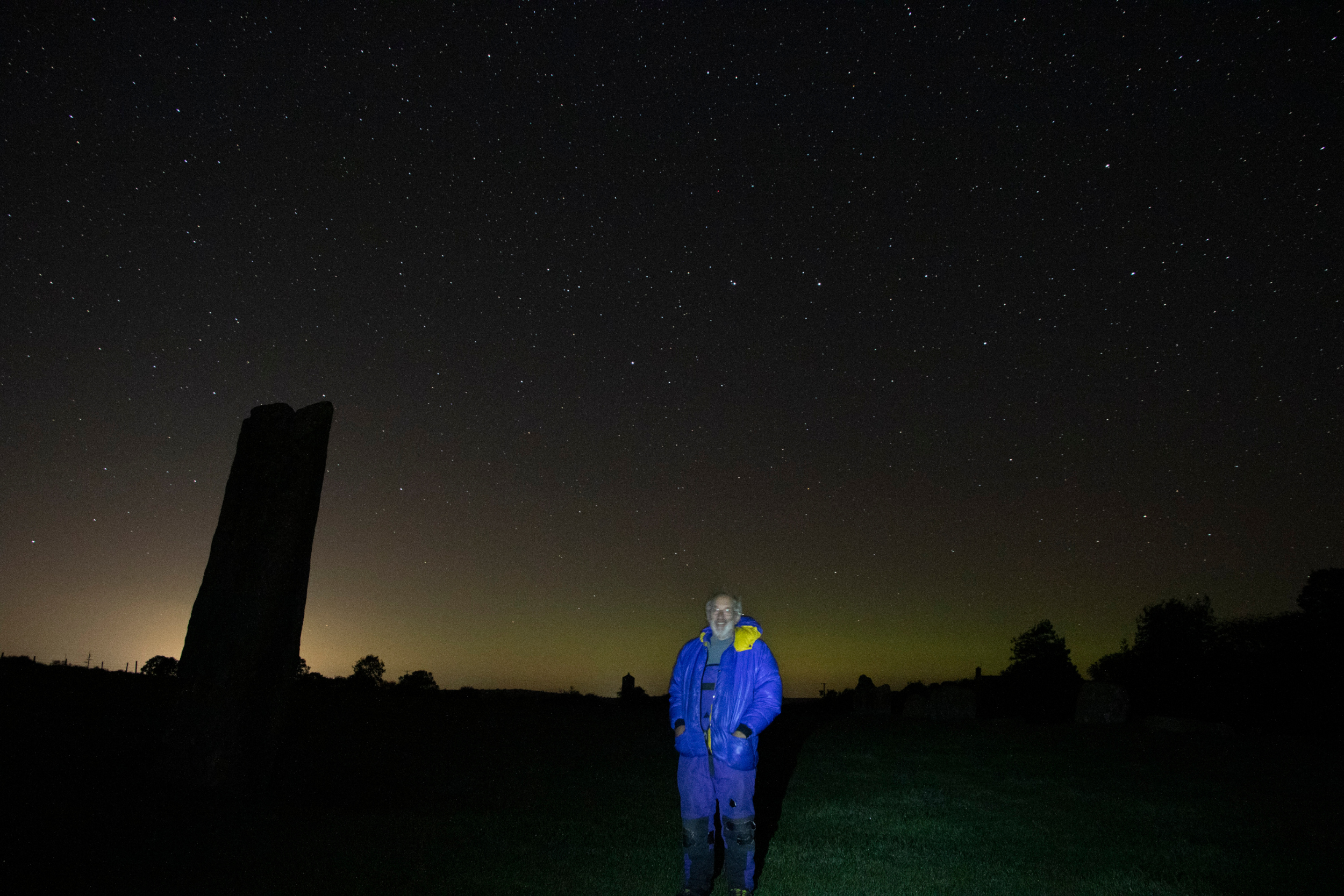