The clocks will have gone forward at the end of March, so the night begins an hour later from April until the end of October. When does the night begin, exactly? For astronomers, it is at the end of “astronomical twilight”, when the Sun is 18° below the horizon. In Kendal, that will be at 21.56 on April 1st, and 23.36 on the 30th, so observing the night sky isn’t an early evening activity during our summer months. After the 10th of May, the Sun won’t go below the 18º line at all until the 3rd of August, so we don’t get beyond astronomical twilight for almost three months.

Of course there’s still plenty to see, even in astronomical twilight, but fainter objects will become more and more demanding.

Mars is one to watch this month. Every evening throughout April at about 11pm, look south at an elevation of about 30°, Mars will be there in the constellation of Virgo. Magnitude -1.5 means it will be the brightest object around (unless you’re facing west, in which case you’re looking at Jupiter!) because on the 8th Mars will be “at opposition” – that’s the planetary equivalent of a full Moon, with the Sun directly behind you and Mars directly in front. 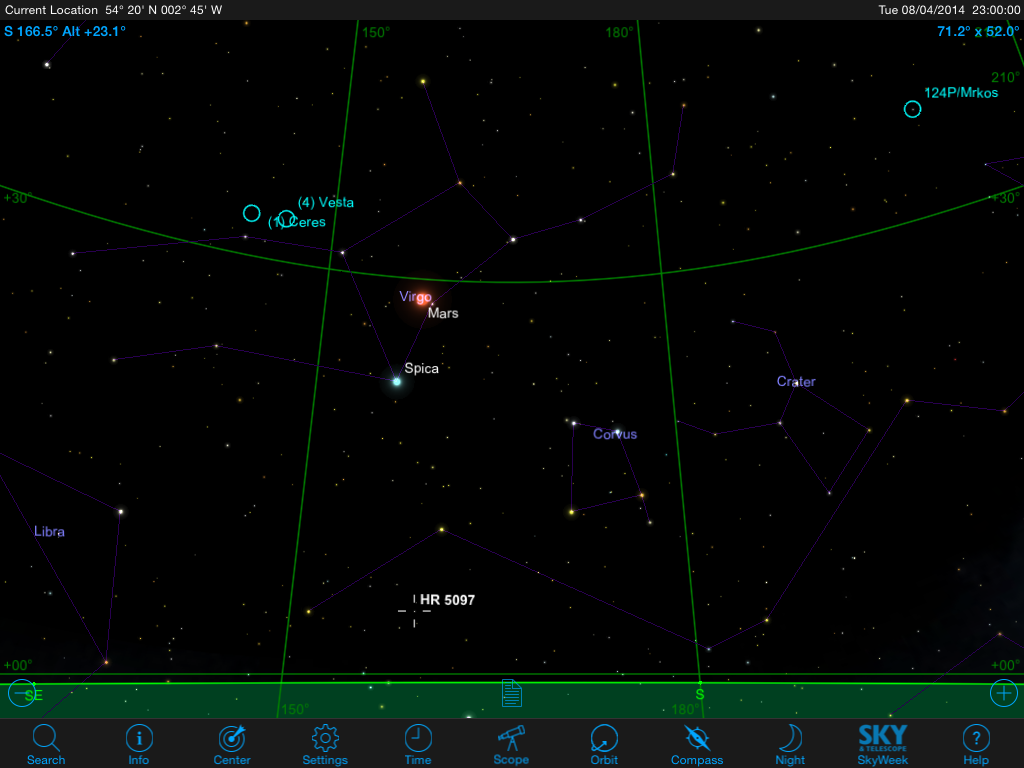 Mars’s skewed orbit means that its distance from Earth at opposition can vary, and this opposition will be one of the more distant. That means Mars will appear very small (less than 1% of the apparent diameter of the moon, compared with its maximum of 1.5%) but should still be worth observing even through a small telescope.

Vesta will be at opposition on the 13th, magnitude 5.7. 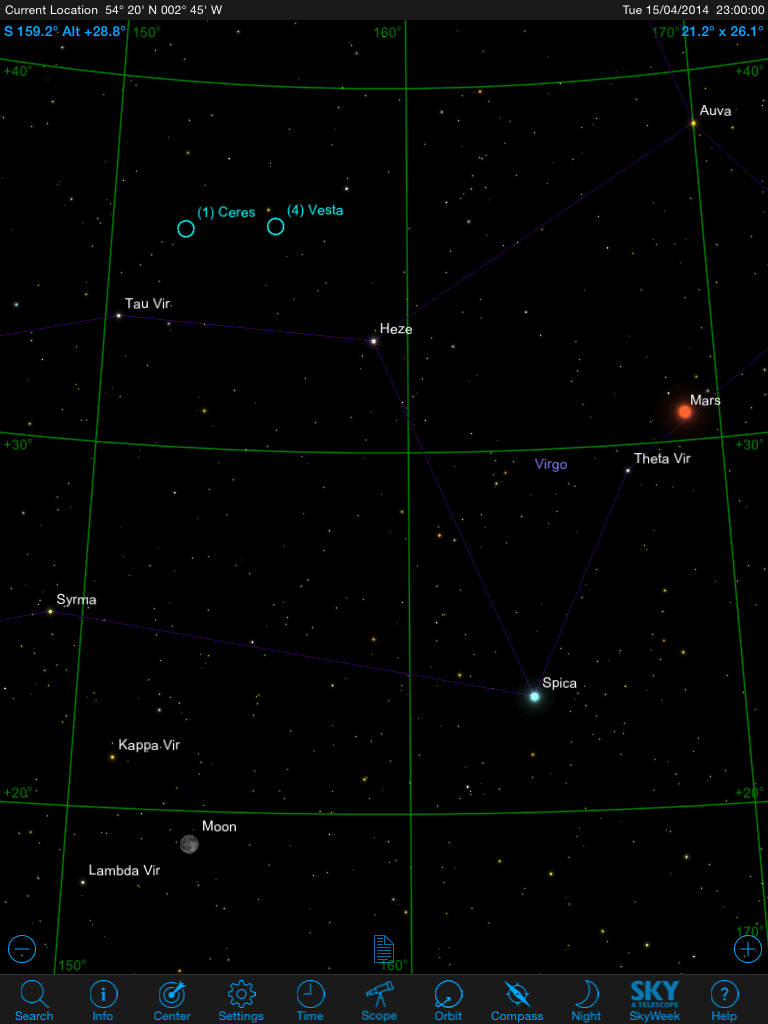 Two challenging photo opportunities, the second on the night of the full Moon!

For the more ambitious observers, also on the 15th, there will be a total eclipse of the Moon. In the UK, we will only see the first few moments as the Moon will set on the western horizon just as the Earth’s shadow begins to appear.

All the data for this lunar eclipse can be found on this website, maintained by the remarkable Fred Espinak.

The last total eclipse of the Moon visible anywhere in the world was on 10 December 2011, with totality occurring at sunrise in the UK. Here’s my photo taken at that time, across the Langdales. 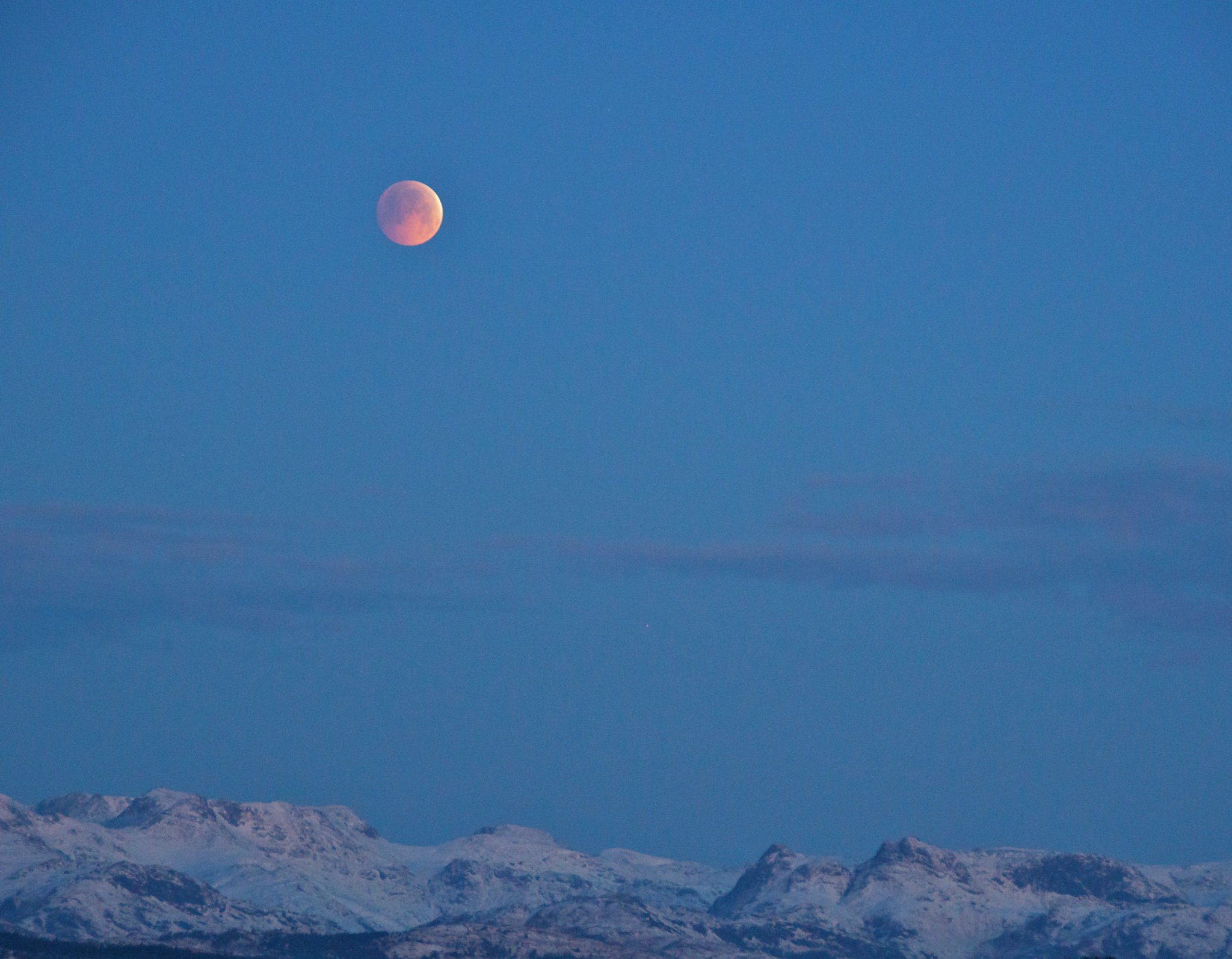 I don’t expect to catch anything of the eclipse on the 15th, but look forward to the next one on the 28th of September 2015, when we will get the whole show from about 1am until 6.30.

As mentioned last month, behind Leo and at an elevation of 50º this month, is an area dense with distant galaxies. One series in particular commands attention, appearing as a curved line known as “Markarian’s Chain”.  Set your telescope and take a look, they are around Magnitude 9 and 10, so will be a struggle with anything below a 60mm and very dark skies. 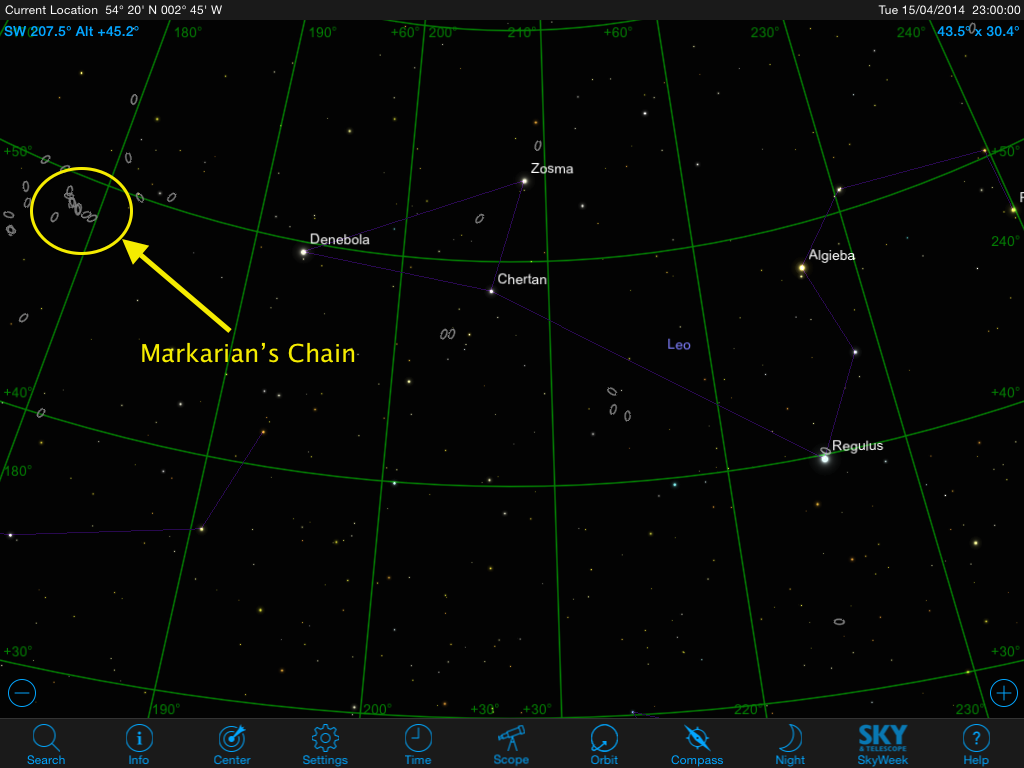