March sees the end of British Summer Time, as the clocks go forward an hour in the early hours of Sunday 29th.  That means Leo is in the mid-evening sky this month with plenty of viewing time – even for those who like to get to bed before midnight.

Under Leo’s belly, three galaxies from the Messier catalogue – each around Magnitude 9 -can be seen as “faint fuzzies” in a modest pair of binoculars.  They are M95, M96 and M105, and are separated by about a degree from one another.

Under Leo’s tail, three more can be found – slightly brighter but still around Magnitude 9 – these are the official “Leo Triplet” of M65, M66 and NGC3628.  Separated by only about half a degree, these three are a favourite target for astrophotographers.  I’ll be trying to catch them myself this month.

Behind Leo comes Virgo, and above Virgo the small constellation of Coma Berenices.  The area around these two constellations is full of galaxies just beyond the reach of naked eye, but well worth exploring in binoculars or a telescope from a dark location.

Galaxies at the zenith are the most satisfying to capture in photographs, and the pair of M81 and M82 – near the constellation of Ursa Major – are pretty well placed this month.  I managed to catch them last month, from the church carpark at Old Hutton: 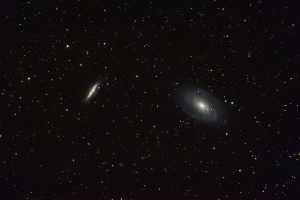 Venus and Mars are still visible above the western horizon at dusk, Venus the brighter at about Magnitude -4.0 and Mars at a more modest Magnitude 1.3.

Still with us and dominating the mid-evening and later sky is the planet Jupiter, shining at Magnitude -2.5.  Through binoculars it is very easy to spot up to four of Jupiter’s moons, tiny dots of light clustered in a flat line close to the planet.