At last the nights begin to go dark again.  Not fully dark, that doesn’t happen until August, but dark enough for good quality stargazing.

Venus and Jupiter continue to be the highlights of the evening, setting together in the west about an hour or so after sunset.  They make a glorious sight from many locations near to Kendal, for example the Mushroom on Scout Scar, or the small car park at Helsington Church, with its clear views across the Lake District fells.  At the start of the month the planets appear less than half a degree apart – that’s less than the diameter of the Moon in the sky – and will be changing their relative positions every night. 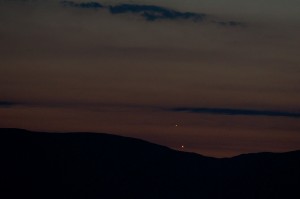 Venus and Jupiter from Helsington Church

Saturn is always a great sight in binoculars or even the most modest of telescopes, and remains with us for another couple of months or so.  After sunset, when you have found Jupiter and Venus on the western horizon, look for the first star to come out in that direction (up and left), which will be Arcturus.  From Arcturus move down and left again to find Saturn at about the same magnitude.

Near to the zenith this month will be Vega, in the constellation of Lyra, one of the brightest stars in the sky at magnitude 0.0.  When darkness permits, the next door star is Epsilon Lyrae, around fifth magnitude, the infamous “double double”.  Test your kit by cranking up the magnification to split Epsilon Lyrae first into a double star, then each star of the pair into its component double.  Four stars in all, so close together that they appear as one.

Also close to zenith is the constellation Hercules, containing one of the most rewarding star clusters in the northern hemisphere – Messier object M13.  I’ll be pointing my telescope and camera at this as soon as conditions permit.

As always, I get my fix from the Jodrell Bank monthly update of what’s on in the night sky.  Full description and location guides for the most interesting sights are here for all to see.