It’s a cold time for all of us, but especially for stargazers!  On the other hand, the nights are still long, and the arctic airmass that brings the really cold spells is particularly clean and clear.

For evening observers, full darkness is upon us by about 7pm, with the southern sky dominated by the unmistakeable figure of Orion.  Starting from there and moving west, a star map will help you pick out Taurus, Perseus and Casseopeia; from Orion moving east, there are easy pickings with Gemini, Cancer and Leo.

This month’s particular highlights, however, are all comets and planets.

Comet C/2014 Q2 (Lovejoy) is still with us, but fading as the month unfolds.  For astrophotographers, it is also higher in the sky – which makes for better photos.  In this one, Lovejoy (circled) is moving between the constellations of Andromeda and Perseus, but the almost full Moon spoils most of the photographer’s view: 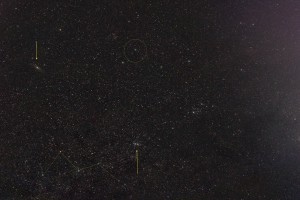 Casseopeia, Andromeda Galaxy M31, Lovejoy (circled) the Double Cluster and Perseus (on the right) in the moonlight

Shortly after perihelion in December, Comet 15P/Finlay jumped a couple of magnitudes to about 9 – that’s enough for a small telescope or good binoculars, and is a real challenge to find above the western horizon shortly after dusk.  Here it is from late January, and good luck if you try to chase this one down! 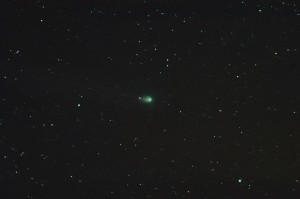 Comet 15P/Finlay low in the west at dusk

If you fancy a go, the website Heavens Above is one of my favourite sources of observing information.  Click on the Comets link for comprehensive guidance on the best available on any date.

Jupiter is still a sight to behold, rising bright in the East at dusk – accompanied by the Moon early in the month.  If you haven’t ever turned your binoculars towards Jupiter, give it a go and enjoy the sight of four tiny dots next to the planet’s disc.  Those are the four Galilean moons – recorded by Galileo himself and named by him the “Medicean Planets” in honour of his young patron Cosimo II, the Grand Duke of Tuscany and head of the Medici family.

In the west, Venus shines brightly above the horizon at sunset.  Half way through the month, Mars comes to join the party and around the 20th to the 22nd the two planets will be separated by only half a degree – about the diameter of the Moon.  To cap it all, the three-day-old crescent Moon will join them on the evening of the 21st, making a visit to Scout Scar pretty much obligatory if the skies are clear!