Full darkness at 6pm means there’s no excuse for not getting out in December – apart from the endless cloudy nights of course!  There are some great sights this month, here’s a selection:

The unmistakeable bright “star” rising in the east at around 10pm, Jupiter is always worth a look in binoculars or a small telescope, when the planet resolves into a disc and up to four of its moons will be revealed.  The four brightest moons are known as the Galilean moons, after their discovery by Galileo in 1610.  At the moment, the Earth is level with Jupiter’s equator so the Galilean moons will appear to collide or “occult” or “eclipse” one another as they orbit.  If you observe for an evening, you will definitely see the tiny dots move relative to one another, and two might well appear to merge into one.

Emanating from the constellation of Gemini, this annual meteor shower is expected between the 8th and the 17th, peaking at about 7am on the 14th.  Late night on Saturday 13th should provide great viewing: at their peak they can show 100 per hour.

Gemini is above and to the left of Orion, so it’s pretty easy to find.  The Eddington Astronomical Society will be viewing from the darkness near Orton, full details here.

Near the zenith in the reasonable hours of the evening this month, you will find Cassiopeia, Andromeda and Perseus, so there’s plenty to excite the photographers.  Late last month I caught up with M31, the Andromeda galaxy: 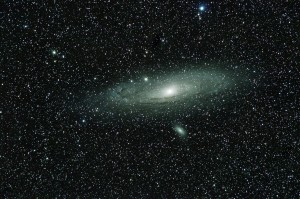 This is one of the easiest and most satisfying targets for astrophotography, and is ideally placed high in the sky for the whole of December.

Never very high in the sky, but moving along the celestial equator and instantly recognisable, is the constellation of Orion.  This must be a target for December, especially the nebula M42 in Orion’s sword – another straightforward but rewarding target.

The remarkable amateur comet chaser Terry Lovejoy has found another, this one should start to make its presence known at about magnitude 5 by the end of December.  It is currently far enough below Orion that it is not visible in our skies, but during December it will move up and right, towards Orion’s feet.  By the end of the month it will be half way between Orion’s feet and the southern horizon at about 11pm, with the promise of more to come in January.