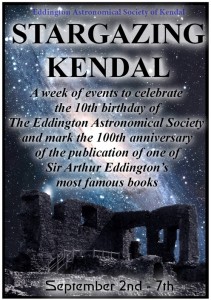 In September Eddington Astronomical Society (with help from our friends in the Cockermouth Astronomical Society) will be holding a number of astronomy-themed events in Kendal, to celebrate both our own tenth birthday and the 100th anniversary of the publication of one of Sir Arthur Eddington’s astronomy books. Called Stargazing Kendal, and spread around different locations and venues in the town, the week combines illustrated talks with stargazing events, exhibitions and films to make a mini festival of astronomy in the Auld Grey Town. The emphasis will be on beginners astronomy, and we’re hoping that we’ll be able to introduce lots of new people to our fascinating hobby, and maybe welcome them to our society too!

Here are some details of the events we have planned.

As part of Stargazing Kendal we’ll be throwing open the doors to our monthly meeting and inviting people to join us for our popular annual Telescope Night, when members of the Society bring along their telescopes for a good old fashioned “Show and Tell” evening. So, now the dark nights are coming back, if you’re interested about getting into amateur astronomy as a hobby, why not come along and learn all about the different types of telescopes (and cameras and other equipment) amateur astronomers use, and get expert advice about buying your own? Everyone welcome,  no charge to attend the meeting. (But note the Museum car park charge) 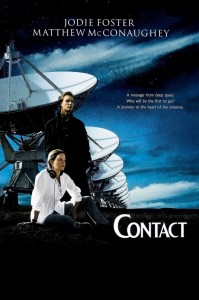 The Brewery Arts Centre is one of our biggest supporters – we have been holding public observing events in their gardens for years now – so it’s no surprise that they are generously supporting Stargazing Kendal too! On this evening they will be showing the popular science fiction film “Contact” (12A) in the Warehouse Cafe. Based on the best-selling book by astronomer Carl Sagan, the film tells the story of mankind’s first contact with extraterrestrials. If you like your aliens flying hot rod spaceships, blowing up the White House and being generally nasty, it’s not for you. But if you want an intelligent look at how we might detect radio signals from life “Out There”, and what might happen next, you’ll love it..! 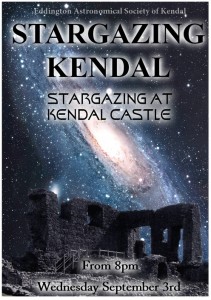 As the Sun sets on Wednesday evening, Eddington AS members – joined by some of our friends from the Cockermouth Astronomical Society – will be up at Kendal Castle with our telescopes, to show members of the public some of the amazing things visible in the night sky at this time of year. While the sky is still bright we’ll first take a look at the Moon – seeing its spectacular craters and dark seas of ancient, frozen lava. As twilight deepens and the sky darkens we’ll swing our telescopes towards the planets Mars and Saturn, which will be shining low in the south west. If you’ve always wanted to see Saturn’s famous rings, this will be your chance! By 11pm the sky will be dark enough to see the beautiful Milky Way cutting the sky in half, and we’ll be able to show you many star clusters, galaxies and nebulae too. So if you’re free that night, join us up at the Castle for an evening of stargazing. Got a telescope or a pair of binoculars? Bring them along and we’ll be happy to show you what you can do with them!

Note: this event is totally dependent on the weather though, so use your own common sense about hiking up that hill if you think it will be too cloudy or too wet. 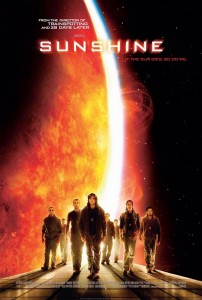 The second of our SF films is “Sunshine” (15), which was directed by Danny Boyle. This is more of a good old fashioned space thriller than “Contact”, and tells the story of the crew of a spaceship on a desperate mission  to save mankind by “kick-starting” the Sun, which is dying. The mission sent before them failed when the spacecraft vanished without explanation, and this is mankind’s final chance. But as they approach the Sun, and prepare to deliver their payload, they make a startling discovery as they pass Mercury – the first ship! They board it and find all the crew dead… What happens after that is exciting, sometimes frightening and sometimes gory too, a real space horror story brought to life by Danny Boyle. If you’re thinking it sounds like a daft story, well, OK, it is, but if you can suspend disbelief for a couple of hours the film is absolutely beautiful to watch, with stunning visions of the Sun bringing it to life like no film has ever done before. And as the astronomy adviser was none other than Professor Brian Cox you can be sure (most of!)  the science in the film is accurate too. 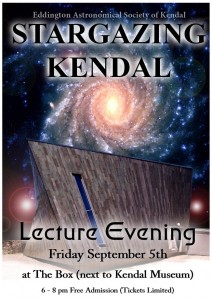 Come along to an evening of talks on astronomy at The Box, next to Kendal Museum.

This event is free, but tickets are limited so get your seat booked early. Tickets will be available from Kendal Museum. 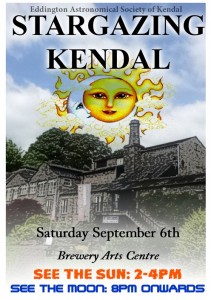 Cross your fingers for clear skies all day on this day, because we’re hoping to show people both the Sun and the Moon from the gardens of the Brewery Arts Centre!

If you’re thinking “Sunwatch sounds dangerous!” don’t worry, we’ll be observing and showing people the Sun in absolute safety, by projecting its image onto viewing screens or looking at it through very special solar filters attached to our telescopes. And then, in the evening, we should have spectacular views of the Moon, looking at its craters, mountains and seas through a variety of telescopes. This free event is suitable for everyone. We’ll even have telescopes set up especially, at low heights, so kids can look through them without having to be lifted up or stand on a chair! And as you wander around the Brewery garden, feel free to ask any of the astronomers gathered there about the night sky and the universe, they’ll be happy to help.

Again, note this event is very much weather permitting, so on the night use your own common sense before setting off if the weather looks dodgy. 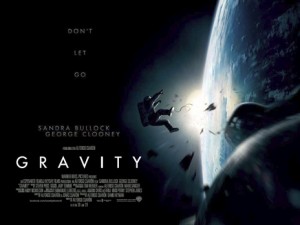 The third and final of our SF films is the multi-award winning “Gravity“. If you’ve already seen it you’ll want to see it again, and if you missed it when it came out, here is another chance to watch this heart-in-mouth story of how a brave (but pretty rubbish, to be honest!) astronaut, played by Sandra Bullock, fights to survive after a space calamity leaves her stranded in space, with time, and her air, running out… Showing in 3D in the Brewery’s main cinema.

Note: if the sky is clear, after the film there will be “EAS Stargazing* in the Brewery Arts Centre gardens from 10pm.

We hold our monthly meetings at Kendal Museum, and the Museum is supporting Stargazing Kendal by hosting two exhibitions for us. So if you come along to the Museum you’ll be able to see an exhibition describing the life and achievements of Sir Arthur Eddington – the astronomer, born in Kendal, who our Society is named after – and also a display of fascinating meteorites, real rocks from space! The display will include small samples of rock from the Moon and Mars, as well as amazing specimens gathered from all around the world.
TUES Sept 2nd – SUN Sept 7th: EAS members’ photos will be on display at Brewery Arts Centre.

*  Note: all observing events will be “weather permitting”.