Welcome to the August newsletter. I hope you are keeping well.

I’d like to take this opportunity to those new members who have joined us over the summer. We all hope you enjoy the Society.

We hope you have been making the best of the unusual dry summer weather and have managed to see some of the noctilucent cloud displays. The one on July 7th was very good and I believe there was another great display a few days later, one I managed to miss. Whilst they are ‘only clouds’ they are quite spectacular with their eerie blue colour and strand-like structures. Sadly, the displays are probably now finished for this year.

Don’t forget to look out for the Perseid meteor shower which peaks around dawn on August 13th. Take a look as this is probably the best meteor shower of the year, and there is no Moon getting in the way There is lots of activity a day or so either side of the peak so if it is clear, get out somewhere dark, take a comfy chair/recliner and just look up! Meteors should be visible nearly anywhere in the sky but the trails will point back to the radiant in the constellation Perseus. At 23:00 on the 11th, Perseus will be in the NE, moving further east and higher as time goes by.

The committee took the decision for a meeting holiday over the summer, so our next meeting will be at 7pm on September 2nd, when we have Pete Williamson FRAS speaking on “Herschel to Hawkwind, Astronomy & Music: How each influence each other”. That brings us to the venue. We hope to be able to hold the meeting as ‘normal’ at Kendal Museum, but of course that is dependent on the state of the pandemic. It is also unclear at this stage if Pete will be with us in person. Obviously, that is a personal decision for him. The bottom line is that the meeting is likely to be a ‘hybrid’ with some people present in person and others connected via Zoom.

David Glass and Phil Morris have visited the Museum to talk to the management, whilst Clive was on Zoom and acted as a remote member. Two critical items were discussed:

Firstly, ventilation. As we all now know, good airflow is critical in reducing the potential of infection. We have agreed with the Museum that we could run meetings with two fire doors open. In addition, we were assured that the windows that have been painted shut would be fixed in time for our meeting. However, note that it is likely to be colder than normal, so if you attend, wrap up well.

Secondly, we realise that there may still be people who are unwilling to attend in any enclosed space, so David has tested live streaming the meeting via Zoom. This appears to work quite well. On the test, questions could be asked in the room and heard by the remote audience, and vice versa. If our speaker can’t make it, they will still be able to give their presentation via Zoom, as now, but at least we will have the added benefit of seeing each other again.

Of course, this is all provisional as we have no idea what the virus will do.

Don’t forget, contributions to the newsletter from any member are most welcome. They could be stories, historical snippets or photographs. Just get in contact with an email.

So, to conclude, enjoy the last of the summer and keep safe. Clear skies. Clear Skies.

Many of you will have heard or read about the Dark Skies Cumbria Project organised by The Friends of the Lake District run by Jack Ellerby – see here.

We hope Jack will give the Society an update on progress with the project at our November meeting.

The Society, through your committee, has been supporting the project and have had over the past few years several discussions with Jack, and previously Johanna Korndorfer [who gave us a talk in 2018]. Amongst other things, I have been looking at local planning applications and commenting on proposals if they appeared likely to increase light pollution – a recent case in point being the proposal to increase the size of the Carus Green golf driving range which we circulated information about in an email. Whilst I have nothing against their expansion per se, their current lighting is appalling and hopefully the criticism received from several sources will spur the Club to think more carefully about their lighting and bring it into the 21st Century

However, that it not the point of this article. I want to report that the Project has employed professional consultants to survey the excessive lighting in Kendal. The report identifies most of the prominent ‘culprits’, around 100 with very few surprises, and Jack is expecting to approach those businesses and diplomatically talk to the about reducing the problem, and in the long term possibly save them money! In addition, the Project, working with Cumbria County Councils lighting team, has successfully delivered new downward pointing warmer LED light arrays on Low Fellside in Kendal, replacing lights that illuminated walls on buildings and the sky rather than the intended paths. Whilst a very small step in the greater scheme of things, it is a first step in the right direction.

As part of a dark sky festival, we [EAS] will be running, subject to any Covid restrictions, a Moonwatch open to the general public. The date is likely to be Friday November 12th. The venue is still being discussed as our initial first choice venue will be problematic due to flood defence works. A likely candidate is Gooseholme in Kendal but that has yet to be confirmed. The committee would appreciate support, and a few telescopes, from the membership if it is clear.

It’s been a busy few months since the last newsletter! I’ve included some detailed items below, but we’ve also seen the Hubble Space Telescope come to a halt thanks to a glitch (but is now working again), the ISS perturbed by a misfiring thruster and astronaut Gus Grissom possibly exonerated for losing his nerve, blowing the hatch and sinking the Mercury capsule Liberty Bell 7.

During July, two key sub-orbital flights carrying civilian passengers took place after years of testing and validation of the spaceships. On 11/7/21, Virgin Galactic launched its SpaceShip Two spaceplane Unity from underneath the wing of its WhiteKnight Two carrier aircraft, from an altitude of 50,000 ft. Unity was then propelled by its own rocket motor whose 70 second burn kicked Unity to an altitude of about 86 km, a point at which space is said to start. Unity then descended under gravity and glided safely to land at Spaceport America, New Mexico where is journey started. The passengers, including Sir Richard Branson, experienced microgravity for a few minutes and got to see the curvature of the Earth from space.

To learn more about the hardware, here.

And for a 3-minute video that captures the flight well, see here. 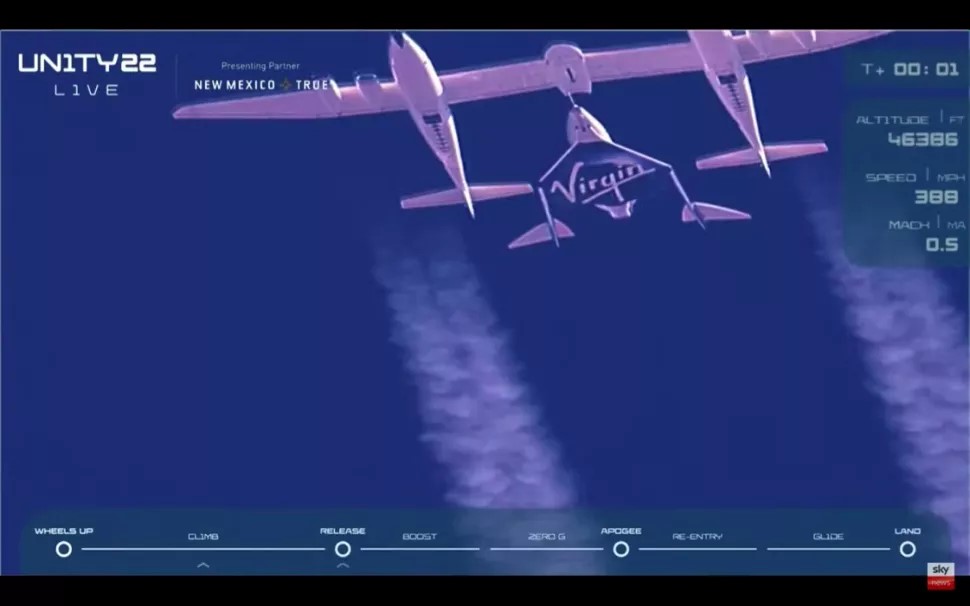 Unity detaching from WhiteNight 2 on 11/7/21, just prior to ignition of its rocket (credit: Virgin Galactic). Click toenlarge.

For a more conventional rocket launch experience for sub-orbital passengers, there’s Blue Origin’s New Shepard rocket, which took its first passengers on a sub-orbital flight to about 100 km on 20/7/21 from its launch site in Texas. The passengers included Geoff Bezos, and Wally Funk (age 82) who was trained as female astronaut in the 1960s but never got to fly at the time. The passengers travelled in a comfortable capsule with big windows mounted on a booster rocket, so they got to experience a traditional countdown, lift-off, capsule separation and a parachute/rocket assisted landing with great views – all of which went smoothly. For the full webcast of the flight (over 2 hours!), see here  (LONG video!!) and zoom forward to about 1 hour 40 min to see the flight. And here’s the landing: 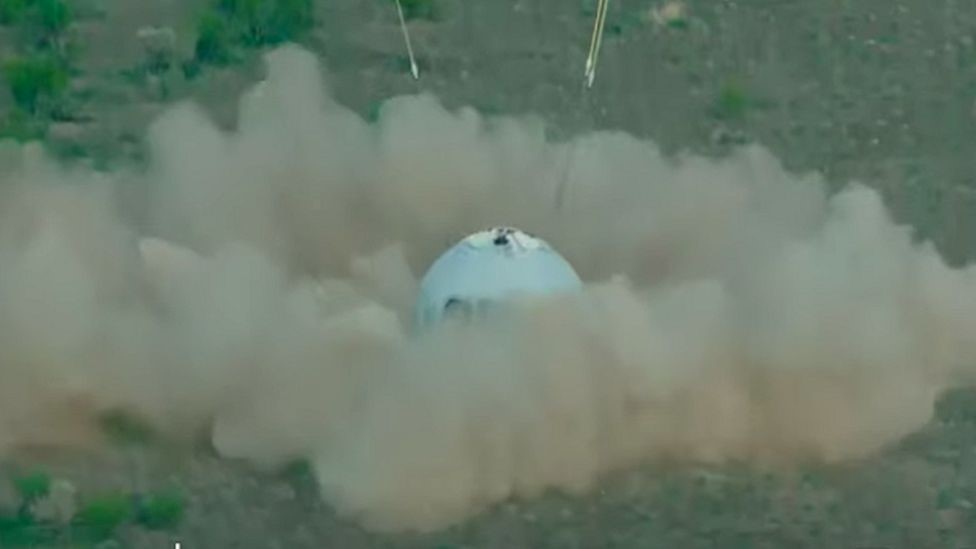 I haven’t dared to look at the price tag for tickets!

All the passengers on board might have thought they would come back as astronauts from this trip because they technically went into space. However, the FAA (Federal Aviation Authority, USA) saw what was on the horizon and changed the definition. Not only do the people on board need to be crew, not passengers (i.e. employees or contractors of Blue Origin) to be classed as astronauts, but they need to carry out “activities during the flight that were essential to public safety, or contributed to human space flight safety.” The change came into force on the same day that New Shepard launched with passengers. Whether that dampens the experience for paying passengers remains to be seen. The passengers on board Unity might still have a case though – all of them were tagged “mission specialists”!

We got to see the test launch and successful landing of Starship SN15 just before our last Zoom meeting in May. Since then, there haven’t been any more flights, but there was a test fire of Raptor engines on the other part of the eventual rocket on 19/7/21 – the booster, which is even taller than the Starship. This booster is still in place near the launch site. There has also been a lot of construction work going on, to provide a massive launch tower, new fuel storage tanks and a giant ring to stand the rocket on prior to launch. There’s a nice summary here of what’s been happening and what is planned.

Bath University was scheduled to hold the annual National Astronomy Meeting in July 2020, to coincide with the 200th anniversary of the Royal Astronomical Society. This didn’t happen because of lockdown, but it did take place this year – online. I “attended” to present a research poster. The parallel sessions and plenary talks were all very well run online, and the poster session was run via gather.town which was fun! In this, participants choose an avatar for themselves and end up in a plan view of a foyer and poster halls to navigate through using the arrow keys. If participants get close enough, their camera and mic feeds spring into action and they can chat. There were also “easter eggs” hidden throughout the space, with facts about Bath, the university and astronomy. People could also meet in breakout areas for discussions. The plenary talks were all very good, and are available here (click on the youtube link after the summary of each talk).

Although it would have been great to visit Bath, this was an excellent alternative which in my opinion worked very well. The next NAM is in Warwick in 2022, and there is talk of making this a “hybrid” meeting with people both there in person and attending online. 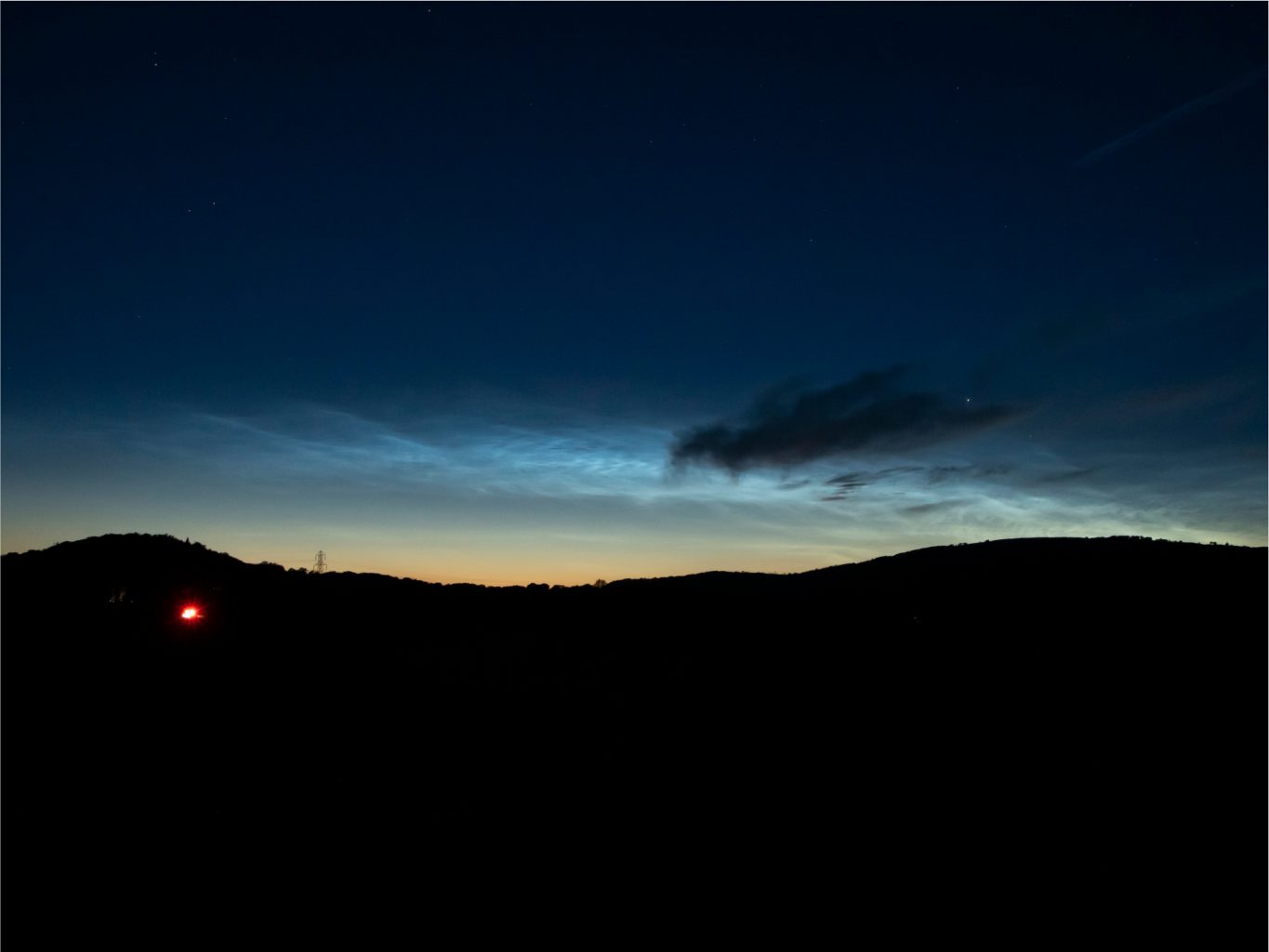 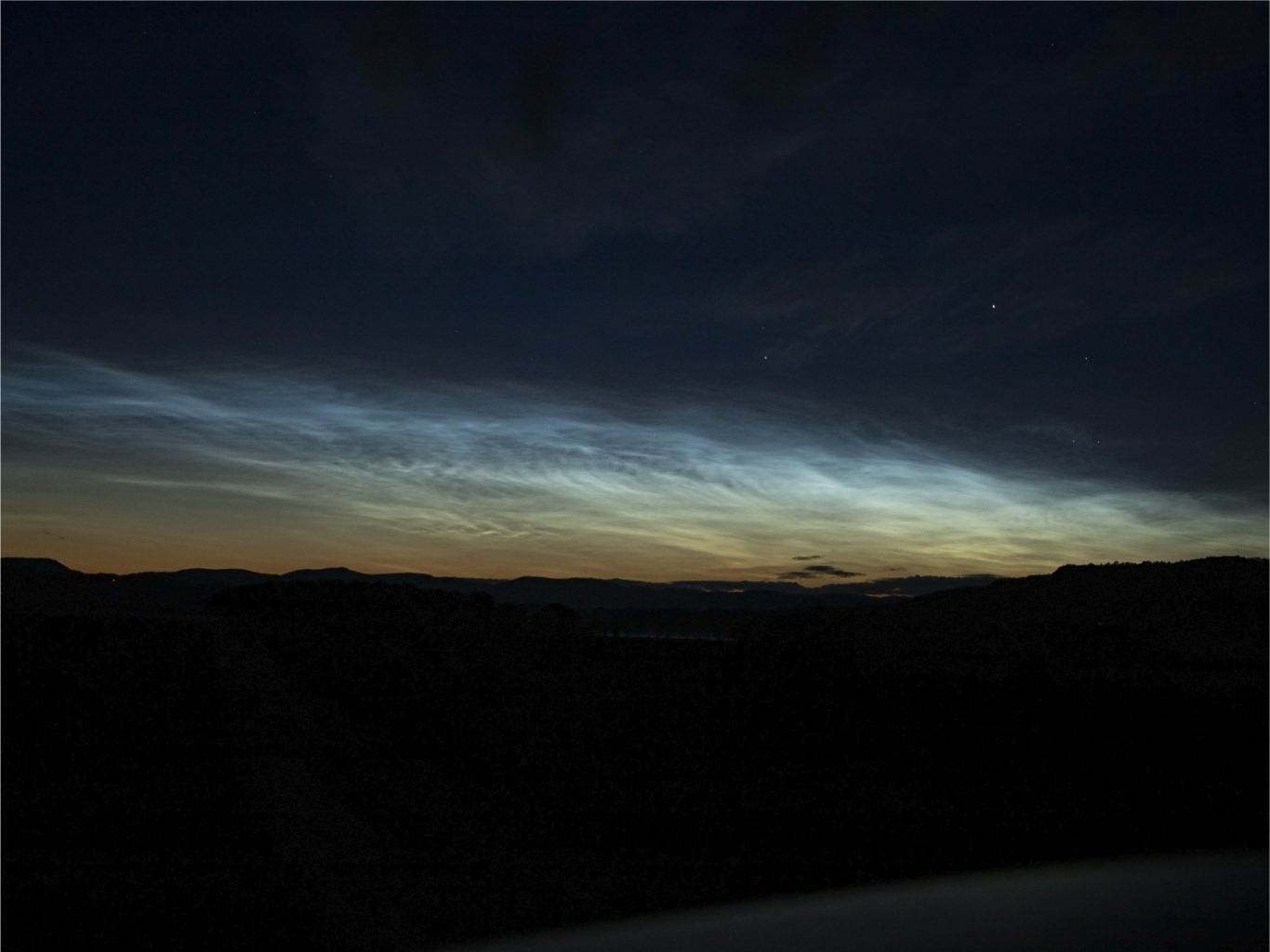 Noctilucent clouds on July 7th photographed from Meathop Moss (upper) at 00:04 BST and the Lyth Valley at 00:23. Click to enlarge. 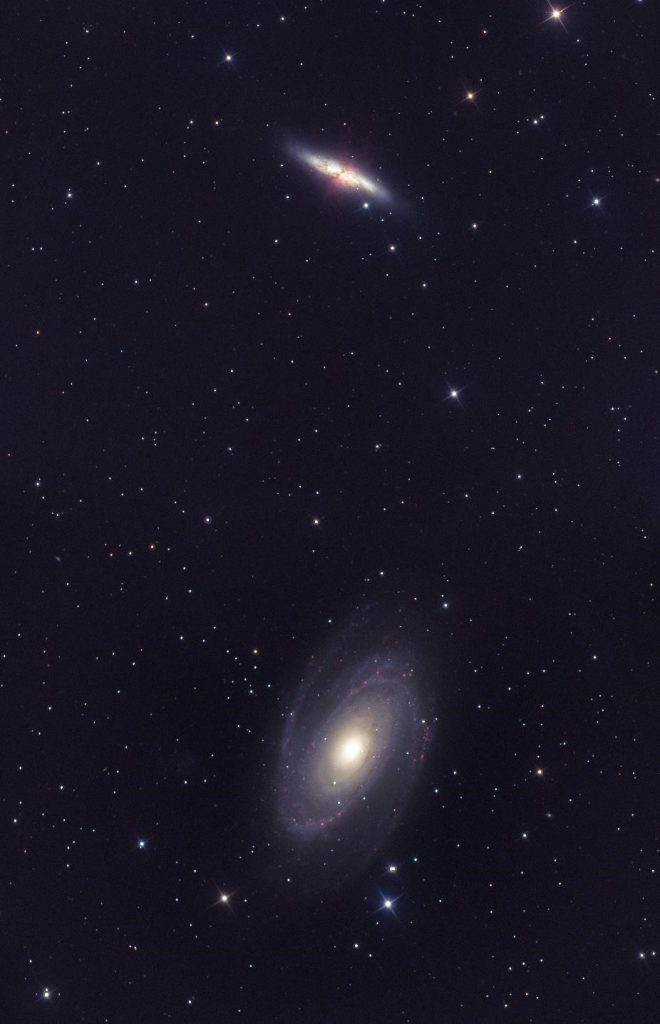 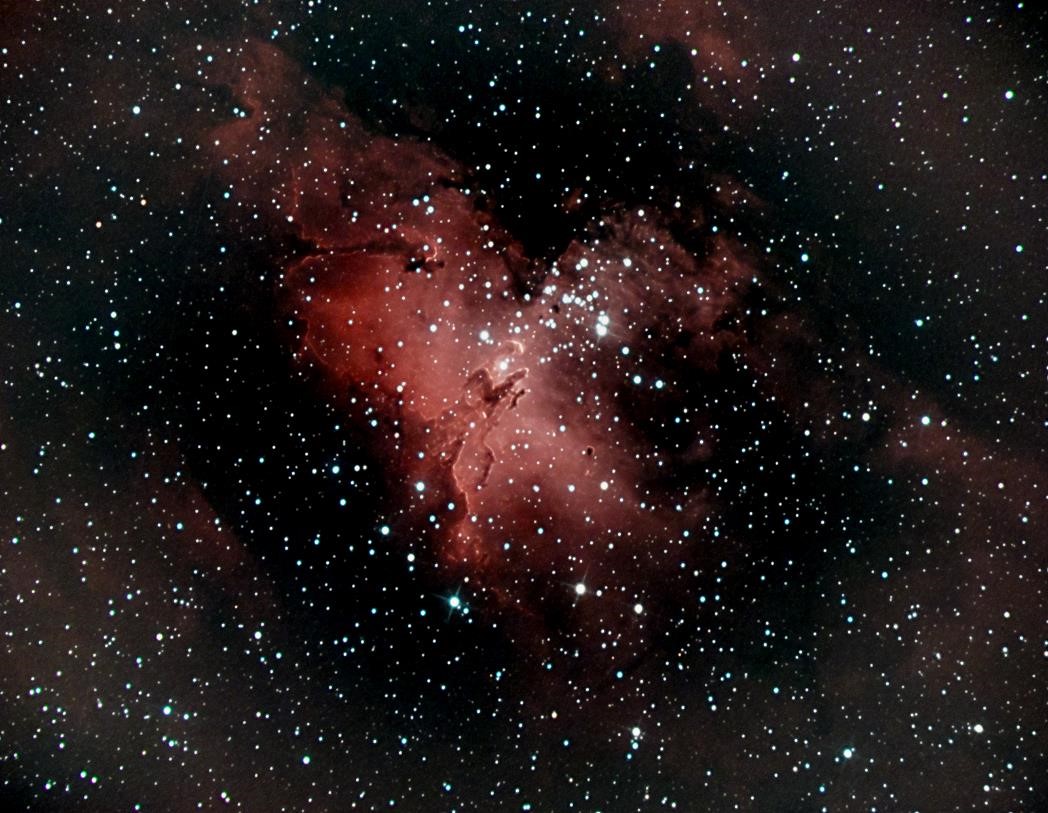 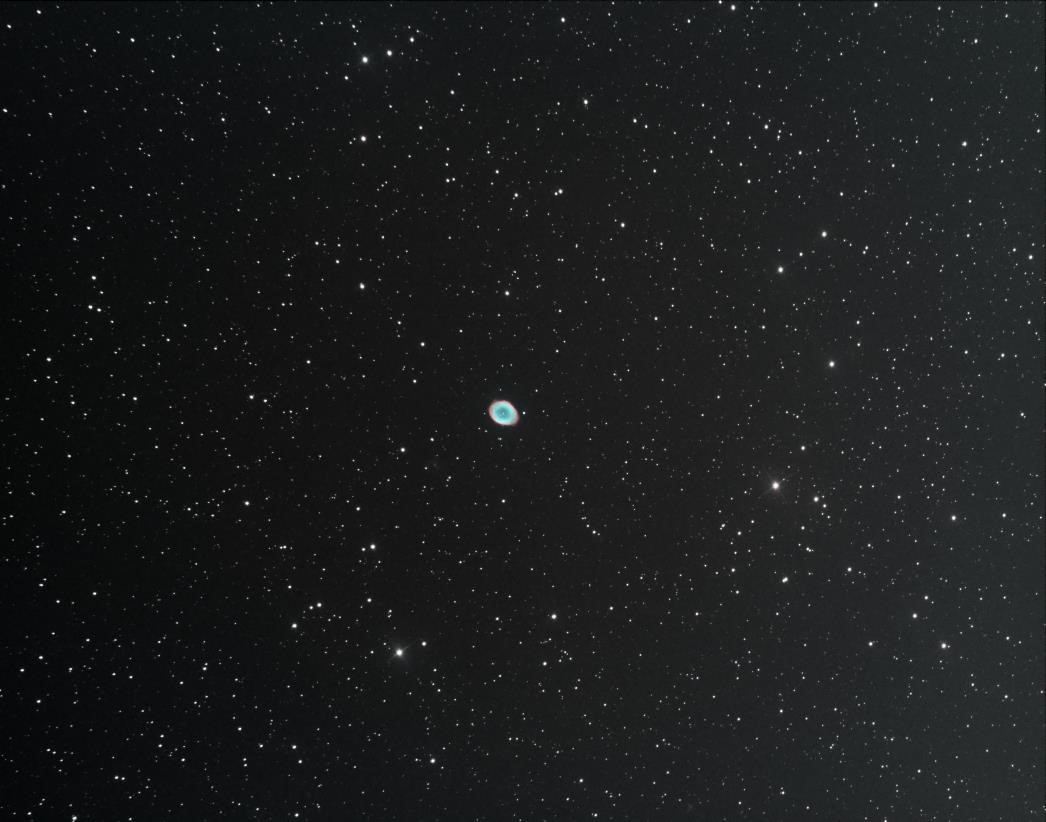 M57, The Ring Nebula, always looks nice. I had a few minutes before dawn on May 19th and grabbed this using luminance,Halpha and Oxygen III filters. Lum – 8 minutes, Ha – 16 mins, O III – 11 mins. It just hangs there in the field. Clickto enlarge.