Skip to primary content
There’s a lunar eclipse happening tonight, which lasts through until the early hours of tomorrow morning, and it’s attracting a lot of media attention. Unfortunately, much of the media coverage is at best misleading and at worst totally wrong. The eclipse happening tonight is a ‘penumbral’ eclipse, which occurs when the Moon drifts through the outer part of the Earth’s shadow. This part is much less dense than the central part of the shadow, the ‘umbra’, so instead of going orange, like it does during a classic total lunar eclipse, the Full Moon will just darken… a bit… and appear more greyish than usual, especially at the top. It’s still well worth watching, because every eclipse has its own appeal, and many astronomers and skywatchers think that the appeal of a penumbral eclipse *is* its subtlety. If you go out to watch it, as long as you don’t expect to see a tangerine- or a Hallowe’en pumpkin lantern-like Moon hanging in the sky, you’ll enjoy it.
The media is also telling everyone how a comet is going to “whoosh” or “zoom” across the sky on Saturday night, and are illustrating their pieces with dramatic photos showing comets from the past with bright heads and long, glowing tails. The truth is rather different. Comet 45P is not going to whoosh or zoom across the sky – in fact, it’s been in the sky for ages already, moving across it slowly, like all comets do. It’s just closest to us on Saturday night, that’s all. And those photos are all wrong because the comet is very small and very faint, far too small and faint for the naked eye to pick up on a dark night – and the nights won’t *be* dark this weekend because a big, bright Full Moon will be drowning out everything else in it! If you know the sky well, and have a chart or map showing where the comet is you MIGHT pick it up with binoculars or a small telescope, but it will be, as they say, “challenging”..!
Don’t be put off looking for the comet and the eclipse. They’re definitely happening – just not in the way much of the media is reporting s breathlessly.
If you want any more info, feel free to ask! In the meantime, here’s a chart showing the times of the different stages of tonight’s eclipse, which we hope you find useful…
Note:  the eclipse will be at its best at around half last twelve. 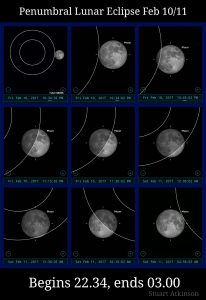