Thanks to everyone who came along go our February meeting at Kendal Museum last night! It was a great evening – very busy, with lots discussed – and the triumphant debut of a new guest speaker too…

After our current Secretary gave an illustrated round-up of recent space and astronomy news – including the latest on Comet CATALINA, the 12th anniversary of the Opportunity rover’s landing on Mars and the possible discovery of a new planet out beyond Pluto – it was time for Simon White to outline his plans fir an observing evening later in the month (see the dedicated page for full details). Then, after the break upstairs, it was our AGM, which resulted in the re-election of existing Committee members, a change of Secretary and the addition of a new member to the Committee. 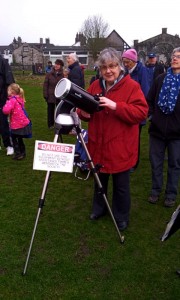 To close the meeting, EAS member Moira Greenhalgh (shown above at last year’s solar eclipse) gave a brilliant talk in the planet Uranus and her fascination with it. This was Moira’s first talk to the Society, so she was understandably nervous about giving it, but she needn’t have worried – she had the room engrossed in her presentation right from the start, talking very personally about why she finds Uranus so interesting. Her talk was illustrated with some beautiful and striking pictures, and at the end the huge round of applause she received was very well deserved. 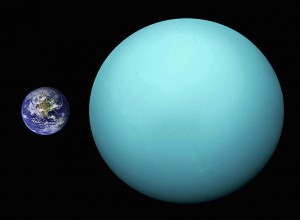 Many thanks to Moira for stepping up and giving us her talk – this is something we’re hoping more members will do this year, and although Moira will be a hard act to follow hopefully she will have inspired others to walk to the front of the room and tell us about their interests and activities.