Here we go.  Happy times – half past six and it’s properly dark.  Welcome to the winter sky!

The constellation of Gemini is rising in the east by mid-evening, with the twins lying down rather than standing up.  Two bright stars represent the heads of the two boys, Castor is first up then his brother Pollux.  Once this constellation gains height, there is a jewel of a star cluster down at the twins’ feet: M35.  I’ll be aiming my camera at this one later.

Constellations overhead include Cassiopeia and Perseus, with the “double cluster” quite easy to find in between.

Climbing high in the sky at this time of year is the fabulous spectacle of the Andromeda Galaxy, M31.  Just visible to the naked eye from a dark location, it is a revelation in a telescope at low magnification, or a good pair of binoculars.  Through the camera, it is indeed spectacular, one of the stock photos of any astrophotographer. 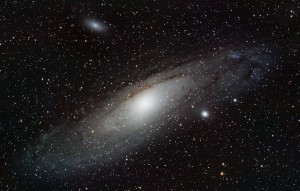 If Andromeda is high up, then the constellation of Pegasus is easy to find, with its giant empty square of four stars.  Taurus will be just to the right of Gemini, its bright star Aldebaran nestled in the cluster of the Hyades.  Orion follows not far behind – another favourite target of the photographers.

For those who can drag themselves out from under the duvet before dawn, there is a very special sight to the east this month.  The planets of Venus, Mars and Jupiter have been aligned together in the sky for a while already, but now they will be joined by the waning crescent Moon from the 5th to the 8th of November.  The best, cloud permitting, should be on the 7th: here they are on the south-eastern horizon at 6am, framed for a 50mm lens on a standard digital SLR camera. 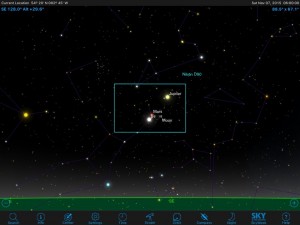 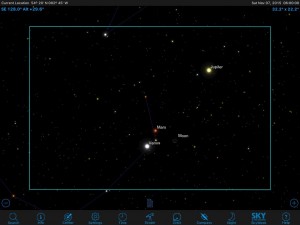 This might even drag me out in the early hours!

For more detail, as always, I commend Ian Morison’s monthly page on the Jodrell Bank website, containing more excellent information than you can shake a telescope at.