March could be a really good month for looking at some of our nearest neighbours, the other planets in the Solar System.  It’s also the time of year when an area of the sky most densely populated with galaxies comes into view.

Jupiter is still unmistakeable in the early evening, being the first object visible.  On the 13th, at about 19:30, it reaches its highest point this month at an elevation of 59° looking due south in the twilight. 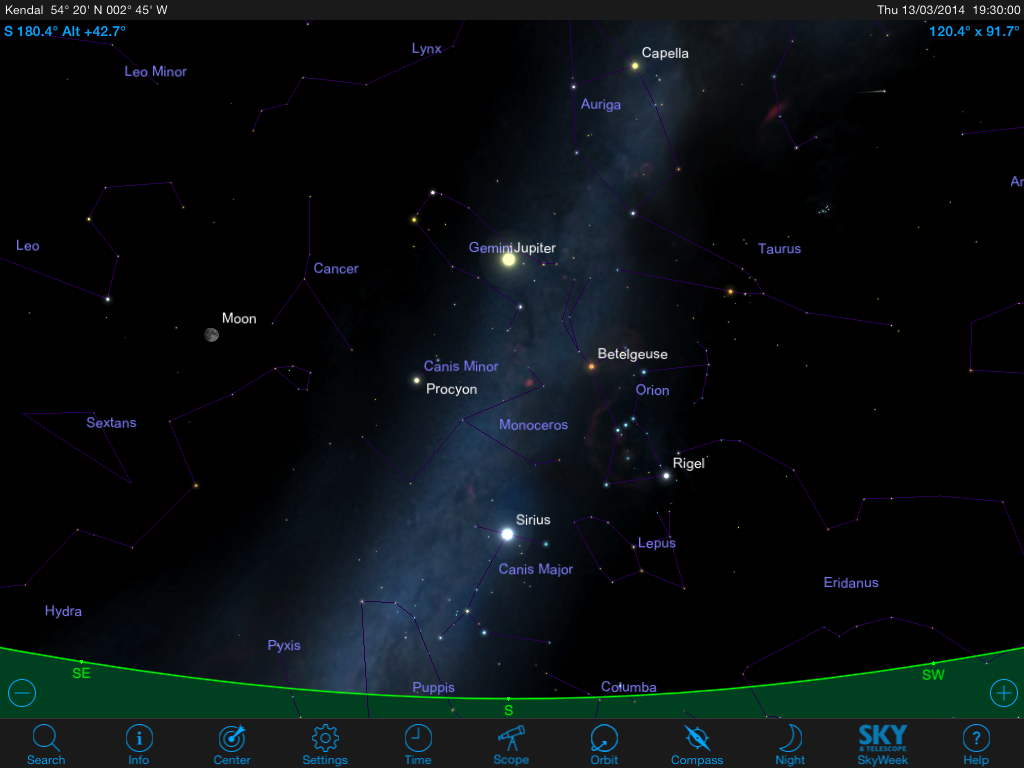 What a sky!  Clockwise from Orion, we have some of the most distinctive stars in the sky, Sirius, Procyon, Pollox & Castor in Gemini, Capella at the top then down to Aldebaran in Taurus.  The Pleiades are up to the right, the Moon is on the left, Jupiter is sitting in the middle, outshining all but the Moon.  That’s a challenging photo, given that it won’t yet be fully dark.  Scout Scar, perhaps?

If you haven’t yet tried, Jupiter will reward patient use of a small telescope.  I can just persuade my four inch refractor up to about 150x magnification, when the bands on the surface of Jupiter can clearly be seen like a railway line across the centre of the disc.

For those (like me) who enjoy astrophotography, the planets can be difficult targets, needing very high levels of magnification to generate good images.  Photographers can enjoy the planets, though, when they appear in conjunction with other objects in the sky.  This month, there are three great opportunities.

Mars and the Moon 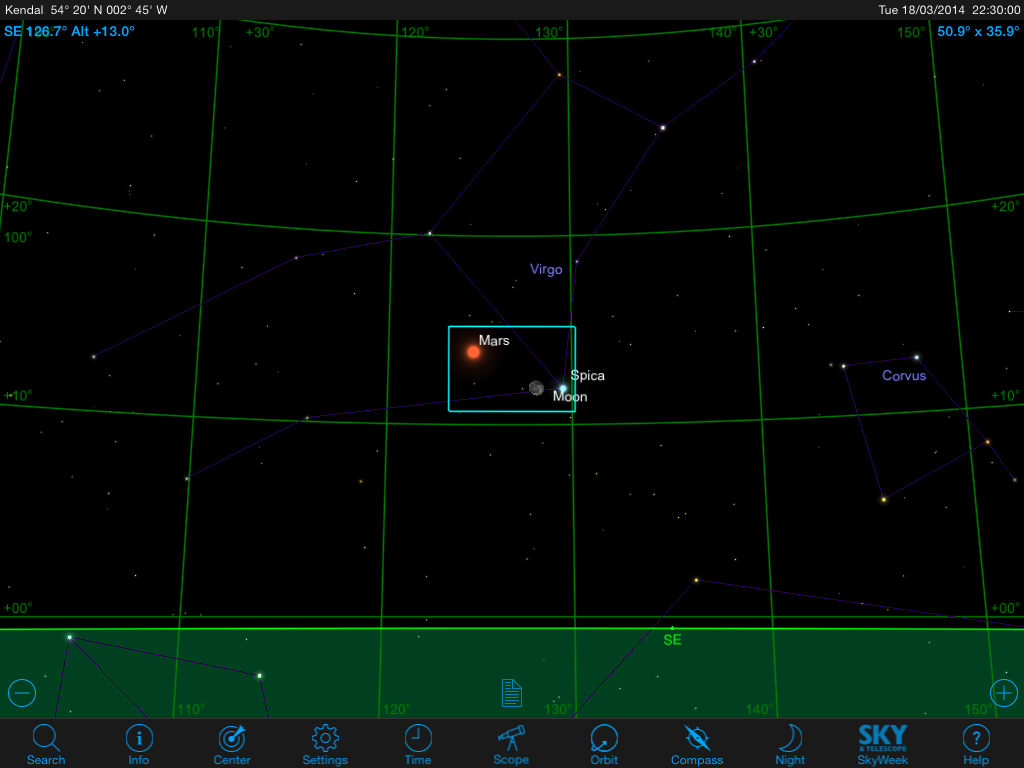 On the 18th, Mars rises with the Moon and will be about 15° above the SE horizon by 22:30.  They will be separated by under 4 degrees, next to Spica in the constellation of Virgo.  I have added a frame to this picture, showing the field of view of a DSLR with a 200mm lens.  That should make a great shot.

Saturn and the Moon 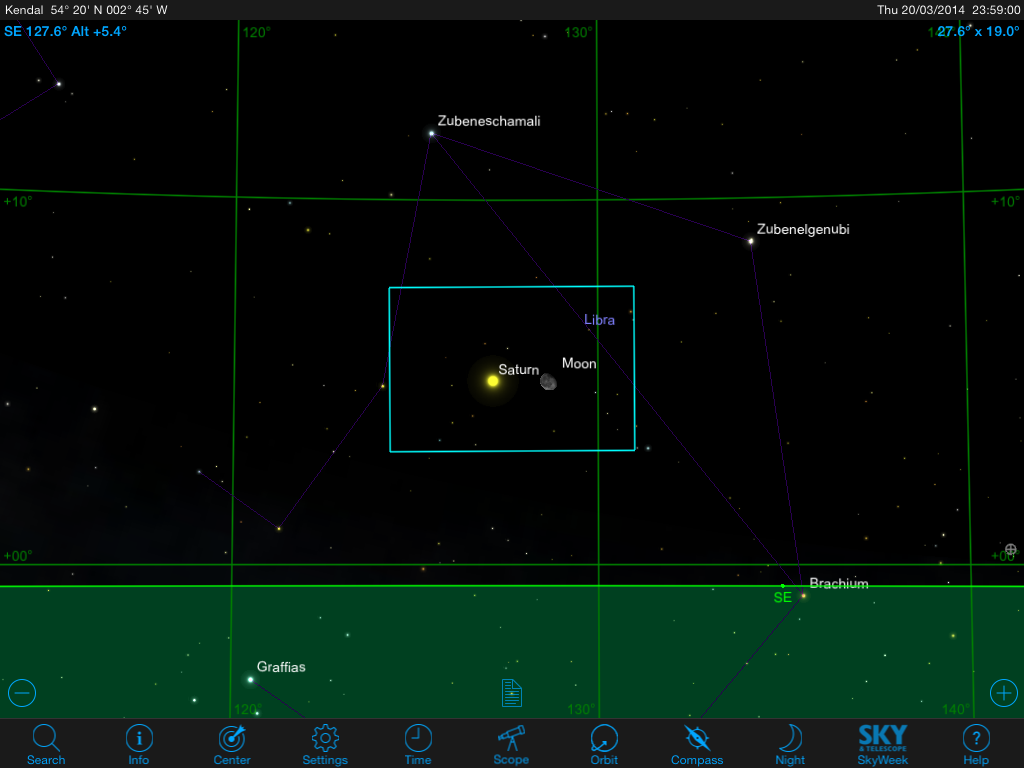 Two nights later on the 20th it’s Saturn’s turn, this time the pairing is only a few degrees above the horizon by midnight but continues to rise to about 19° by 4am.  Saturn is scarcely more than 1 degree from the Moon.  That’s the viewfinder for the 200mm lens again.

Venus and the Moon 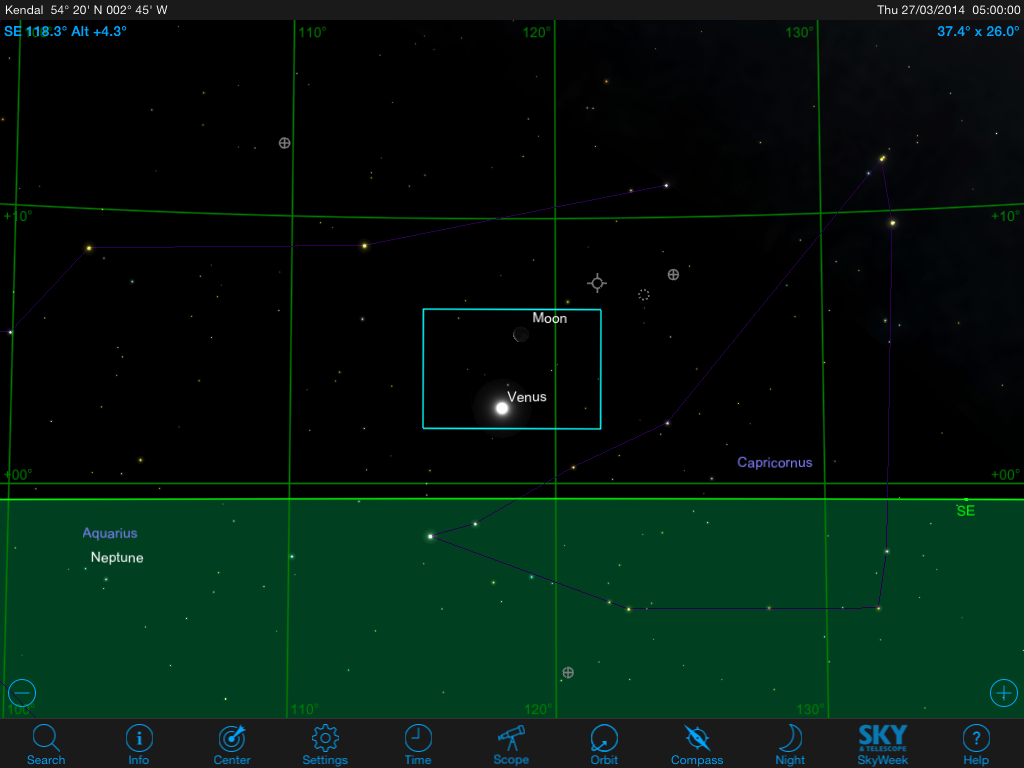 By the end of the month, the Moon is rising just before dawn, and on the morning of the 27th it rises just 3 degrees away from Venus.  This will be a challenge both to see and to photograph, as the Sun will be rising hot on the heels of this pairing.  200mm viewfinder once again.

Leo and the Galaxies

Spring arrives in March, and that means Leo is in the sky from mid evening.  Here is Leo on the 15th of March at 9pm, climbing past 45° in the South-East.  Leo’s curving head and neck on the right make it easy to identify, with Regulus shining at Magnitude 1.4 as Leo’s front paws. 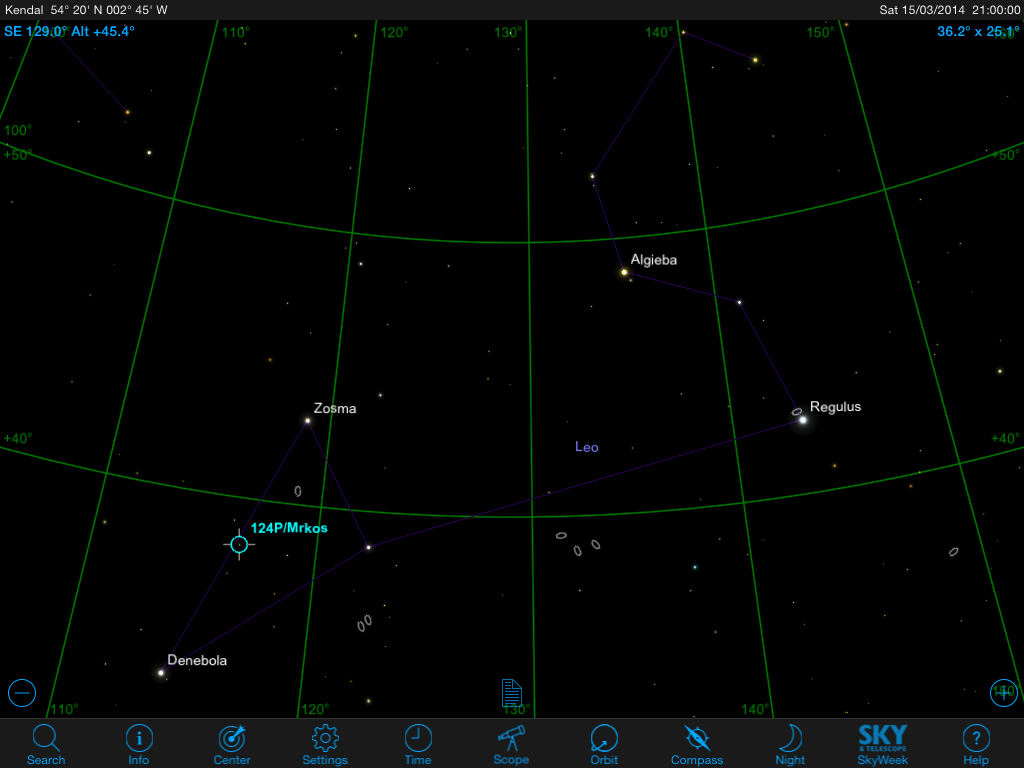 This constellation is home to many galaxies accessible through a good pair of binoculars (50mm should do it, 40mm might be hard work) or a small telescope.  Beneath Leo’s belly, three of Messier’s catalogue of galaxies are huddled together – M95, M96 and M105.  A little further towards the East, under Leo’s back legs, are the three known as the “Leo Triplet” of M65, M66 and the one Messier missed, now catalogued as NGC 3628.

Comet 124P/Mrkos passes through Leo’s tail from left to right during the month, but at Magnitude 14 you’ll need a 250mm (ten inch) or bigger telescope!

More galaxies are to be found behind Leo, but I’ll cover these next month when they are higher in the evening sky.