July isn’t much of an improvement on June, to be honest.  It starts only nine days after the summer solstice, the longest day – or, more importantly for an astronomy society based in Kendal, the shortest night.

At the start of the month, the night doesn’t get beyond nautical twilight – that’s when the Sun is between 6° and 12° below the horizon, and it’s still light enough to make out shapes on the ground.  Only the brighter stars are visible by naked eye, and you’ll need to be out at around 1am for the darkest few minutes.  By the end of the month, astronomical twilight (between 12° and 18° below) returns for about three hours per night, mostly after midnight, but for full astronomical darkness (over 18° below) we have to wait until August.  Payback, of course, comes in the winter months when we can get 12 hours in a single night.

Still, there are opportunities and some great sights in July.

Ceres and Vesta – once in several lifetimes

Ceres, the solar system’s largest asteroid (surface area about the same as India) will appear awfully close to Vesta, the brightest asteroid, early in July.  On the evening of Saturday the 5th, they will be only 10 arc minutes (about one third of the Moon’s diameter) apart.  That’s the closest they’ve been since before the telescope was invented, so grab your binoculars and take a look at something never seen before.

I think the best view will be at about midnight on that Saturday.  From Helsington church, the first quarter Moon will be setting over Whitbarrow, right next to Mars, with Ceres and Vesta just above.  Here’s the expected view approaching midnight, framed for a 50mm lens.  Beautiful! 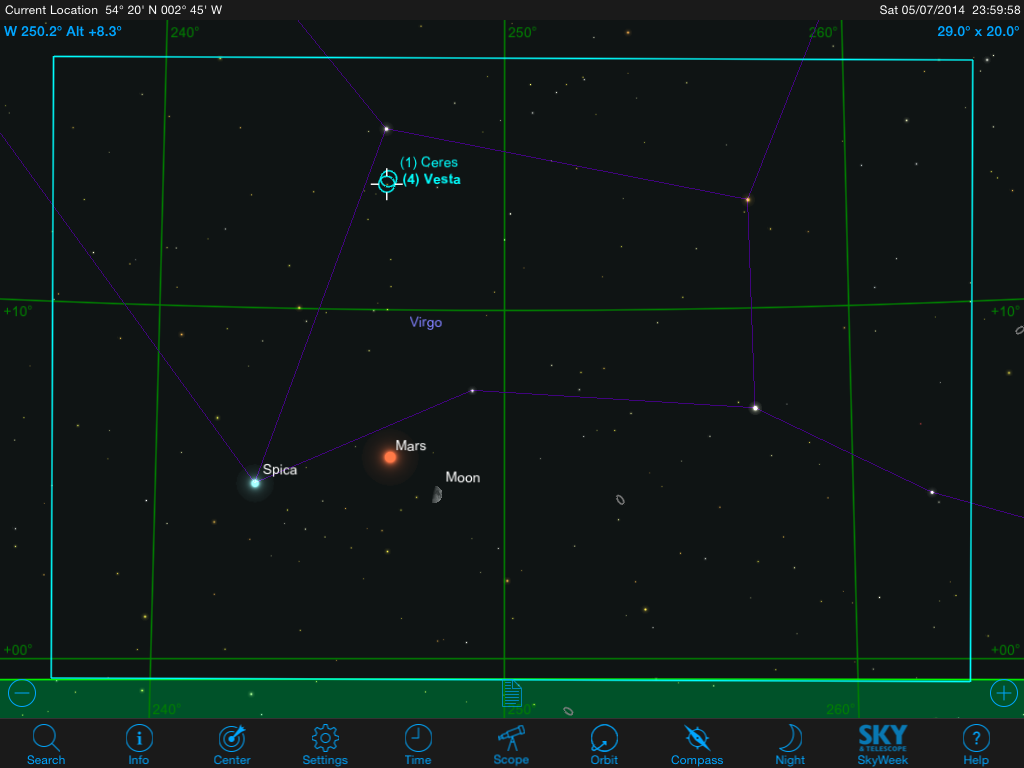 The full Moon on the12th coincides with the Moon’s orbit bringing it close to Earth, so it appears much bigger than usual.  Between 9:30 and 10:00pm it will make its way up over the eastern / south-eastern horizon.  One to frame against Kendal Castle, perhaps?

As the nights do get a little darker towards the end of the month, the “Summer Triangle” becomes a familiar sight high in the south east before midnight.  Comprising Vega, Altair and Deneb, the brightest stars of three summer constellations Lyra, Aquila and Cygnus, it will stay with us until well into December.