Well, I think the 2014 NLC season is now over, although there’s always a chance of a last display before August begins. And after a weak start it was a good one, with several big displays and a few more smaller ones. I hope you all managed to see at least one, I’ve been banging on about NLC for MONTHS!!! 😉

Now August is almost here the late night sky is actually dark again, and the Milky Way is really starting to look good. I was out the other night/morning taking photos, and here’s what I managed. This is a composite of three separate pictures but they were all taken with just a camera on a tripod, no tracking, no following, just a high ISO setting and a short enough exposure to ensure no trailing. A bit of enhancing afterwards – contrast, levels etc – but nothing no-one reading this couldn’t do. You don’t need Photoshop – I primarily use a free image processing package called “FastStone Viewer”. Anyway, here’s what I managed to get… click on it to enlarge it, as usual.

We also have a comet in the sky, Comet Jacques. Around magnitude 6 at the moment, but expected to brighten as it slides up through Auriga, past the Double Cluster and then into Cassiopeia. I took this pic the other night… 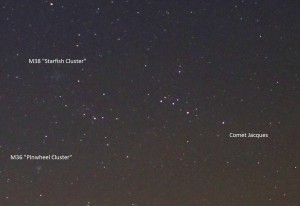 As I said, not much to write home about yet, but *this is how most comets look*, only very rarely do they become naked eye bright with a tail, so get out there with your binocs and take a look.

There’ll be full details about this comet, and more, at our next meeting, when we’ll also have a guest speaker so I look forward to a good turnout for that. Finally, if anyone is interested in the observing weekend up at Ennerdale but hasn’t contacted Carol about it yet, can you get a move on? Thanks!