A successful Moonwatch tonight. Coordinated by Richard, there were 4 scopes and several EAS members present. The Moon was covered by high haze and a nice halo round it but it was clear though the scopes although lacking some contrast. Virtually no stars were visible! The 110km diameter crater Gassendi was showing really well. Initially very quiet but very busy at times later on. 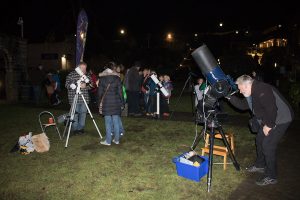 The cloudy halo round the Moon 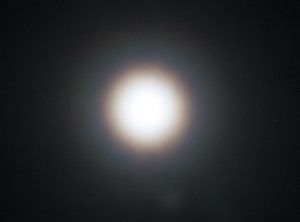 A quick telephoto shot at the end of the event. 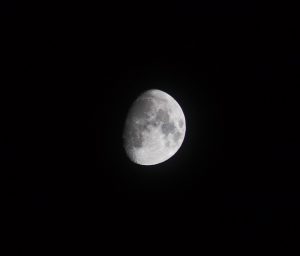 We have a moonwatch next Saturday, January 27th from 1830 – 2100, where anyone passing can view the Moon through our telescopes, weather permitting. The Kendal Brewery Arts Centre garden gives good view southwards and has coffee and toilets as well! Let’s hope for some good cloud-free skies. The Moon should look a bit like this. 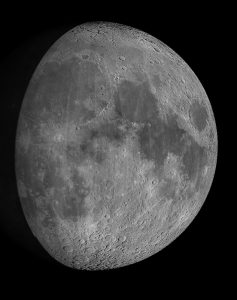 Friends of the Lake District are hosting a FREE Dark Sky event at  Mazonwath near Orton, this Saturday (11th November) at 1830. See https://www.friendsofthelakedistrict.org.uk/Event/dark-skies-star-gazing for more details.

We have the “Telescope Night” meeting on Monday. Anyone with a (portable) telescope, please bring it along to the meeting. The second half of the meeting will be a chance for members to see all the different types, and discuss their merits and drawbacks with the proud/frustrated owners. Don’t be shy if your telescope is of the cheap and cheerful variety – people thinking of buying a first telescope will be thinking of getting one like yours, and be keen to see what is available. Complicated ones are also welcome if you can get them down the stairs.

Hope to see you all there on Monday!

NASA’s Cassini probe has now burned up in the atmosphere of Saturn sending data as it went. Its legacy of fantastic science and stunning photographs will continue. There is a fantastic ebook on the mission on their website https://www.nasa.gov/connect/ebooks/index.html

Following the excellent meeting last Monday with the talk on Women Astronomers by Martin Lunn, the Institute of Physics magazine has just published an article on Professor Jocelyn Bell Burnell. She was recently awarded the IoP’s President’s Medal for her outstandish work in physics, much of which recently has been on encouraging women to go into science. Of course, she is [sadly] known as the women who didn’t get a [deserved] Nobel Prize for the discovery of pulsars [and I don’t think they do retrospective awards]. But she has many other strings to her bow, so I hope you will enjoy the read and learn at bit more about her.

Members might be interested in this article, from the Institute of Physics magazine physicsworld, on Cassini. The mission will end next Friday [15th September] when Cassini dives into Saturn’s atmosphere to avoid possible future contamination of Saturn’s moons.

Eleven EAS members travelled to Lancaster to hear Prof Monica Grady speak on the Rosetta mission. It was an entertaining presentation giving some insight into the difficulties, complexities and timescales of such a mission. We were told why the orbiter and lander were called Rosetta and Philae – it is linked to the famous Rosetta Stone in the British Museum and how this led to the deciphering of Egyptian hieroglyphics. The hope was that this mission would ‘decipher’ some of the secrets of the early Solar System. The instruments, built with late 1990’s technology, were delivered for integration onto the spacecraft in early 2001 and subsequent launch in 2004. The spacecraft flew by several asteroids before hiberbnating for 4 years prior to the encounter with Comet  67P/Churyumov–Gerasimenko (67P)… it did wake on command to much relief and well, the rest we know… The science analysis will go on for several more years.

At the end, there was a lively Q&A with several EAS members asking questions. 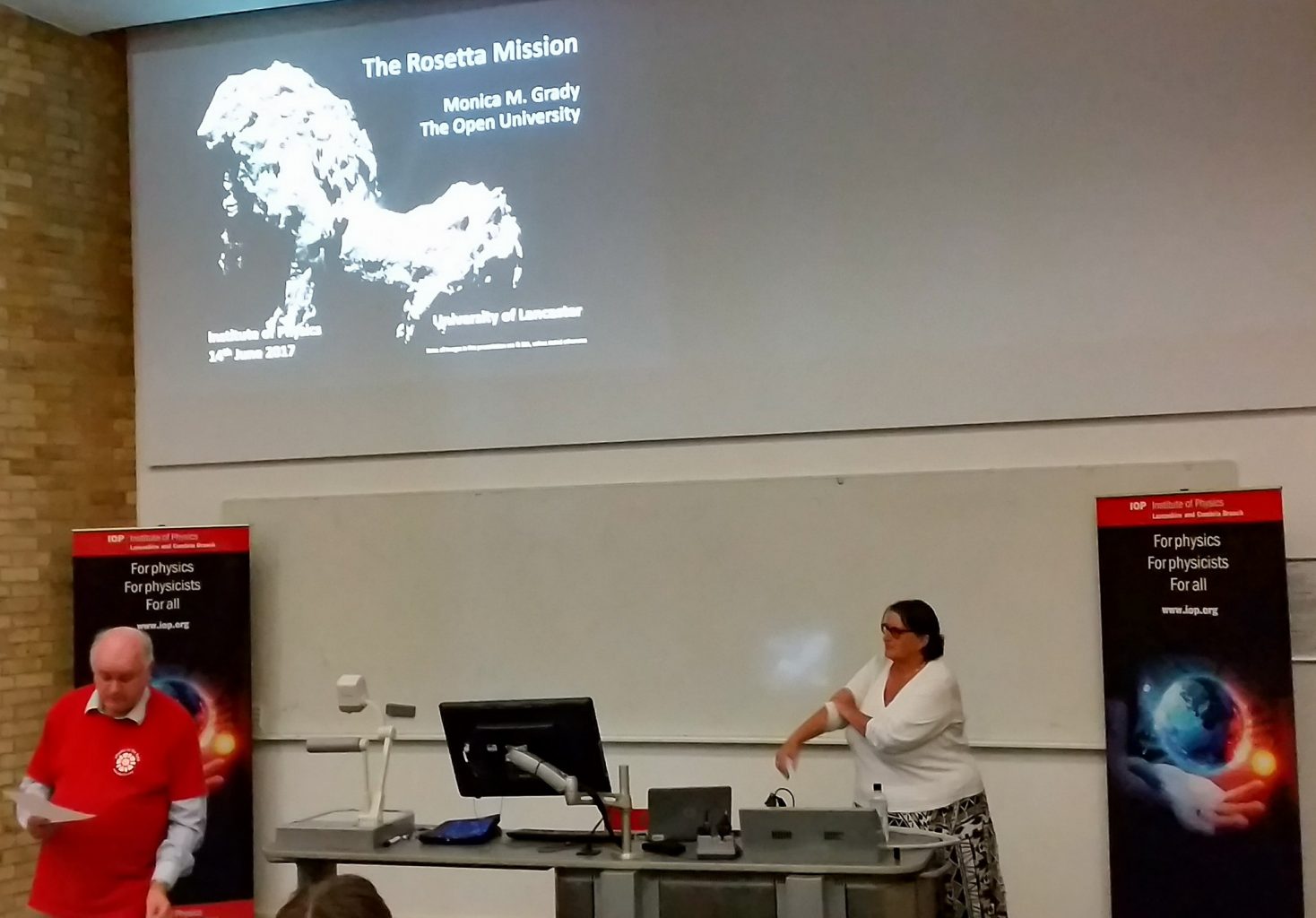 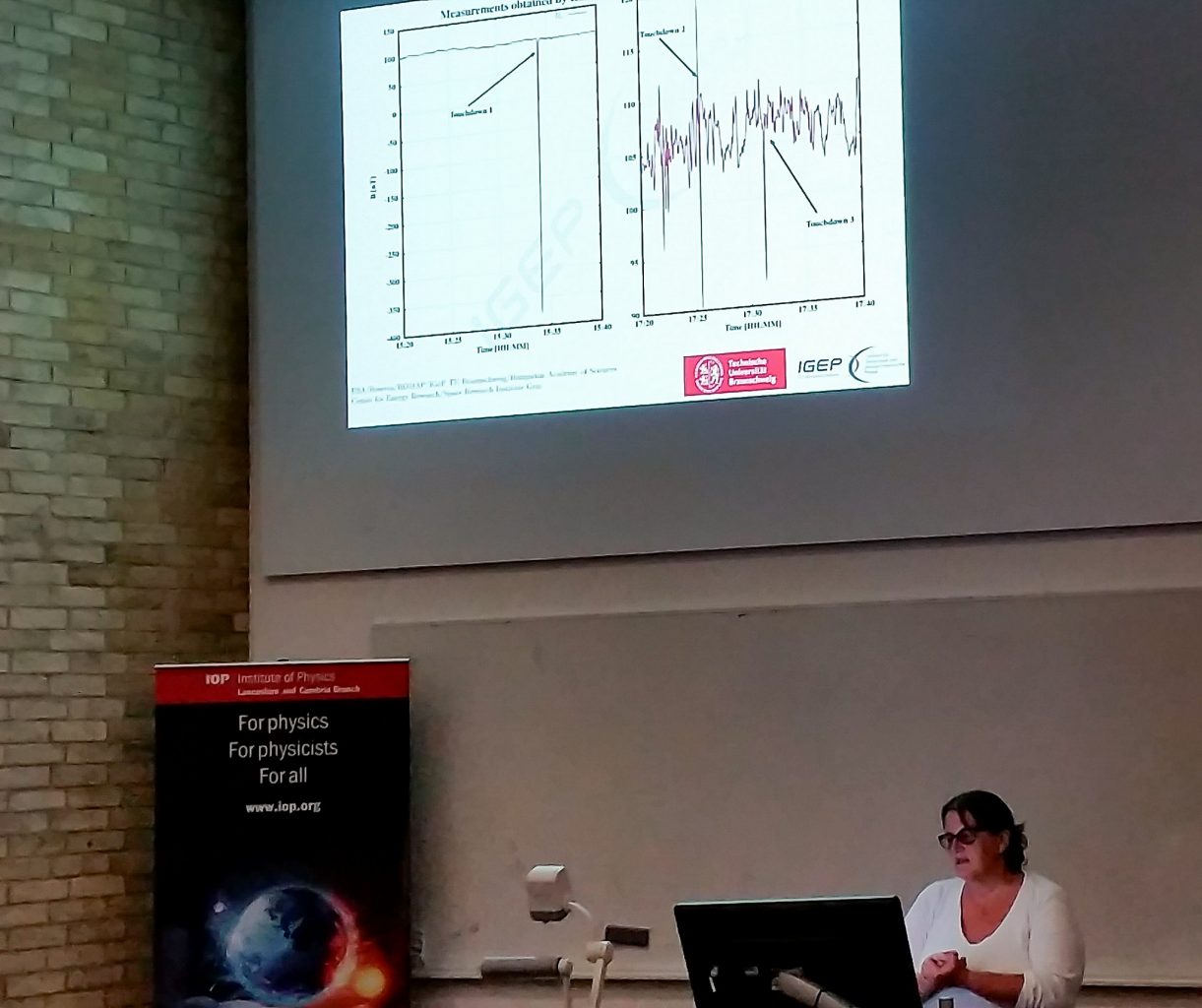